Round 13: Fast and Furious 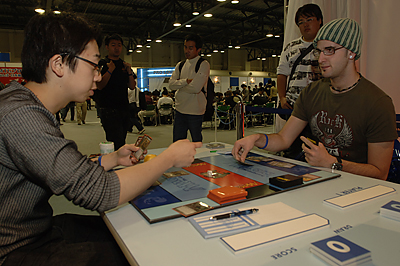 Masami Ibamoto and Bastien Perez reprise their match-up from Round 12.

into this round, Perez was leading the pack at 11-1, while Ibamoto was trailing by just one match at 10-2. These guys actually played each other last round for the end of the previous draft, and it was winning that match that put Perez into the lead.

I didn't get to see their previous match, but this one was a barn-burner. Perez was on the play but seemed slow out of the gates, playing only land until a turn three Thick-Skinned Goblin with

open. Ibamoto had Greenseeker followed by an end-of-turn Ashcoat Bear and then Spike Feeder once the Goblin and Bear traded off. Perez passed the turn with a suspicious four mana up, but Spike Feeder charged in happily. Perez flashed out a Crookclaw Transmuter to block, making itself a 1/3, but Ibamoto had a wrecking-ball Aether Web to send the Bird to the graveyard and promote his Spike to 3/3 in the process. From here, Ibamoto started working his Greenseeker, setting up black and red mana as well as taking out a Slipstream Eel with Dark Withering, thanks to madness.

Bastien was in danger of falling behind but used Sage of Epityr plus Empty the Warrens to flood the table with guys and set up the next four draws more favorably. This ended up mattering immensely, as Perez was able to draw his Lava Axes and land in the right order, allowing him to skip discard for the second one and set up a couple bounce spells to get his weenies in. After several bloody fights in the red zone, it was down to two Goblin tokens in play for Perez and just land on the Japanese player's side. A Mindstab killed off another Warrens Perez had been holding for another spell, but the two tokens kept strolling in, taking 2-life bites out of Ibamoto. But Perez didn't have a ton of life either, so the turns were quite tense as each player went to the top of his deck hoping for a backbreaker. 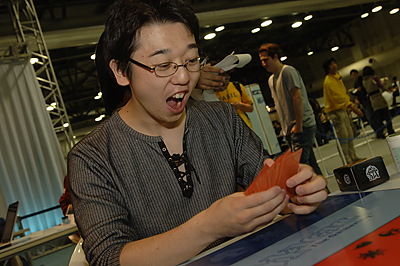 Ibamoto gasps at his draw…

Finally, Ibamoto's deck found a creature, dropping Thallid Germinator at 5 life, but Snapback sent it back, putting him at 3 life after the attack. The Germinator came back down, but a Greater Gargadon was hardcast! Somehow Ibamoto was still in it, using Dark Withering to take the massive monster down. Ibamoto was back in business, casting Sporesower Thallid and another beater as well, going up to a three creature advantage and swinging away trying to finish the game before Perez could find some way to get those final 3 points in.

Visibly excited and with nothing left in hand, Ibamoto sent his team in for what would be the next to final killing blow, but after the attack Perez slammed down a flashed Crookclaw Transmuter, ending the dream. The Japanese player was visibly stunned, just sitting there looking at it a moment, realizing he had no way to block it and just exactly not enough life to survive. He seemed to snap out of it all at once, quickly picking up his cards and going to his sideboard in what had to have been a tough loss. 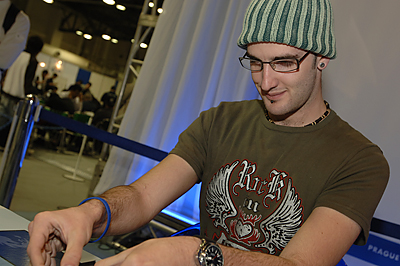 This one was even more exciting. Ibamoto started off with two suspended Search for Tomorrow, but Perez was able to suspend the Greater Gargadon for his own first turn. Creatures were flying in from both sides, often with flash, doing battle and perishing left and right. Perez was slowly pulling ahead thanks to a Gargoyle that kept getting in, but then Ibamoto dropped Gauntlet of Power, which drew quite a reaction from his opponent. Perez's eyes popped out in surprise, then he counted all the power of the three suddenly beefier green creatures coming across at him. He did his best, taking out a creature in the process, and then was able to keep his Gargoyle back on defense to prevent the green creatures from coming in.

Meanwhile, loving all this time and carnage, the Gargadon had counted down to just 4 counters. At that point it was Perez 8, Ibamoto 12. It looked like it was still in the balance, but a couple burn spells plus a Snapback suddenly meant Ibamoto was, at least briefly, down to zero creatures - but that was all the Gargadon needed. Sacc'ing the last few lands needed, Perez was able to bring his Gargadon into play and smash over with the Gargoyle for a total of 12 points, putting it all away in one impressive haymaker.