With scores of 10-2, both of these teams were one win, possibly two, away from clinching a Top 4 berth. The team-up of number one-ranked player Jérémy Dezani, Hall of Famer Raphaël Lévy, and Pro Tour Gatecrash Top 8 competitor Melissa DeTora was clearly the favorite here, however their opposition were no slouches either. Daniel Gräfensteiner had made it to the Top 8 of a Pro Tour in 2010, the same year his brother Tobias reached the finals of a Grand Prix, and more recently, in fact just last week, Christian Seibold made it to the Top 8 of Pro Tour Born of the Gods.

Interestingly, both teams had built the same basic set-up of decks. Raphaël Lévy and Daniel Gräfensteiner were piloting blue-green, even though Gräfensteiner's was somewhat more aggressive and based on heroic. Jérémy Dezani and Tobias Gräfensteiner both had red-white heroic decks, and Melissa DeTora and Christian Seibold both came equipped with blue-black. Nevertheless, the actual games here wouldn't feature any mirror matches, since the teams had put their corresponding decks at different positions.

Instead, to start things off, there was the pairing of Raphaël Lévy (UG) versus Tobias Gräfensteiner (RW).

This Gräfensteiner opened on Favored Hoplite, then added, on consecutive turns, Ordeal of Heliod,, and Eidolon of Countless Battles. Lévy could just shake his head in the face of such power. 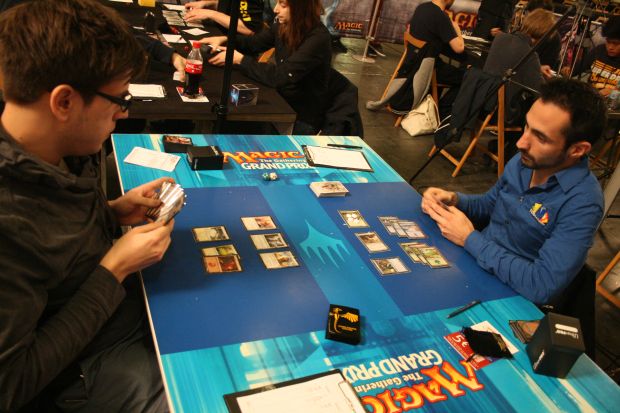 For the second game, Gräfensteiner again opened strong with Favored Hoplite and Akroan Skyguardbut stumbled over mana issues. With his opponent stuck on two lands for most of the remainder of the game, Lévy was able to cast Nessian Asp and turn it 8/9 and that rode to victory boosted by Nylea's Emissary.

In the third, Lévy then had all the answers to Gräfensteiner's considerably slower draw: Fated Intervention for , Fade into Antiquity for Heliod's Emissary, Shredding Winds for . While Gräfensteiner hit a string of lands, Lévy followed it up with Snake of the Golden Grove and boosted it with Thassa's Emissary to take the win.

Then there was the pairing of Melissa DeTora (UB) versus Tobias Gräfensteiner (UG).

Staunch-Hearted Warrior plus Stratus Walk plus Time to Feed, and  plus anotherStratus Walk gave the first victory to this Gräfensteiner.

In the second game, however, DeTora's deck showed a surprising turn of speed with Nyxborn Eidlon,Blood-Toll Harpy,  for her opponent's Setessan Oathsworn. Shrike Harpy andShipwreck Singer added further pressure. Gräfensteiner may have been able to recover with the help ofCentaur Battlemaster and 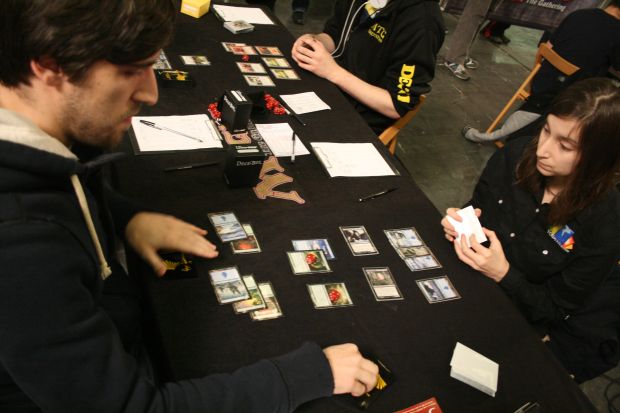 Setessan Oathsworn, Reverent Hunter, Boon Satyr, Stratus Walk, and three lands was Gräfensteiner's opening hand for the final game. Quite the good draw, and it did indeed carry him to victory.

Dezani swarmed the board with Akroan Crusader, Favored Hoplite, Traveling Philosopher, , and Nyxborn Shieldmate early, but Seibold had Baleful Eidolon and  to hold the fort. After the amazing start, Dezani appeared to be out of gas, whereas Seibold had only just begun.Shipwreck Singer, , and Aerie Worshippers soon took over the game. 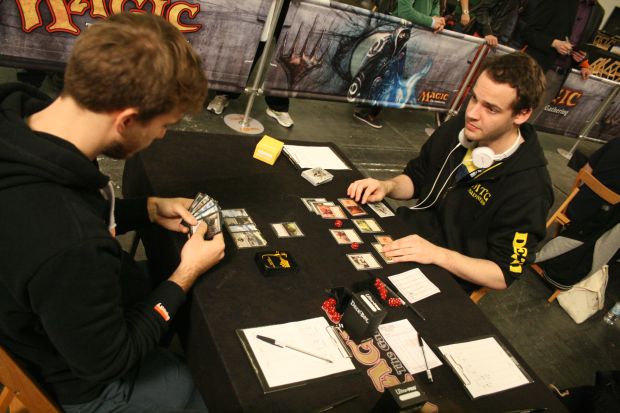 The second game played out very similar to the first. Dezani's initial rush brought Seibold to 4, then he stabilized with the help of Bile Blight and the once again amazing Shipwreck Singer. Dezani made a little headway on the board with Dauntless Onslaught, though that was as far as he got. Fabled Hero made it interesting once more but was shortlived, and a couple of turns later Seibold felt the need to tap out with  to force Dezani's Wingsteed Rider to attack and die. If Dezani had had anything then, the game would have been wide open again. Alas, he didn't and Seibold's bigger creatures took over and took the game and match.