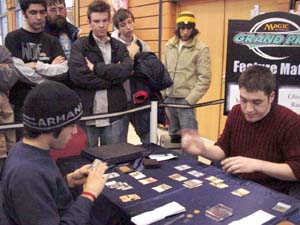 back in GP Florence Kai Budde dumped an unhappy Stephano Fiore out of the top 8 in the last round of the swiss. A different Italian and a different Fiori but the stakes are still high. Both players need to win out and Budde's task is going to be hard as his opponent has 3 Spikeshot Goblin.

Budde won the coin flip and elected to go first. He did nothing exciting until turn 3 when he dropped a Neurok Spy. Fiori trumped that by dropping a Shrieker with two artifact lands and a Talisman in play.

Budde brought out a Cobalt Golem and left mana open to let it take to the air and bring down the troublesome Nim. The German was under the cosh as Fiori swung at him with a Pewter Golem. An Electrostatic Bolt shot the Golem out of the skies before it could intercept and an Atog was added to the assault.

Budde tried to fend off with a Skyhunter Cub and Knight. Unfortunately for him Fiori had Fists of the Anvil and was able to smash through enough damage to bring the game to a quick end.

Fiori tried to get a quick start in Game 2 but his turn two Myr was Annulled and he skipped a land drop and had to go with the slower Talisman option. Meanwhile Budde looked ominous as Loxodon Punisher picked up some Vulshok Gauntlets. 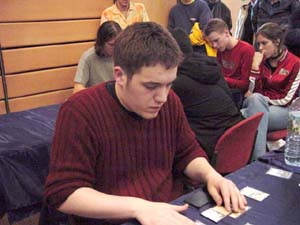 It was a bit slow to switch the Gauntlets around though and Fiori could come back into the game with a Spikeshot Goblin and then a Pyrite Spellbomb on the Punisher in response to Budde giving them the Gauntlets. Fiori also made a Nuisance Engine and started spitting out some pests.

Budde would have some trouble getting through, but also so would Fiori – he had to get past Bottle Gnomes with Gauntlets and Scythe of the Wretched.

Fiori made the odd play of Detonating the Gnomes, but it didn't appear Budde had a great deal to do. He did have a Soul Nova and that got rid of Fiori's hasty Berserker.
A Neurok Spy with the Gauntlets threatened to take the fight back to the Italian, but Budde chose to block with it and it was smahed to the floor with Fists of the Anvil.

The game still looked to be returning in Budde's favour as his deck started dropping bombs. First out was a Luminous Angel. Not content with that he backed it up with a Clockwork Dragon. Fiori's two Spikey's and a Clockwork Condor didn't look quite as effectual and sure enough he packed it in a couple of turns later. 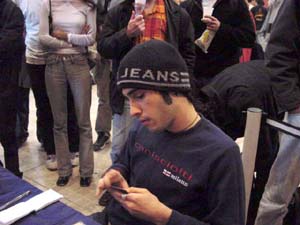 With a sigh Budde was forced to throw back his first hand. Then there was a slight delay as Budde noticed one of his sleeves was marked and had to desleeve his deck. He drew his six cards, announced he was fine and the game could resume. As in the game before Fiori had his second turn mana acceleration Annulled. He found a third land for a Spikeshot Goblin but then his deck got a little stubborn as no more land was forthcoming.

Budde started beating down with a Soldier Replica and Skyhunter Patrol. His Punisher met an Electrostatic Bolt.

Still no land for the Italian though and he even had the indignity of losing a Spikeshot Goblin to a Soul Nova as he attacked with it as he was using the mana to cast a second.

If Fiori could deal with Budde's Patrol he might be able to turn the game around as Budde seemed to only have land. Unfortunately he drew a Luminous Angel and then the Italian was all out of options.