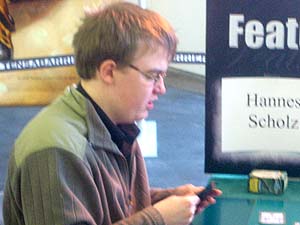 players are known in Germany, even if none of them managed to put an international success on their record - both are still amateurs - and were in a good position to get some of the winnings. Kolja has been playing since 1993 and is from Saarbruecken. Hannes usually plays Magic Online - since there are not many Magic-players in his hometown, Hof an der Saale. At 31 points both players need two more wins to make it into top eight.

Kolja plays a red/black deck, that features 14 good creatures, a lot of removal and a Bosh, Iron Golem! Hannes drafted a very fast white deck, with splashes of green for One Dozen Eyes and red for Spikeshot Goblins. He only lacks equipment for his Spikeshots, Den-Guards and Sky Cubs, with only one Loxodon Warhammer and one Golem-Skin Gauntlet.

Kolja started off with a second turn Iron Myr, while Hannes answered him with Golem-Skin Gauntlets and an Alpha Myr. Kolja played a Goblin War Wagon, and Hannes made a Spikeshot Goblin to put some serious pressure on the table. Kolja swung in with the Wagon and detonated the Gauntlets to prevent the Spikeshot from getting bigger and dealing double damage.

Hannes Alpha Myr swung in, and the Spikeshot took down Koljas Iron Myr. Kolja played his fourth swamp - with the death of the Myr obviously lacking red mana - and sent the Wagon into the red zone again without playing anything else, while on the other side of the table a Gold Myr and a Tel-Jilads Archer increased the pressure. Kolja finally drew a Mountain and played a Goblin Replica.

In Hannes following turn he sent most of his team in the red zone - the Alpha Myr traded with the War Wagon, and the attack took Kolja down to 12. Afterwards One Dozen Eyes produced five small Insects. Things looked grim for Kolja, who couldn't play anything of his own. Hannes attacked again, took Kolja down to 5 and made a Clockwork Condor. Kolja Consume Spirited the Spikeshot to death but it was not enough. He died next turn.

Neither one of the players sideboarded.

Kolja started again, but had to send his hand back - he had only drawn one land. He kept his second hand. Hannes also kept his hand - with only one land and a Myr. And indeed he missed the land drop on his second turn. But on his third turn he found his second land and could finally put some pressure on the table with the leaden Myr, who joined an Auriok Transfixer, followed by the mighty Leonin Abunas on his next turn.

Meanwhile Kolja was stuck on two lands. When he finally found his third land, he couldn`t cast a creature but made Vulshok Battlegear instead. The swing from the opposite side took him down to 13, and problems increased with a Skyhunter Cub. Kolja tried to spirit the Myr away, but since it couldn't be targeted due to the Leonin Abunas he made a Nim Shambler instead. The next attack took him down to 8, and Hannes added Spikeshot Goblin and Alpha Myr to his side of the table. Now Kolja could drain the Spikeshot dry, going up to 10 life.

Hannes sent everything into the red zone, Kolja traded his Shambler with the Cub and went down to 4. To make it even more humiliating Hannes played a Clockwork Vorrac. Kolja was rather unhappy about that, got rid of Leonin Abunas with a terror as a final gesture and accepted his fate.