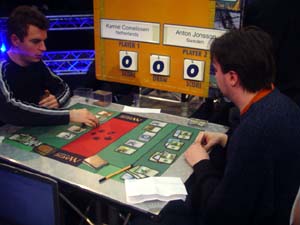 been a lot of speculation among players about what record will be needed to make the Top 8. The best guesses have thirty-four points as the mark of safety. That's good news to Sweden's Anton Jonsson, who's sitting pretty on thirty-three with three rounds left to play. Likewise for Cornelissen, who hasn't seen Sunday in a while, and for whom a win would mean a return to greatness.

Cornelissen led off with Chromatic Sphere into Copper Myr, while Jonsson started the beats with Tel-Jilad Chosen. He added a Wizard Replica while Cornelissen fetched a pair of lands with Journey of Discovery. Then a second Chosen joined the fray. He laughed at his "fast beatdown". Cornelissen was happy to trade his next plays of Chosen and Krark-Clan Grunt straight-up for Jonsson's two Chosen.

"In that case, I take five." - Anton Jonsson

Cornelissen made an Icy Manipulator and passed it back, neatly shutting down Jonsson's play of Mask of Memory. He hit in the air with his Cobalt Golem when the Replica was tapped down. Cornelissen hit again for five and dropped Rustmouth Ogre. All Jonsson could manage was another Cobalt Golem. By then he was low enough that he had to stay on defense. He did have a Deconstruct for the Icy Manipulator, but Cornelissen dropped Clockwork Condor to keep him from getting any free Mask hits.

Jonsson started chumping, and didn't stop until he was dead. 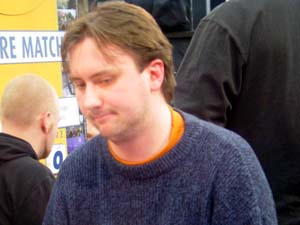 In a complete reversal of the first game, Cornelissen got to spend the early turns getting free hits with Tel-Jilad Chosen while Jonsson did nothing but Journey for two lands, then play Mask of Memory, then Gilded Lotus. Unfortunately, Cornelissen had no more inexpensive monsters to punish Jonsson's sluggishness. In his hand were Rustmouth Ogre and Malachite Golem.

"Are you afraid?" - Anton Jonsson

Cornelissen laughed and admitted it. He got some lands of his own and gave it back to Jonsson, who untapped with great relish. He tapped his mana with determination, finally stopping when he had enough for Living Hive. He put Mask of Memory on it and gave it back. Cornelissen made the Golem and held back, hoping for the best.

That was certainly not what he got. Jonsson smiled wide and tapped a lot more mana, summoning the Trolls of Tel-Jilad and making his Hive invulnerable. Cornelissen even let him hit once before conceding.

Cornelissen showed a new strategy for the deciding game. Electrostatic Bolt took down Copper Myr, and then Molten Rain cracked Jonsson's only forest. He played a second island and was done. Cornelissen played Journey of Discovery, and still Jonsson had no third land. Fangren Hunter came down hungry.

Finally, a forest, and with it Bottle Gnomes. Jonsson accepted four damage and watched as Cornelissen added Tel-Jilad Chosen and Copper Myr to the table. Jonsson played a Journey of his own. Cornelissen hit him for six more and dropped Icy Manipulator, further complicating things for the Swede. 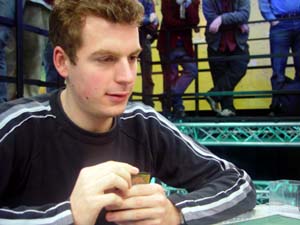 Jonsson smashed it with a Deconstruct and dropped Tel-Jilad Chosen. He needed a little more. Cornelissen brought him to five, losing his Chosen. Jonsson played an Archers and fell to one. Kamiel was running out of gas. He ripped Malachite Golem and put it into play. Jonsson frowned. He spilled out Aether Spellbomb and a second Archers, tapping out. He gave it back to Cornelissen.

Cornelissen drew Electrostatic Bolt. He thought hard, then swung with all his men. Jonsson considered his options before putting both Archers in front of the Golem and the Bottle Gnomes in front of the Hunter. Cornelissen turned over the Bolt, and earned a handshake.