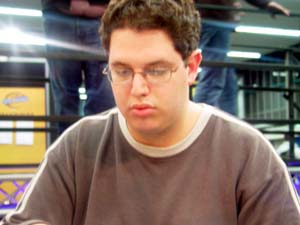 countdown to Mike Turian's retirement has begun. His fiancee Rachel took a job as a programmer at Wizards and by DCI rule he will no longer be able to play in sanctioned Magic tournaments once they move in together. Now that is love boys and girls!

Many people have speculated that this menat Mike would have to win this Pro Tour. He had a tough road to climb, needing two wins in his final three rounds to even get a shot at winning the whole thing. His foe this round was no slouch.

Like Turian, Nicolai Herzog has a couple of Top 8's under his belt but no trophy check on his wall. He also needed two wins to secure a slot. Both players had good decks and each had Loxodon Warhammer. They were both beneficiaries of repeated common runs in the last set of packs. Mike had four Beserkers and Nicolai had five Consume Spirits-not that he was thrilled about it.

"I kept waiting for the last few packs to toss me a Myr or an artifact land-I would have taken those over just about anything."

"Instead you kept getting the Drain Lifes-here have another every pack!"

Mike was prepared to present his deck but quickly took it back for a last minute deck count. While he counted Nicolai explained, "We once played an important match where he took a game loss for presenting a forty-three card deck."

Turian laughed, "I played Finkel the round before with forty-three without knowing."

Once everything was confirmed to be at forty the match was underway. Nicolai's second turn Scimitar was trumped by a Leonin Skyhunter. Nicolai followed up with a Serum Tank while the Skyhunter pursued its prey.

Herzog played a fourth turn Nim Shambler and Turian Raised the Alarm EOT, "Shocking I am sure." Mike had no fourth land and appeared agitated at all the cards he couldn't cast sitting in his hand as he played a Wizard Replica.

Nicolai began to use his Serum Tank and sent his equipped Shambler into battle. Mike missed another drop and played a Steel Wall-Nicolai fell to nine on his attack.

Nicolai played an Enforcer and sent in his Shambler. The Wall blocked and Turian went up to twenty-one thanks to an Awe Strike. Mike looked to have it all in hand despite no lands when Herzog dropped to six. The next turn Herzog played a Warhammer and began to undo all of Turian's hard work-he won scant turns later.

Mike led off with a Skyhunter Patrol again and missed his third land drop. Nicolai, meanwhile played a Scimitar and a Warhammer over the first three turns. Mike was still stuck on lands and pleaded with his deck. Nicolai Consumed the Spirit of the flier.

A Mountain allowed for a Soldier Replica and he was dwarfed by Herzog's Pewter Golem. Mike bought precious turns with Awe Strike on a Warhammered Pewter Golem and climbed to a comfortable twenty-eight. He was able to Rustspore Ram the Warhammer and Mike was back in the game.

Nicolai played a Serum Tank but when he choked on a succession of lands over two turns, Turian was able to force through enough damage so he could polish Herzog off with a Longbow.

As they settled in for the final game, Turian extended his hand and wished his opponent well, "It has been fun playing against you no matter how it turns out. It is rare that you get to play against such a formidible opponent for three straight hours. 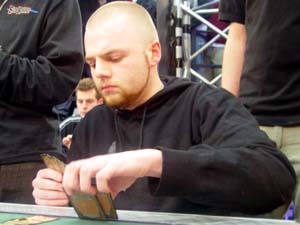 Mike's good cheer began to erode when his third turn Grunt was Terrored and Nicolai untqpped to cast Goblin Charbelcher. Mike sighed, "I always like to see more randomness on the Pro Tour."

Nicolai managed to smoke every creature he took aim at. The only time he whiffed was one he turned the muzzle toward Mike. Even a Solar Tide offered Mike little help as Herzog was able to regenerate his Nim Shambler and Pewter Golem. Mike could not keep a creature on the board and conceded degectdedly when Herzog showed him a Consume Spirit.