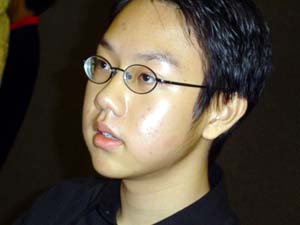 players were thinking about a draw this round but just as Olivier had run through the math for the young Malaysian he stopped himself short and realized, "I am so bad at math, we have to play." In fact, Olivier needed to win out with his deck in order to make Top 8.

Olivier tried to keep the tension out of the match with humor, "You have a die?"

"That is okay, I will play first…"

Terry laughed and offered Olivier the choice between two face down cards. The highest casting cost would choose. Terry won the "flip" but it was Olivier who led off the action with a Lifespark Spellbomb and followed with a Talisman. Terry had a turn three Gold Myr. Olivier cycled EOT. Olivier untapped and played Atog and Skullclamp. He equipped the Tog and sent back the turn brimming with confidence.

Terry played a Rustspore Ram and Olivier announced, "I have a response." He sacrificed the equipment to his Atog and tried to make the best of a bad situation, "Sometimes I impress even myself."

He untapped and Fabricated for a Viridian Longbow and played it. Terry cast a Nim Lasher--perhaps to deflect attention from his Myr. Olivier paid full retail for a Spire Golem and when he passed the turn Terry Shattered the Longbow. He played a Drill Skimmer on his turn.

Olivier paid two for a Dross Golem and attacked with Atog and Spire Golem. Terry nudged his Ram in the way of the Tog and Olivier ate a land to kill the 1/3. He played a Hematite Golem post attack. Suddenly Terry was in danger of being overwhelmed and he pushed his Drill Skimmer and Nim Lasher into combat. Olivier thought about blocking and eventually put his Hematite Golem in front of the 3/1 Nim Lasher. He was tapped out and Terry stunned him with a Scale of Chiss-Goria that boosted it's power and toughness. He played a Vulshok Berserker after combat.

Olivier got in for five with his golems and was down to one card. It was Essence Drain and he killed the Nim Lasher and went back up to twenty. Olivier looked at all the cards in his bin compared to Terry's and sighed, "You know you are playing badly when you have three times as many cards in your yard as they do."

Terry had another Berserker and attacked with both and the Gold Myr. Olivier traded a Talisman for the Berserker when he put his Atog in its path. Drill Skimmer took down the Dross Golem on Olivier's attack and Terry took out the Atog with Irradiate on his own turn.

Olivier laughed as he drew Arcbound Worker. He played it with his best karate sound effects and attacked with his flier. Terry kept plugging away with his two creatures and the Worker jumped in the way of the 3/2 and made the flier a 3/5. He cast Thoughtcast for four mana and found a Gold Myr. Terry fell to two with no flier in sight. He kept up the attack and stayed alive with a Consume Spirit for four.

Olivier cast Chittering Rats and Terry put a card on top of his deck. The Frenchman swung for three and Terry knew there were no answers awaiting him.

"This is just my impression but I think I played all my good cards while you didn't draw much."

Olivier gnashed his teeth when Terry announced, "I will let you go first."

Olivier had three types of land and an Atog in play on turn three. Terry accelerated into turn three Berserker with a Gold Myr. Olivier tried to keep his foe at bay with his Tog in the upright position and a Lifespark Spellbomb. Terry attacked and Olivier laughed as he adjusted his life totals, "It could have worked."

Terry played Grimclaw Bats and Emissary of Despair. Ruel cycled for a land. He found one and played Dross Golem. Terry drew Specter's Shroud and equipped his Emissary and attacked with everyone. Olivier double blocked the ground creature and took seven in the air and lost a card.

Ruel's draw step yielded nothing he could cast and they moved on to the rubber game of the match. 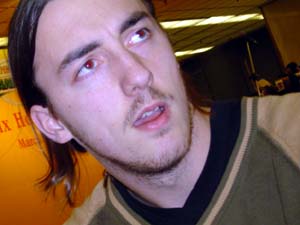 After much debate, Olivier decided to play. He opened with an Arcbound Worker. Terry took a couple of points and played a Talisman. Olivier had a turn three Dross Golem but he was not willing to trade it with Terry's Berserker. Olivier grinned and played Skullclamp. He drew two cards off of the Worker and attacked for four. He played Welding Jar and Gold Myr to boot.

Terry had the Disciple of the Vault and attacked for three. Olivier went to draw a pair of cards with his Gold Myr but Terry stopped him with Irradiate. Olivier's Pewter Golem was met with Consume Spirit and he ate the Welding Jar to save it. Terry packed it in one turn later.

1 Disciple of the Vault 1 Necrogen Spellbomb