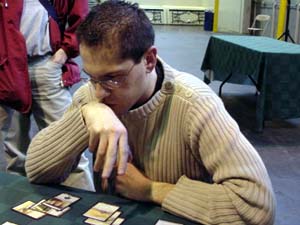 two rounds to go it's crunch time for the competitors. Barbero was undefeated at one point with only a draw to keep him from the top as they went into day two. Courtois quietly won his way up to draft on the top pod. But now an early loss this draft has turned this into a straight knockout. Both players need to win to have a chance of advancing.

Barbero started with a Leonin Shikari to Courtois' Glaivemaster. Both players played Slith Ascendants that traded in the skies. Then Barbero took advantage of Courtois' inaction tom bring out a Razor Golem and Pteron Ghost. The Fireshrieker that followed looked especially dangerous with the Shikari in play.

Courtois cast a Weaponsmith and fetched a Viridian Longbow out of his deck. Barbero attacked with Ghost and Golem, but left his Shikari back on defence. Courtois chumped the Golem only to see Barbero summon an even bigger Tangle Golem.

Courtois found a Slith Ascendant and it started to get bigger as Barbero cast only a Shikari in his turn. A Den Guard came out and gratefully accepted a Longbow. Barbero had to cast Dragon Blood and pump his Transfixer to put it out of ping range.

With 6 mana and two creatures Courtois had options. He could attack and grow his Slith or he could start switching the bow and start machine gunning down Barbero's army of 2 toughness guys. He went for a more aggressive option, giving the Slith a Morningstar and flying in. The flier was rapidly on it's way to becoming unmanageable.

Barbero found only another ground-pounder, a Razor Golem, and used an Awe Strike on the Slith to buy some time.

Barbero thought about swinging back, but decided to summon a Wizard Replica instead. Even with the Dragon Blood the Slith was still too big and Barbero had to chump. Courtois flipped the Morningstar back onto the Den Guard to provide a sizeable defender on the ground.

Barbero thought about an allout attack and again changed his mind. It became apparent what he'd been trying to buy time for as he dropped an Altar of Shadows with the help of his two Cloudpost. Courtois looked like he might be in trouble. An attack took 5 more life off Barbero, but he was still on a reasonably healthy 12. Courtois could only summon an Auriok Bladewarden.

The next turn Barbero untapped and the creature-killing-machine was operational. Courtois gave the Morningstar to the Bladewarden and that pumped the Den Guard before giving the Morningstar back. Both the Ascendant and Den Guard charged in. The Slith fell victim to the Altar while Barbero's Shaman threw itself in the way of the Den Guard.

The next turn the Den Guard fell to the Altar and Courtois was left with just a Bladewarden. Top 8 was looking a long way away. He gave the Bladewarden a Longbow just to take a point of Barbero's life away. 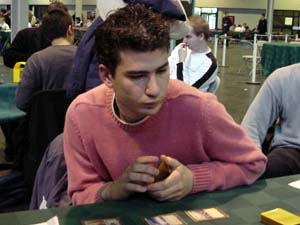 The Altar left Courtois with nothing and the mana was sunk into a Dragon Blood as Barbero charged with his team.

Courtois bought himself a turn with Turn the Tables. He managed to Deconstruct the Altar and play out a Arcbound Bruiser. He was still in a lot of trouble. Barbero tapped the Arcbound Bruiser with the Transfixer and then served for 7. The Pentavus that followed was plain overkill.