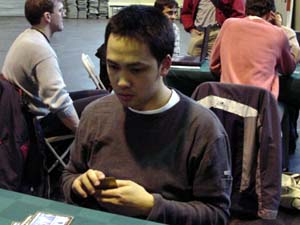 was born Dutch but grew up in Germany, and now lives in England. Adam is an Australian who's also moved to England - he's been here for a year now. Kamman needs one win in the next two rounds to make top-eight, while Adam must win this round

Kamman won the die roll and played first. He has a turn one Necrogen Spellbomb and a turn two Pyrite Spellbomb, with two Islands. Adam has two Forests and an Arcbound Stinger. Kamman made a Scale of Chiss-Gloria in Adam's end-step.

Kamman cycled the Necrogen Spellbomb to draw a card, and having no third land ended his turn. Adam nipped in for a cheeky one with the Stinger, and laid a third Forest for a Viridian Joiner.

Kamman's next draw step yielded a third Island, and he played a Spire Golem, which Adam promptly Shattered and swung in, dropping Kamman to 17. Adam made an Iron Myr and passed.

Kamman had a fourth Island and a Neurok Prodigy, as the Arcbound Stinger took him down to 16. Adam had seven mana available on his turn, and used six of it to make a Malachite Golem. Kamman answered with a Quicksilver Behemoth and swung in for 18 with the Spy, dropping Adam to 18. "And it's yours."

Adam untapped, drew, and surveyed the board. The Stinger went in while the Golem stayed at home, and Adam added a Silver Myr to his board, two cards left in hand. Kamman played a three mana Thoughtcast, a Talisman of Indulgence, and an Aether Spellbomb. Again Adam's Stinger went in, Adam laid another mountain, his 9th mana source, and played a second Malachite Golem. Kamman returned it to his hand with his Aether Spellbomb and untapped.

The Spy took Adam down to 14, and Kamman tapped out for Bosh. Adam sighed, and let out a nervous laugh. He untapped and looked to his deck for an answer. None forthcoming, he re-read Bosh and shook his head. Kamman took his seventh Stinging of the game, down to 13, and Adam made himself a fresh Viridian Joiner and replayed his Malachite Golem.

Kamman Spied again, and passed. Richard Stung again, played an Arcbound Bruiser, and passed. The Spy attacked, the Pyrite Spellbomb was sacrificed, and Kamman tossed Bosh at Adam's head - Adam was down to 0.

Adam played first, and Kaman mulliganed down to 6. Adam had a turn 1 Aether Spellbomb, a turn two Vulshok Gauntlets and a turn three Tel-Jilad Wolf, while Kamman had no plays until a turn three Psychic Membrane, leaving Adam's Wolf looking a bit sheepish. Adam made a turn four Arcbound Crusher - a creature of potentially monstrous proportions against Kamman's affinity deck, and passed. Kamman had no turn 4 play, and Adam made a Spikeshot Goblin on his turn and cycled the Aether Spellbomb. Adam left the Crusher at home, and Kamman made a Needlebug in his end-step. Kamman made no fourth land on his turn but made a Wizard Replica with one Island open. He passed without attacking. Adam was looking good with Gauntlets and Spikeshot Goblin on his side - Kamman would have to find an answer soon or face serious trouble! Adam made a Wizard Replica of his own for now, and sent in the 4/4 Crusher, which Kamman blocked with the Needlebug, taking 2 trample. Adam ended his turn.

A dejected Kamman could only offer a Quicksilver Behemoth on his turn - not inconsiderable, but only a point of toughness larger than the Crusher, and vulnerable to a Gauntleted Goblin. Predictably, Adam used the Goblin to assassinate the Behemoth, and swung in with the Crusher. Again Kamman took two trample over the Needlebug, and took his turn. Spire Golem made the Crusher a 5/5, and Adam made his sixth land! Already those Gauntlets were looking absolutely monstrous, and as soon as he drew one more land he had a free Shrapnel Blast's worth of damage every turn!

Adam elected to put the Gauntlets to the Wizard and attack for 5 in the sky, and make a Krark-Clan Grunt while Kamman was tapped out. Kamman, sounding more dejected than ever, made a Myr Enforcer and passed over as Adam put the sixth counter on his Arcbound Crusher! The board looked hopeless.

Adam put the Gauntlets on the Goblin. The Crusher dealt Kamman four trample over the Needlebug, and passed. Kamman had no plays, and Adam shot down his Spire Golem with the Goblin in Kamman's end step. He untapped, made a Talon of pain and attacked. Membrane and Needlebug ganged up on the Crusher to keep Kamman from dropping lower than 9, but it really didn't matter. Kamman scooped on his next turn.

Kamman elected to play first, and the players wished each other luck. Both players kept their seven card hands, and play commenced. Adam had a turn one Lifespark Spellbomb, Kamman a turn two Arcbound Stinger, and Adam a Silver Myr. Kamman attacked for one and made a turn three Neurok Prodigy, a clock of note. Adam had no land on his third turn, and used his Myr to help make a Viridian Joiner to compensate. Kamman had no turn four play - perhaps he was holding a Needlebug again? Adam drew his third land and made a Fangren Hunter on his turn, and true enough, Kamman made a Needlebug in his end step.

Kamman dropped Adam to 13 with the Spy and the Stinger, and made a Pyrite Spellbomb. The clock stood at four turns. Adam made Vulshok Gauntlets, Tel-Jilad Wolf, and passed the turn without attacking.

Kamman dropped Adam to ten, and made a Quicksilver Behemoth. Adam laughed - he was in trouble. Adam's made another Viridian Joiner, and an Arcbound Stinger of his own. 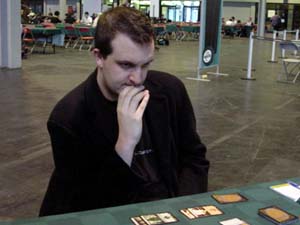 Kamman played a two-mana Thoughtcast, and elected to save the Pyrite Spellbomb, just sending in the Spy, which took Adam to eight. Adam played a Tangle Golem on his turn, but Kamman had an Annul ready. Kamman attacked again, the Stinger too this time. Adam engaged in the skies, but Kamman played Scale of Chiss-Gloria to save his Stinger. Adam was at six, as Kamman played a Myr Enforcer and passed the turn.

Adam thought for some considerable time, and cycled his Spellbomb in Kamman's end step. He untapped, but was still stuck on only three land. Clearly frustrated, he desperately searched for options. Shaking his head, he found none, and extended the hand. Adam was stuck with a potentially fatal Nemesis Mask in his hand, but simply never had enough land to extend enough to win with it. Bitterly screwed, but he took it like a Gentleman.