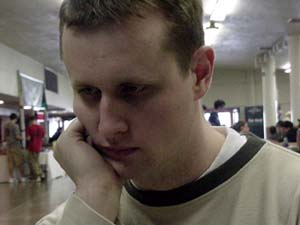 Neither player was terribly happy about their deck. Bob had tried to force black-red in the first pack by taking a Pyrite Spellbomb over cards like Fangren Hunter and Soul Nova. He was confident that the player to his right was in red-white and cutting it off hard. After a couple of picks he caught on and switched to a blue-white deck that was splashing red for a Spikeshot Goblin.

Steven Wolfman is a Canadian player who was a member of 2020. His team nearly won Pro Tour Boston the first year the event was moved to Boston and they followed up with a finals appearance at the next Masters event. Bob Maher needs no introduction.

Steven was wishy-washy about the quality of his deck, "Not bad but not great. I passed a lot of black that I probably should have been playing." Steven's deck was green-white with a pair of splashed red bombs in Fireball and Bosh, Iron Golem. He had a squadron of Tangle Golems and Heartseeker to boot.

Bob sauntered over to the feature match area and the two players began chatted while they shuffled. "Do you like your deck?" Bob probed.

The always-glum Wolfman was frank, "Its okay I'm not really impressed with it."

"Same," conceded Bob "I tried to force something but I am certain that the guy on my right was doing the same exact thing." Bob and Steve were the only players at their table at 10-2-1 and thus the only two with a shot at making the Top 8 if they can run the table--something only one of them could do. "Everyone else has three losses--but nobody is going to concede to us."

Bob decided to keep his hand while Wolfman fished for six new ones he could work with. He kept the next six and had the first play of the game with Neurok Hoversail. Bob cast his much debated Darksteel Ingot and used it to power out a Spikeshot Goblin on the next turn. Wolfman had summoned a Tel-Jilad Chosen on the turn in between.

He beat in for two and played a Heartseeker. Bob killed the Chosen on his own turn and then Fabricated for Bonesplitter and played it. Wolfman was sitting on Tangle Golem and Fangren Hunter but did not have enough mana or the correct ratio of Forests to Plains to cast either. He played a Copper Myr and when Bob tried to Spikeshot it on his next turn Wolfman saved it with Predator's Strike.

Bob was suspicious and used Domineer to steal it and Wolfman had no play on the next turn. Bob equipped the Myr and attacked for three. He played an Arcbound Crusher and attempted to move the Splitter over to the Goblin. Wolfman responded with Blinding Beam and Bob pinged him for one in response.

Wolfman still had no play and Bob cast an Auriok Siege-Sled while he waited for his guys to come back online. Steven drew a Talisman and passed the turn in anticipation of untapping to the tune of five mana. Bob cast Arcbound Stinger and Spire Golem and his Crusher swelled to a 4/4. Dave attacked with everyone available and Wolfman conceded.

Wolfman sided out one Plains for a Forest while Bob pondered his Tower of Eons. While Bob was thinking Wolfman also swapped out Neurok Hoversail for Whispersilk Cloak. Bob decided to leave his deck without any changes, "We'll see how Game 2 goes…"

Wolfman stared at his hand and Bob stared at Wolfman. This went on for at least one full minute until finally Wolfman declared, "I can't keep this." He was holding two Forests, a pair of Tangle Golems and no early drops.

Bob commented, "Even if you had kept that I was sure that your look meant you were thinking, "I could keep this if I was on the draw."

Bob played a second Island and Wolfman seemed nervous about Domineer but Bob had Fireshrieker for the Cub and was able to crack for six.

Wolfman cracked back for five and added a Fangren Hunter to his mounting army. Bob was nervous about three cards still sitting in Wolfman's hand but decided to go for it, "We'll see what you've got to deal with this." He Fabricated for Bonesplitter and took Wolfman down to three with his Cub. After combat he played a Seat of the Synod and made a one-mana Somber Hoverguard.

Wolfman attacked back for nine and used Blinding Beam to lock down Bob's squad. "That's trouble."

Bob was at six and Wolfman at three. Bob had a second Cub and moved the Fireshrieker into its waiting arms. Wolfman attacked with both and Bob traded with the Golem and fell to two from the Hunter--sighing in relief that no growth spell was cast. Wolfman sent the turn back with all of his mana open.

His team untapped and when Bob declared his attack step--without bothering to equip anything--Wolfman shook his hand in defeat.

After the match Bob and Steve discussed Game 2 and Bob realized that the Fangren Hunter that was in play was from the second pack that he opened. "I should have recognized that the stamp was from my pack it would have made my decisions much easier--I was worried that you had the Soul Nova. I should have known that you didn't. I don't know if I would have played it differently but Soul Nova wouldn't have been a concern." 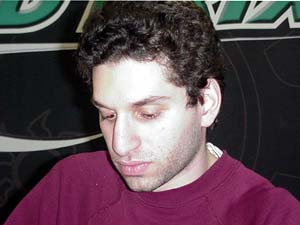 When asked about whether or not he was able to glean anything from the Pro Tour and Grand Prix stamps on cards he nodded. "It is relevant about once a draft. I worked over Jamie Parke with it in the last draft."
Apparently Jamie had a Spikeshot in play and cast a Bonesplitter with the same draft stamp. Bob was able to determine from Jamie that the Spikeshot was a first pick and thus he knew that the Bonesplitter was as well. Jamie tried to pretend it was passed to him but Bob knew both of Jamie's first picks.

Jamie was playing red-white and as a result Bob was close to certain that his opponent could not have a Grab the Reins or Solar Tide. With that knowledge he felt comfortable committing creatures to the board and played without fear of either of the two cards. It is just one more reason why Bob Maher is better than the rest of us.