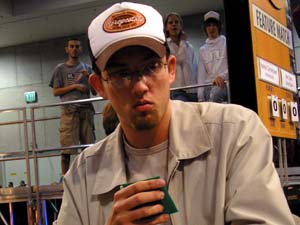 might have heard people mention Mark Herberholz. A player from Ann Arbor, Herberholz was weaned on the skills of Pat Chapin and Eric "Danger" Taylor. This is definitely his breakout performance, as he's sitting pretty at 11-2. His opponent Masashi Oiso hasn't slowed down since picking up the Rookie of the Year title last season. Herberholz has every reason to be nervous.

"I'd also like to say that RIW Hobbies made it possible for me to be here." - Mark Herberholz

Going first Oiso mulliganed and played out three lands while Herberholz busted out Silver Myr and Arcbound Hybrid. He still had no action on turn four. Herberholz hit for five and dropped Synod Sanctum and then Somber Hoverguard for one mana. Oiso evened the scores with a bought-back Pulse of the Forge, then untapped and played his first creature, a Clockwork Vorrac.

Herberholz could barely wait to finish untapping in order to slam down Domineer. He hit for six more and gave it back to Oiso, who had nothing.

Consume Spirit sent the Hoverguard into the Sanctum, and Oiso waited on his Shatter, so the Domineer got to join it. Rather than face that kind of inevitability, he went to Game 2. 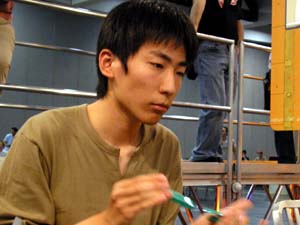 Oiso mulliganed again, and kept a one-lander on the play. When fortune frowned on him, he was stuck staring at a swamp while Herberholdz dropped a bunch of men onto the table. Shaking his head, Oiso swept up his cards.