Round 13 Feature Match: An American Idol

There, I said it.

There's just something about him that is refreshing. First, he's a good player. During the Japanese events I covered last year, he constantly amazed me with his excellent play and was very exuberant about playing the game. He's also on my short list for Japanese players to watch out for and one of the common responses for most underrated Japanese player.

He was absolutely giddy as he approached the table for his Feature Match. The first to arrive at the table, he smiled and told me, "I am happy! I get to play against Jon Finkel!" This is not a statement you hear very often. Or, like ever. I laughed a little and asked him why? "Because I have only ever seen him in magazines! Now I get to play him, and right over there is Kai, too," he said, indicating the Feature Match next door between Kai Budde and Tomek Pedrakowski. He was all smiles as Finkel approached the table, eager to introduce himself and shake Finkel's hand. Finkel smiled and the two of them sat down and began to chat about how the draft had gone for them. 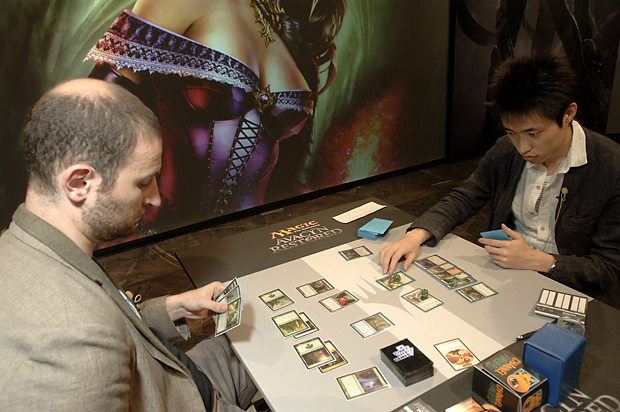 Naoki Shimizu is one of the few players in this tournament hall that is excited to play against Jon Finkel.

As soon as the first card was drawn, however, Shimizu's smile faded and he entered business mode. Sure, he may have been ecstatic to be sitting across the table from an idol, and sure, his opponent may be a Magic robot sent back from the future to destroy us all, but Shimizu had a job to do, and it was game time.

Shimizu was forced to mulligan his opening hand, relying on his six card follow-up. Finkel was on the play, and he led with an Avacyn's Pilgrim that was matched by Shimizu. Finkel followed up his Pilgrim with a Geist of Saint Traft off of a Cavern of Souls set to Spirits. Shimizu had nothing. When Finkel attacked on the following turn, Shimizu simply took the damage, falling to 13. He once again played nothing but a land before passing the turn, and this game looked to soon be over. When Finkel used Increasing Savagery to give the Saint a bit of a rough edge, Shimizu seemed even more stuck.

Shimizu is thoughtful by nature, though, and not one to get rattled easily. He calmly stuck his Pilgrim in front of the rampaging clergyman and used a Restoration Angel to keep it alive. He dropped to 9 from Saint Traft's Angel. After untapping, Shimizu made a Wolfir Silverheart, forming a Wolfir/Angel tag team. This slowed Finkel down a bit. Dungeon Geists made things a bit more interesting, locking down the Restoration Angel, but it still didn't allow Finkel through. In fact, it didn't have a lasting impact at all as Shimizu used a Brimstone Volley to finish it off after attacking Finkel for 8 with his Silverheart. Life totals stood 12-9 in favor of Finkel, but the Hall of Famer didn't have much other than his giant Geist on the board. He attacked with it on the next turn, but Shimizu simply threw his Pilgrim in the way. 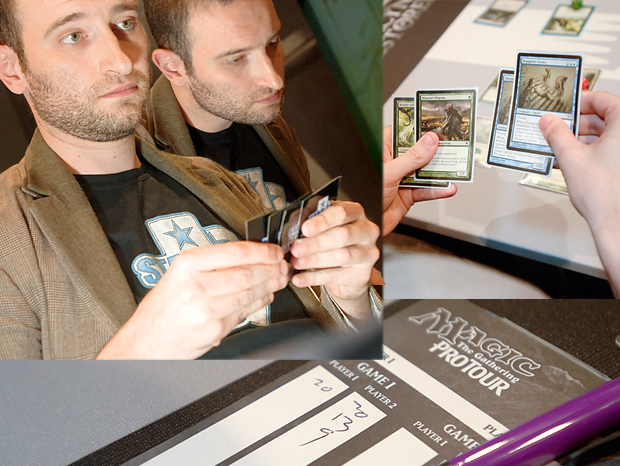 Finkel's Geists can really put someone under pressure, as Shimizu is learning.

Finkel's Angel dropped Shimizu to 5 during the attack, but it was the Dungeon Geists afterward that really put things back into Finkel's court. Locking down the Angel, the Geists prevented Shimizu from stopping the flying damage. Without another Restoration Angel, Shimizu found himself in a position he couldn't escape, and he dropped the first game to Finkel despite an excellent attempt at recovering from Finkel's speedy draw.

Both players kept their opening draws for the second game of the match. Shimizu's deck provided him no first-turn play, while Finkel had the traditional Avacyn Pilgrim. Shimizu wasn't without some acceleration of his own, though, and a Scorned Villager came down on the second turn, quickly transforming as Shimizu skipped his next turn. Unfortunately for him, Finkel's draw unfolded much as his previous one had. Geist of Saint Traft came down on Finkel's second turn, and it got suited up for a Spectral Flight on the turn after. Shimizu quickly found himself at 12 and facing down a quick death. 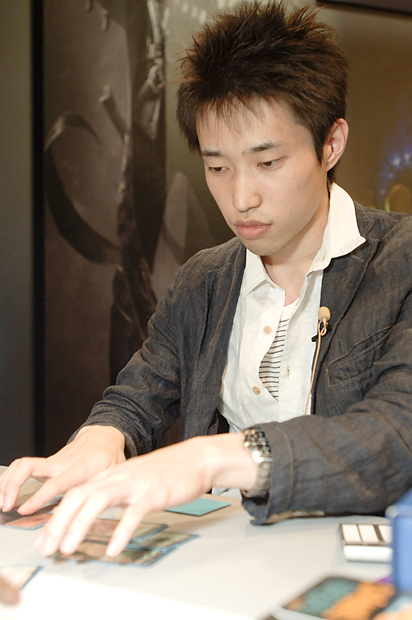 Shimizu attempts to fight back against Finkel's speedy start.

His crawl out of the hole began with a Restoration Angel, which he chose not to flicker with. Unfortunately, this was met with a Silent Departure, which Finkel clearly intended to flash back on the next turn. Shimizu replayed his Angel, but dropped to 4. Finkel added a Strangleroot Geist to his team and passed the turn. Shimizu's Werewolf flipped back to Human, and he spent the turn doing nothing to flip it back. As expected, Finkel aimed his Departure at the Angel, and that was that. Business time was over, baby. For Shimizu's sake, at least he got to meet his idol. When they next meet, as I'm sure they will, he can take his next crack at defeating a legend.