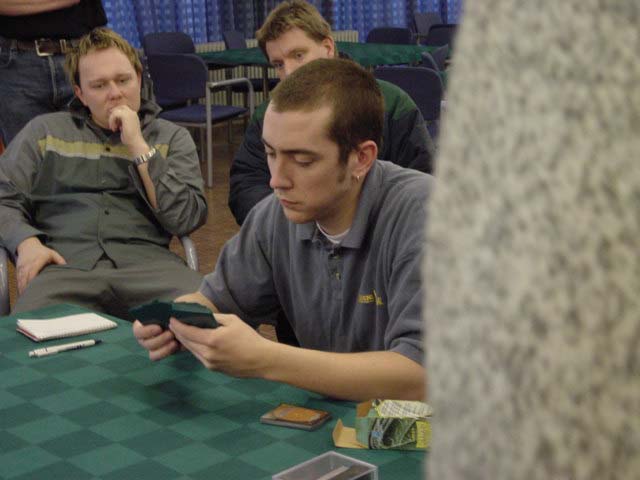 The penultimate round and David Price from the states faced off against the Frenchman Antoine Ruel. The match was of more importance to the American as Ruel could afford to lose and still make top 8. This was lucky for him as they'd sat next to each other in the draft and had both chosen to draft red/black. Crucially Price had been feeding Ruel for two of the boosters and consequentially had the pick of the better cards, including a third pick Yawgmoth's Agenda.

The difference in quality between the two decks soon became apparent as Price did nothing until turn four and then unleashed an Urborg Shambler. Ruel's Nightscape Apprentice bit the dust and his Hooded Kavu cowered in the corner. Price followed that with Ancient Kavu and Firescreamer in successive turns. Reckless Spite cleared the way for the fatties to smash through.

Game two looked like a replay. Turn four, out slithered the Shambler and into the bin went the Nightscape Apprentice. Another Reckless Spite and into the bin went two more of Ruel's creatures. Ruel summoned a Firescreamer and Price had so much removal he used a Soul Burn to clear the 1/1 out of the way and added a Firebrand Ranger to the attack. Ruel thought carefully about which creature he should Recover, decided on the Emissary and weakened the Shambler with an Exotic Curse. It wasn't enough as Price drew the second of three Soul Burns he has in his deck.