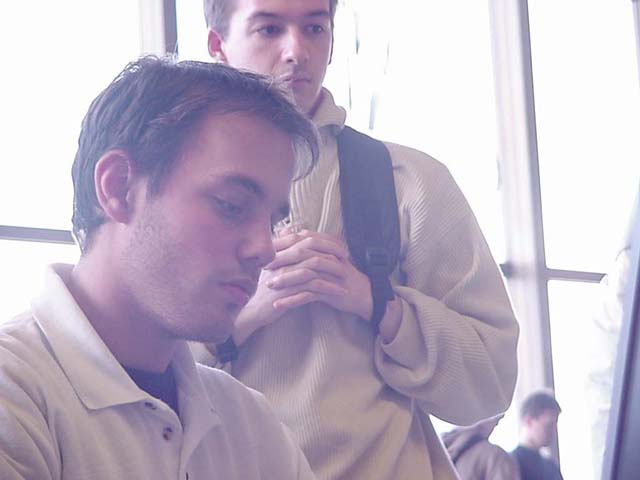 Trey started the game with Ravenous Rats while Antoine cast a Samite Healer. Trey followed up by playing a Phyrexian Slayer and attacking with both creatures next turn. Antoine used the Healer's ability to kill the Rats. Trey wanted to cast a Thunderscape Battlemage but it got Excluded. Antoine then played an Andradite Leech, which left Trey thinking. After some thought Trey decided to play a Nightscape Battlemage with blue kicker, thereby returning the Leech and the Healer to Ruel's hand.

Trey cast a Power Armor, when a Judge noticed that the Nightscape Battlemage that had been played last turn had an Andradite Leech as a target, which isn't legal. This surprised both players, as they both did not remember the exact wording of the Mage.

Antoine tried to get back into the game by casting a regenerator that could block the enraged Battlemage. Trey then played a Thornscape Battlemage with black kicker. Next turn he attacked with both his creatures. Antoine blocked the red Mage with the Leech and the enraged Mage with the Nightscape Familiar. He then made the Leech a 5/5 creature. Antoine played an Artic Merfolk and returned his Nightscape Battlemage to his hand as a part of the kicker cost. He then cast it again and returned the Hooded Kavu back to Trey's hand. Trey just recast it and attacked with it next turn giving the remaining one damage to the Frenchman. 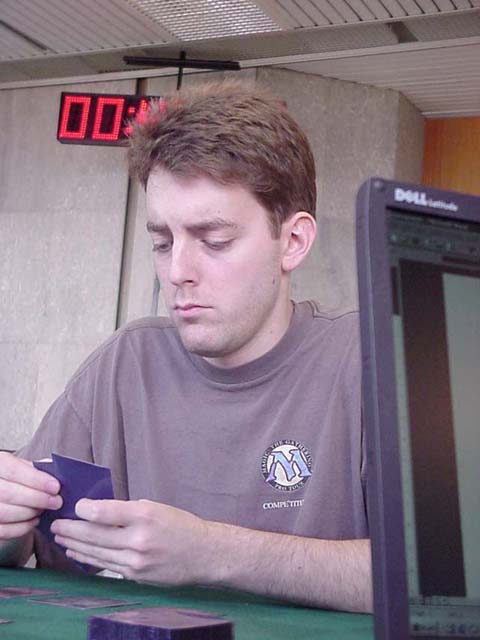 Ruel started better this game with a second turn Nightscape Familiar followed closely by a Stormscape Apprentice and an Artic Merfolk. Trey just played a Hooded Kavu and ended his turn. The Frenchman then played the Sunscape and the Nightscape Familiar. Trey tried to attack with the Slayer he had just cast but Antoine tapped it as Trey stepped into his attack phase. Both players kept exchanging damage.

The tension rose and confusion started taking over. Before anything dramatic could happen, the round ended with Trey being ahead by one.