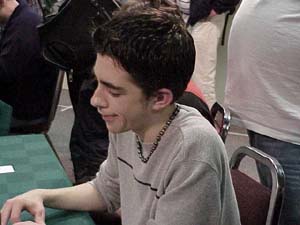 This match paired two of the youngest players in the room together for some exciting Magic action. Ben Stoll, from Louisville Kentucky, is 15 years old, while Ben Stark, from Fort Lauderdale, FL, is 17. The two are playing for a spot in the top eight with the winner being guaranteed a spot, and the loser needing good tiebreakers and a load of help from other players.

Ben Stoll is a former Kentucky State Champion, and was a member of the Pro Tour New York team, The Right Brothers. (Also composed of Kentucky Players Jared Burt and Seth Stair.) This is Ben's best performance at a premiere level event (Pro Tour New York was unkind to The Right Brothers; they finished next to last), but he has performed very well at several Pro Tour Qualifiers, and has earned several Top 8 finishes.

Ben Stark is no slouch at this game either. Playtesting with Florida's finest and Geddes Cooper, Ben was able to make top 32 at Grand Prix New Orleans and finished 67th at Grand Prix Boston.

Ben Stark was playing a very weird green deck. He decided to splash Red and White along with his green spells, but ended up with a sub optimal deck. Featuring three Nomadic Elves and Fertile Ground, it looked like he attempted the popular five-color strategy. However, this attempt saw him sideboard the Pro Color Acolytes, and main deck Terminate and three Benalish Lancers.

Stark wins the roll, opted to play first and after both players drew, it was time to start the match.

Both players started off this game fast and furious. Ben Stark started his assault with the mana washing Nomadic Elf, while Ben Stoll answered with the protection from Green Vodalian Zombie. Ben Stark tried to stop a creature stall with the Benalish Lancer, but Ben Stoll had an answer in the form of an Exotic Curse.

The game play stalled for a bit at this point. With all of Ben Stark's creatures green, Ben Stoll had an easy time with his Zombie. Finally, Reckless Spite, targeting both of Stark's Nomadic Elves ends the stall.

Ben Stoll took control of that game soon after that point. He played a Thunderscape Battlemage with Black Kicker, and Ben Stark had to look off the top of his deck for answers. 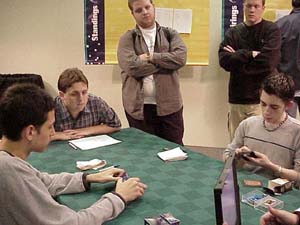 Stark kept missing out on chances to return to the game. Peeling land after land from the top of his deck, he was able to cast a Kavu Titan, in hopes of it hanging around long enough to be a blocker. However, Ben Stoll kept rolling with the answers, and an Urborg Emissary with kicker allows him to attack Stark to critical life. Peeling yet another land, Stark recasts the Titan. During Stark's end phase, the Titan was recoiled, and Stoll came out of game one with a victory.

Ben Stoll was able to start off the game with a Vodalian Zombie. On Stark's next turn, he cast a Crimson Acolyte (Which was side boarded in against Stoll.) Followed by a Nomadic Elf. Stoll however, kept up with Stark and his creatures. Peeling answer after answer, Stoll was able to curse away the Acolyte and block the Elf. Stark kept the creatures coming however, and soon his army was overwhelming Stoll.

Ben Stark finally swung with his entire army and Stoll in a desperation move, Reckless Spited two critters away. This was Stoll's last act, and he finally ran out of answers by Stark's final attack phase. 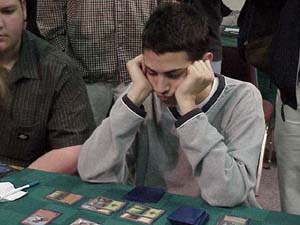 Stoll opted to draw; Stark started off some near mint bashings with a Crimson Acolyte. Stoll had the answer though, and hit it with an Exotic Curse. Stoll had some fresh beats in his hand as well, as the Vodalian Zombie hit play in his next turn. At this point Ben Stark was losing control of the game and seemed mana flooded. In desperation, Stark cast a Titan without kicker, and then returned it to play a Horned Kavu. It was here that the game changed, and went further downhill for Stark. Stoll was winning the creature race, and all of his dorks were efficient. They either had a protection, or they had a come into play ability. This was further evident in the fact of Stoll's next creature, Marsh Crocodile. He played it, returned the Urborg Emissary, and bounced away a Kicked up Kavu Titan.

Ben Stoll kept it up with the creatures, and after a handful of attack phases, Ben Stark set decimated, and Ben Stoll had enough points to make the Top 8!