Round 13 Feature Match: BFF, but Somebody's Gotta Go Down

and close friends. Playing for Top 8. Perhaps it could be worse, although "bittersweet" suddenly has no equal at this point, at least for these gutsy competitors. Both L.A.-area players come in at 9-3, and while a loss might not mean the dreams of Sunday are over, it certainly wouldn't help matters.

One could feel the frustration between the players, although they've been there and done that and know that it's better than them both being 3-9. With them apples aside, Paul and Sam, who have tested and teamed together ad nauseum, let the good times roll. 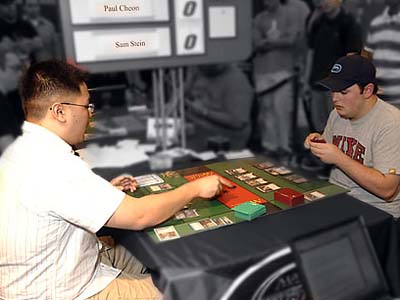 Paul Choen and Sam Stein, close friends, face the prospect of knocking each other out of contention.

Sam started with a mulligan on the draw, but dropped a turn-one Isamaru. Paul accelerated with Dimir Signet, while on the other side of the table, Bob joined the lovable little hound. Compulsive Research added ammunition to Paul's grip, and already way ahead on cards, he now had all three of his colors.

Sam sent in the team, then cast Castigate and saw:

He took the Wrath and shipped it over - Wish me luck, Westley, I'll most likely kill you in the morning. Paul dropped Hussar, and after a grueling decision, added another how-do-I-possibly-lose-this-game card to his rather large grip.

With a 1/3 in the way, Bob and his faithful puppy stayed home and played ball. After Hand of Honor met Remand, the Stein team caught another Bob and sent it over.

Kokusho hit like a ton of bricks, and with double-Bob action filling his hand and sucking his life away, Sam needed something quick fast in a hurry. Ghost Council fit the bill, and while it wasn't about to hang with Kokusho, it would have to do until a miracle that white-black doesn't have came along.

After taking 5 on the chin and longing for Death Grasp or Swords to Plowshares, Sam sacced a Bob to avoid, um, dying, and the Council met Mortify, which elicited a scoop.

Sam drew his seven, sighed "This is going quite well," and then shipped it back. He kept his six, Paul kept his seven, and it's off to the races.

Hand of Honor hit on turn two for Sam, and then a turn three faux pas Persecute was "put into play" when he meant to cast Phyrexian Arena. Oops, and is there anything you can do, with this inside look, Paul? 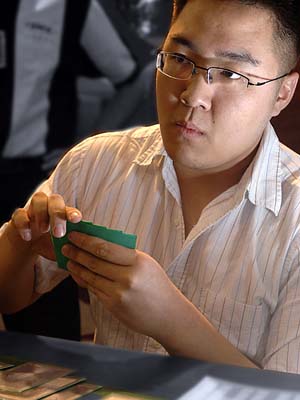 Hmm… The Force is strong with this one.

Descendant of Kiyomaro hit on Paul's side, perhaps lessening the effect of the bet-yer-ass turn-four Persecute.

Indeed it came, although Sam neglected to say "It's coming!" during upkeep. He named "black" and nabbed a pair of Angel of Despair and Kokusho, leaving Wrath and Meloku in the grip. It was obviously an excellent "Cute, but hardly reassuring under the circumstances." However, Sam had Arena, and card advantage has ridden more than one pony to the finish line and put him to bed wet.

They traded beats for a couple of turns until Sam dropped Ghost Council, assuming he was free from potential legendary time-stamp messes that no longer exist anyway.

After Mortify killed Meloku and Castigate took Paul's Wrath, things started to look up for the man with Arena in play, as they often do when your opponent is living off the top of his deck and you're not. When Eight-Point-Five Tails joined in the fun, Paul drew one final card that didn't read "Bury Target Player," and scooped up his cards.

Seven was good for both players, and while the tension was high, the mood was generally relaxed, take-it-as-it-comes, we'll always have Paris.

A pair of Remands kept Bob from tabling, and not satisfied with two Time Walks, Paul added Compulsive Research and fortified his supply of "I win" cards.

One Bob met Paul's Mortify, but another hit and stuck, giving Sam a chance to recoup some well-needed card economy. Another Research gave Paul a second Mortify for the 2/1 know-it-all, so please ignore the previous sentence.

Castigate showed Paul's grip to be two textless Zombify, Wrath, and Condemn, with the pseudo-Swords hitting the RFG pile.

Ten minutes into the game, and it was unclear who had the advantage, though Sam's grip was twice as large as Paul's. Again, Dark Confidant hit, and his best buddy Umezawa's Jitte came down beside. 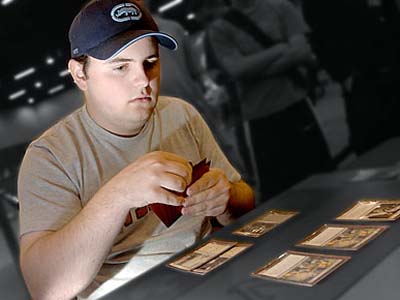 Stein consults with his friends Bob and Bob.

Paul Compulsed another Research and cast Wrath, with two added bonuses of keeping counters off Jitte and extra cards from Sam's hand. Hand of Honor and Arena joined Sam next turn, which left Paul in the unenviable position of having to answer virtually the same noise again.

He did, and Yosei is his name-o.

"Persecute: Black" nabbed the pair of Zombify, which kept the potential abuse that is Yosei on a rope to a bare minimum. Paul Mortified Arena and sent in Yosei, then Wrath cleared the board and tapped down Sam.

Zombify off the top grabbed Yosei and insert your soap-on-a-rope joke here. Sam came back with 8.5, another Arena and a four-point Shoal back at Paul's melon, which pissed off Angel of Despair enough to blow up the best legendary Foxx since Redd.

Facing down 10 points of unblockable damage, Sam cast Ghost Council and Mortified the Angel, so close to getting out of this mess he could feel it. However, another Angel came from the top and even before she could flex more muscle than Barry Bonds at a steroid symposium (allegedly), Sam extended the hand.

Paul Cheon won 2-1 and kept his Top 8 aspirations alive and well by hitting the magical 10-wins plateau, while Sam Stein had to hope that a win next round and some good fortune can shine down on him.