Gotta love it when this kind of stuff happens. In one corner is Chris Benafel - PT Bad Boy, ruthless competitor, big-time money winner. In the other corner is Liz Lempicki - amateur, friendly and flirtatious, and, oh... Benafel's girlfriend. 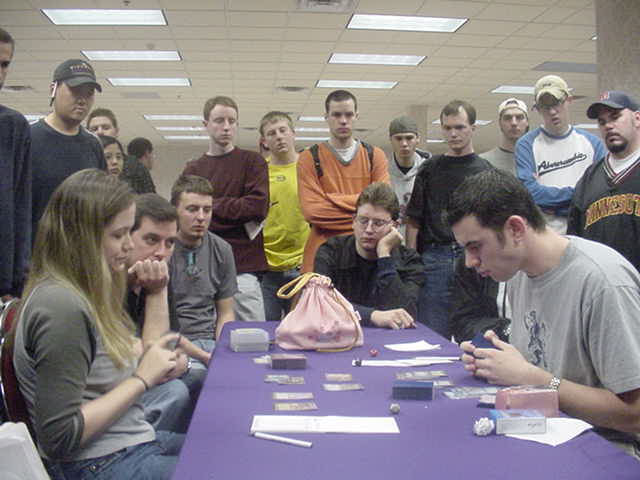 Both are in prime position to make Top 8 if they win out. Neither of them really wanted to play this match, so Liz went over to the scoreboard, ripped down the standings, and came back to the table. The pair spent almost ten minutes deliberating what good a draw would do them, or if one of them should concede to the other. Benafel stands to benefit from a high finish because the PT points translate into Masters money. Liz stands to benefit by becoming qualified and picking up a phat Amateur prize. They can't come to a good decision, however, and decide to play it out with the agreement that the match won't end in a draw no matter what.

Liz is playing a version of Mike Turian's G/U/r deck, and Chris is playing Trenches.

Liz started off with a Birds of Paradise and a Call of the Herd, commenting, "You're not going to offer me a split NOW, are you?"

"No," Chris replied, "You might have gotten a good start, but my hand is insane. I'll be all right."

Lies. Liz added a Mongrel to the table. All Benafel had was Absorbs and Sycopates, and the opportunity never came up to cast them. Chris did manage to Fire two birds, but that was the only spell he ever cast.

I could probably spend another four pages going on about how Benafel broke out of the Static Orb/Opposition lock in game 2 with Disenchants, and eventually won with Goblin Soldiers, but that's not what this match was about. Needless to say, as time ran down, they shuffled up for game 3... 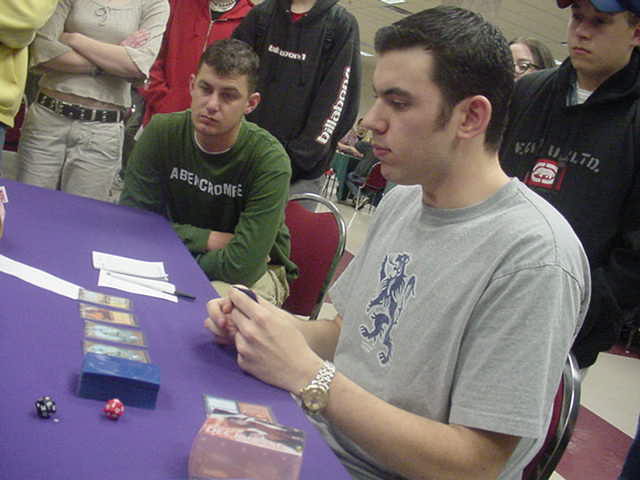 Liz came out quick with two Wild Mongrels in the final game, and Chris took the beats down to 10 life. He Repulsed and the counterspelled one of them, and gained three life back from Absorb when Liz tried a Merfolk Looter.

Liz's hand was getting empty, so when Chris dropped a sided-in Flametongue Kavu and killed the other Mongrel, there was little Liz could do. She dropped a Static Orb to gum up the game, and the clock dipped below 2 minutes. All that time spent going over the standings was going to come back and bite them.

Benafel kept up the posturing as time ran down, not playing to try and win, but playing to have the upper hand when the judge pulled the plug on the match. As the extra turns ended, Benafel simply said, "I would win this game if it finished. In case that means anything to you."

Chris reached over and started filling out the slip. 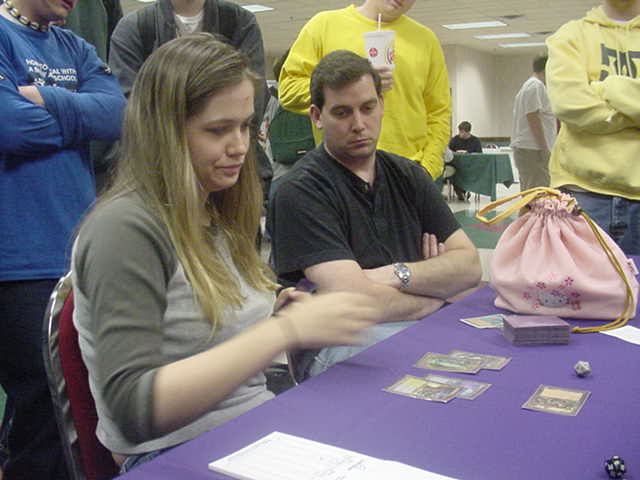 Head Judge James Lee came over and said, "Fill out the slip, please, you have 15 seconds." Benafel picked up his pen and hesitated. Lee prodded him, "Well?"

Liz, frustrated, grabbed the slip and filled it out "2-1 Benafel" and signed it. "Ok," said Lee.

"Nope," replied Benafel, grabbing the slip back. "She made a mistake." He changed it to "2-1 Lempicki," signed his name, and that was that.

Benafel is now eliminated from Top 8 contention. Liz needs to win round 14 to have a chance.