The final round of the Swiss rounds featured Scott Johns with a 9-0-3 record vs. Chris Demaci's 9-2-1 record. If Demaci wins, he makes the top 8 so the pressure is on. Johns has been cruising all day, but a loss might squeak him out of the top 8 even with his amazing tiebreakers. Demaci is playing a 4 color (w/u/r/g) control deck while Johns is playing a Tradewind Survival deck. 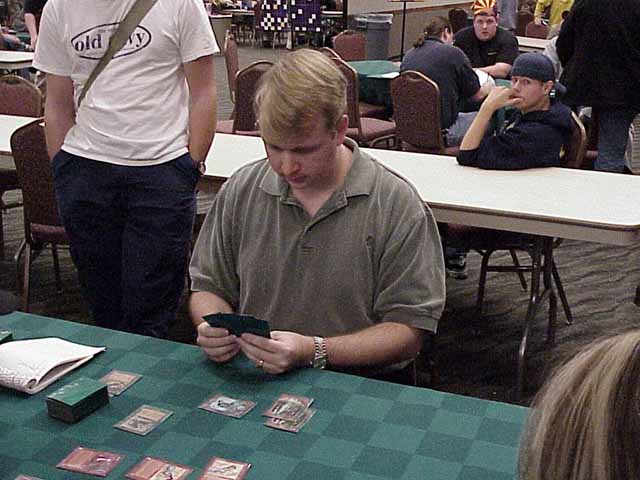 Demaci and Johns laid a few lands during the first 3 turns, but Demaci proceeded to miss his next 6 land drops and only dropped a Seal of Cleansing as his only other permanent. However, Johns couldn't capitalize on the situation, instead casting two Land Grants and a Wall of Roots. An attempt to cast a Tradewind Rider from Johns was rebuffed with a Pyroblast from Demaci. Johns answered right back with a Mana Leak, however, Demaci has a Mana Leak as well.

Demaci finally started hitting some lands laying a Flood Plain and a Volcanic Island in his next two turns. Johns' second attempt at casting a Tradewind Rider was again Pyroblasted, but Johns is ready this time with a Counterspell. But Demaci had a crafty plan up his sleeve, untapping and casting Wrath of God. Johns attempted to Counterspell, but Demaci had a Force of Will ready.

Demaci dropped another Seal of Cleansing and laid a few more lands, while Scott simply passed the next couple of turns. Johns laid a Survival of the Fittest with the intent on using it at least once before it got hit by one of the two Seal of Cleansings sitting on the board. As expected, Demaci used a Seal on the Survival, and Johns did get to use once to go get a Morphling.

Johns attempted to cast the Morphling which Demaci Forbid without buyback. Johns alternatively casted Force of Will pitching Brainstorm, which was in turn Counterspelled by Demaci. Demaci then put down a Faerie Conclave. Johns could only muster up a Quirion Ranger for offense and futilely drew nothing but lands as Demaci rode his Faerie Conclave backed up by his Counterspells to a game 1 win. 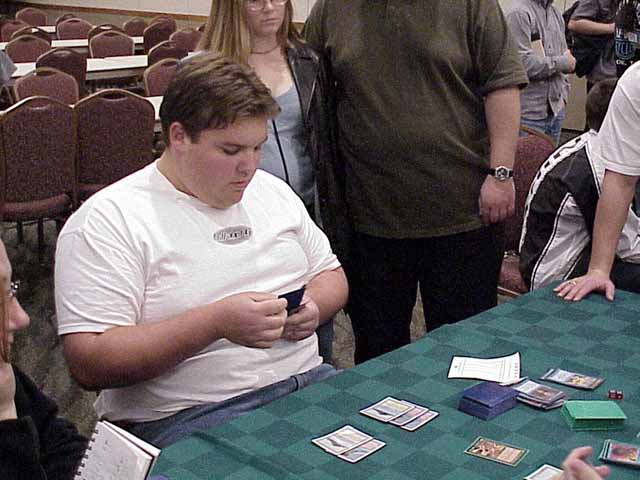 Johns started out Game 2 with a little offense this time, dropping a 2nd turn Quirion Ranger. Demaci fared better as well dropping land after land. Johns though, didn't drop any other creatures but two Birds of Paradise for the next 7 turns. However, it looked like the Ranger would be dangerous after plinking Demaci for over 7 points of damage. That all stopped when Demaci played a Treetop Village.

Trying to get back into the game, Johns tried to cast a Tradewind Rider. Demaci's Swords to Plowshares removed that creature from the game during John's end step. Next turn, Johns attempted to cast a Back to Basics, which would effectively lock up all of Demaci's non basic lands. Demaci cast Annul on the Back to Basics which Johns stopped with a Counterspell. Demaci tried to Annul the Back to Basics once again which was successful. Johns seemed flustered as all he had were Birds of Paradise, a lot of Land, and one lone Quirion Ranger.

Demaci then proceeded to take control of the game. He attacked with the Treetop Village every turn stopping every so often to win counterwars over Scott's attempt to cast Morphling, Survival of the Fittest, and a Tradewind Rider. Scott was finally able to kill Demaci's Treetop Village by gang blocking it with a Uktabi Orangutan and his second turn Quiron Ranger, but by then it was too late. At 3 life and with no time left on the clock, Scott conceded defeat.