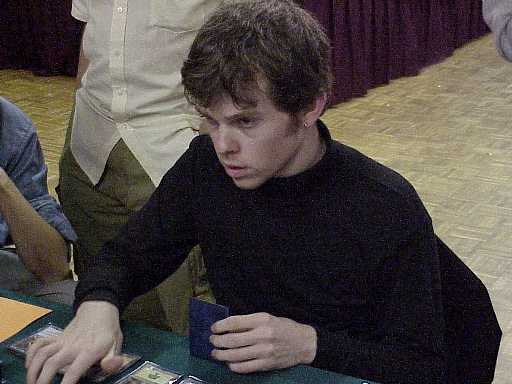 Two of professional Magic's slowest players, Scott Johns and Dan Clegg faced off in a match to determine who would go on to play in the Top 8. Scott Johns is on a hot streak after his team won Pro Tour New York just a few weeks ago, causing many to wonder if he has returned to his old form from the early days of the Pro Tour. Dan Clegg is a Pro Tour regular who seems to have stepped up his game recently. His team also did well in the team tournament, losing in the semifinals, and he has done well enough in the last season to qualify for the Chicago Masters series tournament. Both players had two draws already due to unfinished matches, and another draw would eliminate them both.

Dan was playing a blue, white and green deck with the usual assortment of flyers and tappers. Scott drafted a mostly blue and black deck with a splash of red, which is a very popular draft choice among the top players due to the large amount of removal and bounce.

In the first game, Clegg played first and dropped a creature on each of the first four turns, while Johns had a slower draw. Johns was forced to trade his first creature, a Tower Drake, for one of Clegg's lesser creatures in order to slow down the assault. However, he failed to draw another creature to play on turn four and had to Recoil Dan's Prison Barricade which was promptly replayed. On the next turn Scott was able to play an Urborg Emissary with kicker, buying necessary time by returning the Barricade yet again. Scott was then able to Probe with kicker, which emptied Dan's hand while exchanging Johns' two lands for useful spells. This seemed to turn the game in Scott's favor, as he had five good spells in hand while Dan played nothing on his next turn. However, when Johns tried to remove Clegg's Stormscape Apprentice the next turn with an Exotic Curse, Dan played Repulse to save his Apprentice and draw a card. Dan then played a Glimmering Angel. Scott tried to Recoil the Angel, forgetting its ability to become untargetable. Dan was then able to play Armadillo Cloak on the untargetable Angel, which ended the game in short order. 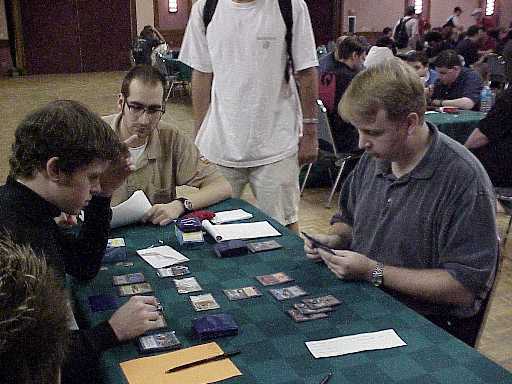 Scott played first the second game, and kept a hand with only two lands and five good spells. Clegg was forced to mulligan to six cards, but was still able to play a first turn Tidal Visionary. Johns played a Dream Thrush on his second turn but then did not play another land until turn five. Dan played an Armadillo Cloak on his Visionary in an attempt to take advantage of Scott's mana screw. Scott's third land was Salt Marsh, which comes into play tapped, so he was still unable to do anything while Clegg got out two tappers. On the sixth turn Scott finally got to play another spell, Exotic Curse on the Cloaked Visionary. This killed the Visionary thanks to the Dream Thrush, which changed the Salt Marsh into a mountain, that Johns wished he had drawn anyway. This didn't slow Dan down much though as he played Zanam Djinn and Glimmering Angel in the next two turns. Despite Scott returning the Djinn to Dan's hand multiple times, he was finally unable to stop either of the two flyers, which eventually killed him.

So Dan Clegg advanced to the final eight in third place, and will get to draft again to try to become Grand Prix champion. Scott Johns finished a respectable thirteenth place, earning $500 and perhaps more importantly two Pro Tour points, putting him in the lead for the race for Pro Player of the Year.