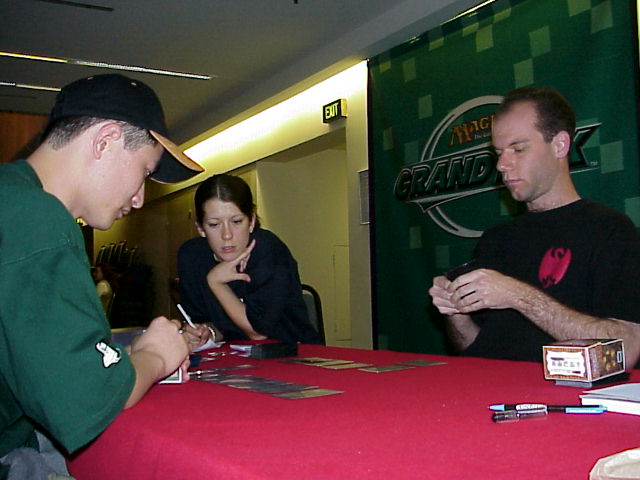 Your Move Games' Dave Humphreys was matched up against one of Melbourne's favorites John Ou. It was a long and important match for two reasons. The reason it was long was that both were playing Counter Oath decks, and important because whoever won would make Top 8 and a draw would eliminate them both.

Dave Humphreys chose to draw and the first of three difficult matches began. The first match started off slow and Humphreys reminded Ou, "I don't wanna rush you, but just remember, a draw is a really bad thing." Sylvan Library was the first card to make it into play, but Humphreys later played and sacrificed Seal of Cleansing to destroy it, clearing the board once again. Ou cast the next spell as well, which was Abundance. All this was rather inconsequential as Humphreys started attacking with his Treetop Villages. Ou Wastelanded two of the Treetop Villages, but Humphreys still had more. With no solution to deal with the Treetop Villages, Ou conceded.

Ou started game two off with a first turn Hidden Gibbons. He was fortunate because Humphreys played Brainstorm almost immediately after, that enabled him to start attacking right away. When Humphreys started discarding, Ou realizing he was mana screwed, yelled "Oh baby!" A combination of the two won Ou the game right away.

As in all three games, Ou went first after he and Humphreys both mulliganed. Ou played a first and second turn Hidden Gibbons. Humphreys followed up with two Seal of Cleansings and Abundance. Ou only let one of the Seal of Cleansings get in play as he Mana Leaked and Counterspelled the other two. 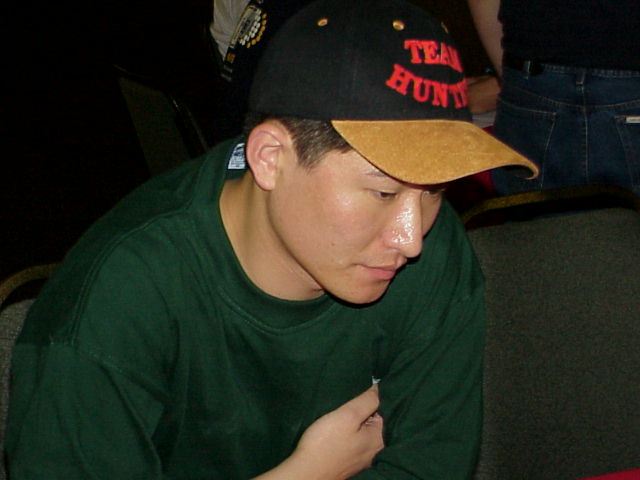 Humphreys drew first blood with his Faerie Conclave. The next turn Ou tried to cast Sylvan Library and had it Counterspelled to which he responded with a Force of Will. In the midst of all that, Humphreys sacrificed Seal of Cleansing to destroy the Hidden Gibbons. The tables turned when Humphreys cast Morphling. He then Swords to Plowshared Ou's Hidden Gibbons which put Ou at 17. Ou then got an Oath of Druids in play and retrieved a Morphling of his own off of it.

Unfortunately this game never ended as the extra turns ran out and Ou and Humphreys came eighth and ninth respectively.