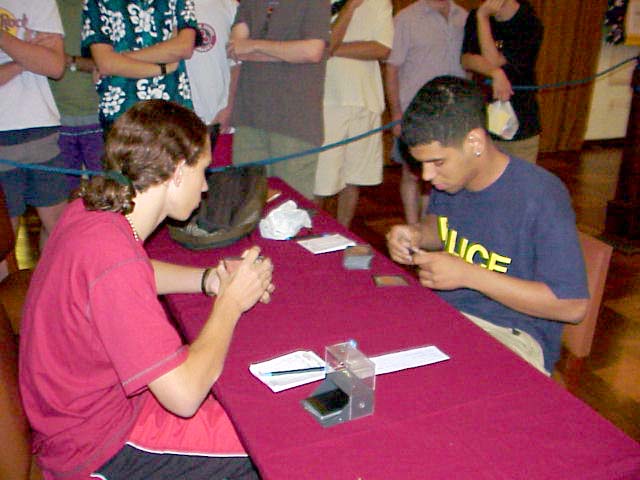 Dave Williams was fully expecting to be able to draw into the Top Eight. However, the pairings did not come out as players thought they would, and all of the top-ranked players were forced to play out their final round. He was paired down against Brazilian favorite Ernesto Mingorance. With twenty-eight points, a win means his spot in the Top 8.

Williams mentioned before the round began that he feared getting mana-screwed out of his Top Eight. The first game saw those fears realized when he stalled at three land. Mingorance was quick to punish him with Quirion Elves, Crusading Knight and Obsidian Acolyte with Strength of Unity.

Williams mustered the best defense he could on such limited resources. He made an unkicked Faerie Squadron, a Metathran Zombie and Cavern Harpy. Mingorance made a Kavu Scout. Three land types meant maximum pain. Williams' two Swamps boosted his Knight from dangerous to vicious. To make matters worse, the Acolyte meant Williams' Harpy was an ineffective blocker.

Williams was visibly shaken from his loss. He shuffled as fast as possible, working out the anxiety. Both players kept their seven-card hands.

On Williams' next turn he tapped three and took a Bog Down from his hand, putting it on the table for a split second. Immediately he picked it up again, replacing it with Morgue Toad. Mingorance stopped play and called a Judge.

Williams claimed that since he did not announce Bog Down verbally, and that his hand did not leave the card, he was not casting the spell. Mingorance said that Williams' hand did, in fact, leave the card, if only for an instant. The Head Judge was summoned. His verdict was that Williams played the Toad, but if such a confusion occurred again, he would be forced to play the first spell shown.

Mingorance sent his Griffin over the Toad's head and made a Glimmering Angel. Unfortunately, his Quirion Elves were producing white, so he couldn't protect it. Williams tried to force it to stay home with a kicked Faerie Squadron. It worked, but only because Mingorance put Armadillo Cloak on his Griffin and attacked.

Williams was in a bit of a bind. He let the attack through and counterattacked with his whole army. He made a Phyrexian Reaper to add to the race. Mingorance swung with both his fliers. The scores stood 17 - 8 in his favor. He cast Kavu Scout.

Williams pounded his deck and was rewarded, drawing a Repulse for the Griffin. This very timely spell undid his opponent's best creature, removing the feared enchantment. Williams attacked all out, trading his Reaper for the Scout, and played a Harpy, bouncing his Toad.

Mingorance sent both his creatures. The Elves got through for 1. The Harpy bounced and killed the Angel. Mingorance Restocked the Angel and Cloak. Still, the tempo loss seemed staggering. Williams swept into the open board for five, knocking Mingorance to 7. He played a Slayer and Morgue Toad.

Mingorance tapped out to replay the Cloaked Griffin. The Griffin's first-strike ability made killing it in combat impossible for Williams. He was once again on the losing end of a race. Williams played Cavern Harpy, bouncing his Drake so it wouldn't give Mingorance four free life. His Slayer went in solo for two. He replayed the Drake and added a Hypnotist.

It was a tricky business, because on one hand, Williams could afford a hit from the Griffin and still attack for the win. However, if Mingorance had anything, anything at all, Williams would lose. Mingorance attacked with the Griffin. Williams decided not to risk losing the game right there, instead double-blocking with Squadron and Drake. The Squadron soaked the damage and died. Mingorance summoned a Halam Djinn.

Williams thought hard for five minutes before deciding on a line of play. First, he Recoiled the Griffin, destroying the Cloak. Then, he used the Hypnotist's ability to reduce Mingorance's hand-size to three. Then he sacrificed his Morgue Toad and two land to Bog Down the rest of his cards.

Finally, things seemed to be looking up for Williams! The dust settled with Williams having his Hypnotist, Harpy, Slayer and Drake to his opponent's Halam Djinn and Quirion Elves.

And then, like a pro, Mingorance topdecked Obsidian Acolyte. Williams didn't even wait for it to hit the table, scooping in the face of the Pro-Black Djinn.