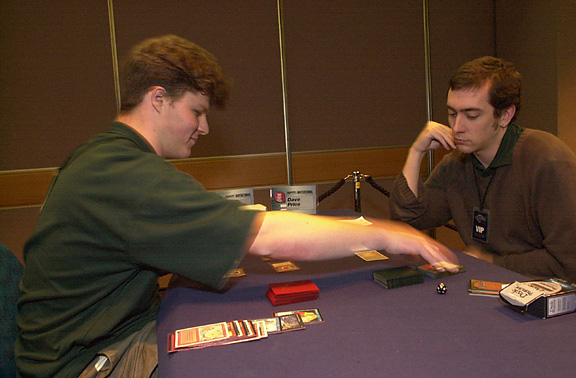 Dave Price is in his third Invitational and he understands how the final few rounds work. Because it's a round robin schedule, every competitor knows exactly which three players they'll be playing during the final three rounds - the Type 1 rounds. Price kept his ears open all weekend and so he knew, before finalizing his decklists, what his remaining three opponents were probably playing. He knew that Gerardo Godinez asked him to borrow Ball Lightnings. And Ben Rubin also asked to borrow red cards. And Alex Shvartsman has a history and reputation as a red player. Thus Dave Price put four Bottle Gnomes into the sideboard of his Mishra's Workshop deck. He also put 4 Hydroblasts, 3 Blue Elemental Blasts, a Triskelion, and an Abyss into his 'board. In addition, Price spent the last two days telling everyone that he was going to switch decks. He announced to anyone who would listen that he couldn't play his Workshop deck because it was too easy to sideboard against. Earlier in the week, before he knew he would be in contention to make the Top Two as the tournament wound down, Price had been testing the deck out in public. Pro Tour New York runner-up Andrew Cuneo sent the deck to him before last year's Invitational, where Price piloted it to a 3-0 record. It may not look like much on paper, what with atypical Type 1 spells like Su-Chi, Juggernaut, and even Icy Manipulator, but all those artifacts justify the inclusion of four copies of Mishra's Workshop (from Antiquities). The Workshop is a land that taps for 3 colorless mana, but that mana can only be used to cast artifacts. In Cuneo's design, those Workshops are like Black Lotuses #2, 3, 4, and 5. Anyway, Price told everyone he was going to audible away from this deck, but it was all just a cover. He played it anyway, but probably reduced the amount of sideboard cards out against him by confusing his remaining opponents.

Ben Rubin was Price's opponent in round 13. Rubin showed up in Sydney with "The Deck" as his best Type 1 deck. He didn't seem to like it very much, but he playtested with Brian Weissman himself and Weissman used his trademark deck to defeat everything Rubin threw at him. However, with Top Two within his grasp, Rubin raced back to the hotel over lunch and got the box of red cards. I had seen their deckists ahead of time so it seemed like Rubin was first in line to be slaughtered by Price's sideboard.

Rubin and Price were half of a four-way tie for second place at round 13 began, one game behind Jon Finkel. When Price played a turn one Underground River and Duress, Rubin commented "Stuck with it Dave? Very nice!" Price answered using his typical deadpan: "I'm a big liar." Price took the Consult out of Rubin's hand and noted that Rubin only hand one land. The bad news, though, was that Rubin used Mystical Tutor as a response to the Duress to put Ancestral Recall on top of his library. Ancestral gave him the land he needed to play Dwarven Miner. Ouch. All Price's lands are non-basics and one of them went away on each of the next 6 turns.

Price used a Workshop to bust out a Su-Chi and attacked with it hoping against hope that things would work out. Price also kept playing land, effectively forcing Rubin to spend all his mana using the Miner. Rubin only had three mana sources so Price's plan was surprisingly effective. In fact, he eventually forced Rubin to block with Dwarven Miner plus a 3/3 Mishra's Factory. Price chose to kill the Miner and then used the mana he got when Su-Chi died to Stroke of Genius himself for 3. (Rubin later realized that he screwed up this turn. He had two Mishra's Factories in play and could have created a 4/4 Factory - big enough to single-handedly trade with Su-Chi.) Next Rubin cast Wheel of Fortune, refilling both players' hands. The Wheel helped Price significantly more because Price drew his Yawgmoth's Will while all Rubin drew was a bunch of 2/1 creatures. Yawgmoth's Will allowed Price to put two more Su-Chis in play and Rubin simply could not deal with them.

Price had to be feeling good as he sideboarded in 12 cards. He even apologized to Rubin, explaining "Gerardo asked us for red cards too." Rubin was happy with his opening draw saying "Hells yeah" as he played a first turn Miner. Price Hydroblasted it away. Rubin then played another Miner, but the crucial play was that he went ahead and used Strip Mine to destroy Price's Underground Sea. Price had another Hydro in his hand, but no more colored mana. Price just sat there and started discarding. He almost came back when he drew Black Lotus and Yawgmoth's Will. In fact, he stabilized the board with two Bottle Gnomes, a Su-Chi, and a Juggernaut in play, but then Rubin top-decked his own Yawgmoth's Will. Rubin's Will was strong - he Demonic Tutored for Kaervek's Torch and Torched Price for more than enough to kill him despite those Bottle Gnomes.

That sent this match to a decisive third game. Both players were taking their time, fully aware of the stakes. By the time game 3 began, Jon Finkel, Alex Shvartsman, and Noah Boeken had each lost and so the winner of this match would be tied for first place while the loser would merely be tied for third. In addition, the winner would have the crucial head to head tiebreaker over the loser in the event they might be tied for 2nd place. "Who boards Bottle Gnomes?" asked Rubin as he sideboarded Goblin Cadets out of his deck.

Dave Price's draw in game 1 was so ridiculously good that the crowd could not keep a straight face. He played out Mishra's Workshop, Sol Ring, Black Lotus, Mox Sapphire, Juggernaut, AND Su-Chi. To top it off, the one card left in his hand was Tinker!! Rubin Lightning Bolted the Jug, but then Price top-decked a Time Walk.

However, Price's play from here was a bit strange. He decided he didn't want to use his Tinker because his Memory Jar was in his sideboard thus the best thing he could get would be another big monster (his options were Triskelion, Juggernaut, Su-Chi, or Karn). He didn't want to get another creature, though, because he was worried that Rubin might have Balance in his deck. So Price just attacked twice (using the Walk) and said "done" with Hydroblast in his hand in addition to Tinker.

Rubin Mystical Tutored for his Ancestral, cast it, and then used Wasteland to destroy Price's Workshop. On his next turn Rubin tried to play a Miner, but Price Hydroblasted it. With Rubin down to 4 it was time for the crucial turn: Rubin had Mishra's Factory, Wasteland, and Mox Ruby in play. Price had Su-Chi, Sol Ring, and Mox Sapphire. Price figured that Rubin probably had a Lightning Bolt and was planning to block Su-Chi with his Mishra's Factory and then Bolt Su-Chi to finish it off. Price did have another one of his 7 Blasts in hand which could counter the bolt, but he decided he didn't want to give Rubin another turn. So Price decide to tap all his mana and sacrifice his Sol Ring to cast Tinker. His plan was to get Triskelion and use it to destroy the Factory before it could block. However, he didn't count on the fact that Rubin might have Red Elemental Blast (or Pyroblast) in his hand. Rubin countered the Tinker with his Red-Blast and then chump blocked Su-Chi with Mishra. This left Price with just one Mox and the Su-Chi in play. When Rubin destroyed Su-Chi on his next turn by casting both Lightning Bolt and Kaervek's Torch (for 1), the game had definitely turned around.

Most spectators agreed that Price's Tinker play was a mistake. By trying to play around a Lightning Bolt that would merely have bought Rubin an extra turn, he opened up a possible loss to Red Elemental Blast. And when Price failed to draw any land over the next five turns, that loss turned into a reality. Rubin eventually cast a Balduvian Horde - his own anti-red sideboard tech - and bashed Price in the head with it.