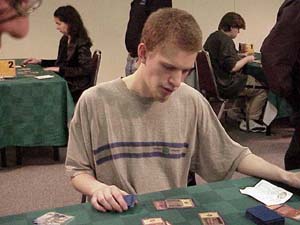 Unlike most of the matches The Sideboard covers during these events, most of our readers probably do not know these guys. Yet their feature match is well deserved: The winner is going to make Top 8, while the loser could still make it if he wins the last round.

Aaron Breider is a Michigan player, defending the honor of the local gamers by playing for the Top 8. He has some previous Pro Tour experience, and finished 12th at Team Pro Tour Washington DC. His opponent is Ed Linskey from Philadelphia. Although Ed has never previously played on the Pro Tour, he recently won a PTQ to qualify for Barcelona. He is now out to get some practice, and try to pick up his first title Top 8 result.

Linskey started off the match by playing an Amphibious Kavu. Breider, who needed to draw a Swamp, cycled an Aggressive Urge on it. Strength of Unity made the Kavu 5/5. Breider cast a Zap trying to draw a Swamp, but still failed. He did get up to five mana, able to summon a Serpentine Kavu. Breider gated the Serpentine Kavu to summon a Horned one, while keeping an Ardent Soldier at bay. Meanwhile, three hits from the Amphibious Kavu brought him down to five life points.

Breider finally drew a Harrow, and cast it main phase to obtain some black mana. He used it to summon a Shivan Zombie. Horned Kavu chump-blocked the Amphibious one. At the end of turn. Breider attempted to kill it by dealing three damage with Darigaaz' Charm, but Linskey saved his creature with Gerrard's Command.

Breider summoned Lava Zombie and Hooded Kavu, bouncing his Shivan Zombie. Both of these creatures blocked on the following turn, and Linskey used an Aggressive Urge to allow his Ardent Soldier to trade in combat for Lava Zombie. Barely hanging in there, Breider summoned a Serpentine Kavu and a Shivan Zombie. Both creatures blocked again, and Linskey spent his second Gerrard's command to let Llanowar Knight he summoned on the previous turn take out the Serpentine Kavu. Unable to scare up enough blockers for one more, Breider conceded.

This game mostly came down to Breider failing to draw a Swamp earlier, as his card quality was high enough to prolong the game, and possibly win it.

Breider sideboarded in two Islands and a Stalking Assassin for this game. He also opted to play first. Breider started off with Quirion Elves, while Linskey summoned a Benalish Trapper. On the third turn, Breider was able to use Elf mana to summon Horned Kavu and re-cast the Elves. Linskey tapped out for an Amphibious Kavu. 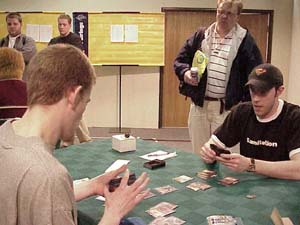 Linskey summoned a Kavu Runner, but Breider was at the ready with his Agonizing Demise. Breider then played a Pincer Spider with kicker. There was a creature stall for a few turns, but then Linskey tapped out to cast Glimmering Angel. Breider took that opportunity to summon his Serpentine Kavu, give it haste, and attack with a pair of creatures.

Linskey summoned a few smaller creatures in the meantime. He double-blocked a Horned Kavu with a pair of Amphibious Kavu, trading it for one of them. Linskey eventually used Gerrard's Command on his Angel to take out a Serpentine Kavu. Although he was down to a low life total, he now had an advantage on the table, and a Meteor Storm he just played.

Linskey proceeded to draw from his bag of tricks, as his Aggressive Urge allowed a Thornscape Familiar to take out Quirion Elves. Familiar blocked a Shivan Zombie next turn. Turnaround is fair play - Breider used his own Aggressive Urge to regain the advantage. He then cast Flametongue Kavu to kill Benalish Trapper, suddenly swinging the game in his favor once more.

Breider top-decked Lava Zombie, which allowed him to re-cast a Flametongue Kavu, deal four damage to the Alpha Kavu Linskey just summoned. Linskey responded with Pollen Remedy, preventing four damage to the Kavu and two to himself. On the following turn, Breider attacked with everything. He responded to Linskey's activation of Meteor Storm with Gaea's Might, ending the game.

Linskey once again opened with an Amphibious Kavu, while Breider summoned a Pincer Spider. Aggressive Urge allowed Linskey to take out the Spider, and Breider replaced it with Ancient Kavu. During that turn, Linskey threw his Amphibious Kavu into the graveyard, even though it was 3/3 and a Spider would not have killed it. They did not notice until a turn later, and head judge Mike Donais ruled that it was too late to go back, the creature staying in the graveyard. 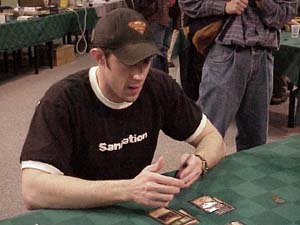 Linskey tried to play Strength of Unity on a Glimmering Angel, only to have it Demised. Several creatures and tricks later, Breider was in control of the board with an Ancient Kavu and Shivan Zombie. Linskey matched with Ardent Soldier and Kavu Runner. Runner attacked, as Linskey was hoping to catch his opponent with Gerrard's Command. Unfortunately for him, Breider had a Repulse ready.

Linskey recast the Runner, and summoned a Benalish Lancer without kicker. Breider summoned a Horned Kavu and his sideboard tech, Stalking Assassin. Linskey drew a card, and passed the turn. Breider kept on drawing the goods - he used a Flametongue Kavu to kill Kavu Runner, and attacked. Linskey failed to draw any answers to the growing horde of creatures, the match going to the Detroit player.