Round 13 Feature Match: High Fives All Around

if you had never read a page of event coverage before this year's Nationals coverage you would be well aware of reigning U.S. National Champion Antonino De Rosa. After a modest 4-3 performance Friday - including a 1-2 start in the Standard portion - he had rattled off five straight wins on Saturday before his matchup with John "Conrad" Kolos: "You could call me John, but you would sound like my dad."

Regular readers of The Week That Was may remember Conrad from my Regionals wrap-up column. He was the Regionals winner who lost his plaque in the aftermath of a party that saw a fire, fistfight, and car accident take place. He would probably prefer to be remembered for qualifying for Nats through Regionals in back to back seasons.

"So are you a Type 2 Master?" asked De Rosa, with a wary eyebrow cocked.

Conrad downplayed the achievement but Ant was leery. "I don't know…It is pretty impressive. I made Top 8 of Regionals maybe once in my life." 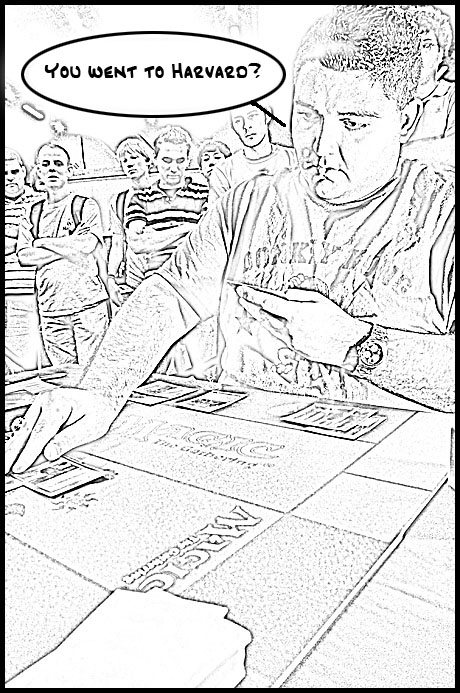 "I am going to Paris," announced Ant as he shuffled his openers back into his deck.

"Good luck with that."

"Isn't Worlds in Paris this year?" offered Conrad, proving the old axiom that if you have to explain a joke…

"Yeah…" eye rolled Ant, who followed up by prodding Conrad for his thoughts on the matchup. Ant's deck had been on display in the feature match area for the past couple of rounds. Everyone knew what he was playing. Conrad, who was playing Sea Stompy, shrugged and claimed to have a near unwinnable match-up.

"I am definitely going to lose after he says this," laughed Ant.

Conrad led off with a Bird of Paradise while Ant slammed down the much bigger Watchwolf on turn two. "The only reason I play this deck is because this guy is so big. Ken Ho calls him a thug."

Conrad's Bird powered out Trygon Predator, but he had to take 2 from a shockland to do it. He fell to 15 on Ant's attack. Conrad got back in for 2 and summoned Kird Ape with Mana Leak showing. Ant played it cautious and offered up Llanowar Elves when they resolved he passed with no attack. Conrad continued to get in for two. Despite being stuck on two land he summoned his fourth mana source with his own Llanowar Elves. As this was happening, Craig Gibson began snapping pics for the feature match coverage. Conrad protested: "Wait 'til I take my ugly shirt off. I have my Harvard shirt on under this."

Ant was impressed, "You went to Harvard?"

"No, but I wear the shirt all the time. I got it from a girlfriend."

"Dude! I hope my date's shirts never fit me."

De Rosa passed his next turn with no play and fell to 12 solely on the wings of the Predator. Conrad was still stuck on two lands and passed with no play. Ant channeled Arashi at end of turn. Conrad Electrolyzed the Elf on the Bird's way out.

"Whew," said Ant. "I thought that was going to be Voidslime for a second."

He untapped into Jitte, which drew a "wow" from Conrad as well as Remand. Ant replayed the equipment but did not have the mana to equip. He equipped the following turn and Conrad had to double block the Watchwolf. Ant killed the Ape and got two tokens on Jitte. Ant fumbled for change for the two counters but Conrad simplified matters for him: "Just kill my elf and you will only need one." De Rosa obliged him. 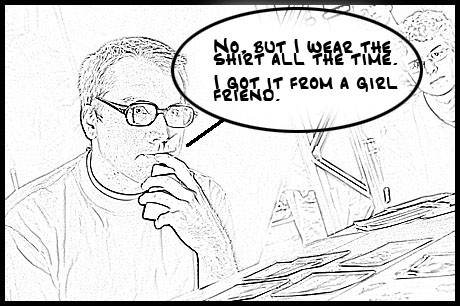 Congregation at Dawn was Mana Leaked at the end of Conrad's next turn. It didn't matter as De Rosa was already holding the Yosei. When he played it, Conrad high-fived the confused Champ.

"I got a high five from my opponent? That's definitely never happened to me before."

"I'll take whatever I get," laughed Ant. "High fives, hugs, kisses. Whatever I can get. My mom says I have nice cheeks."

The game was over soon thereafter.

"I told you it was bad," sighed Conrad as he looked over his sideboard.

Third turn Predator got the second game underway for Conrad. Ant announced his Watchwolf by its apparent new nickname: "Thug." Kolos did a little human beatbox thing for effect.

Conrad missed his fourth land drop but was ready with a sweet sequence of cards when Ant played and equipped Umezawa's Jitte to his Watchwolf. Ant was tapped out, and his opponent Repealed the Watchwolf and smoked the Jitte when he attacked back with his Predator. Ant did stop the game for a second to consider his hand. Since he was tapped out he was either tipping off or bluffing Shining Shoal. Knowing Ant, I would pick the latter. Either way he picked up the Jitte and put it in the bin.

Conrad had a Jitte of his own and the Predator swooped into the red zone clutching it in its talons. Conrad was able to keep Ant off of any extra mana with the judicious use of Mana Leaks and Jitte counters. Ant Congregated for Viridian Shaman but was stuck on five lands. "If you have Mana Leak or Remand, just show it to me and I will concede."

"You gonna win this time if you are on the National team?" asked Conrad.

"Thanks…let me know when you get there." Ant didn't finish the sentence with a derisive "kid," but I could have sworn I heard it hanging there.

"Not going to happen," assured Conrad, a fixture on the PTQ circuit, who was dubious about going even if he won. "They don't pay your airfare do they? I mean what's expected value for someone like me?"

"You use some fancy words there like "expected value." Are you a poker player or something?"

"Worse," grimaced Conrad, pushing his glasses up the bridge of his nose. "An economist." 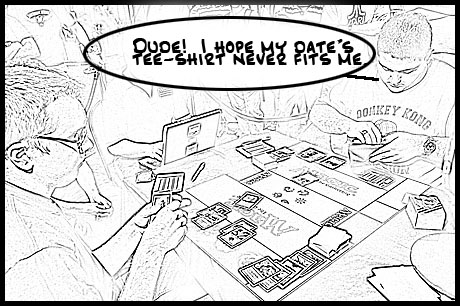 Ant led off with Llanowar Elf while Conrad took two from Breeding Pool, showing/bluffing Spell Snare. Ant eyed him for a read but decided to avoid the issue and summoned Wood Elves. He got another high-five from Conrad.

"You didn't do anything worth high-fiving over in the second game. You really should have given me a high five for the Repeal."

"You are right," admitted De Rosa as his second Wood Elves was Mana Leaked. Conrad chose not to pay for his next Breeding Pool and fell to 14 from the Elven assault. De Rosa declared, "You are not Spell Snaring or Mana Leaking any more of my spells. If I have to kill you with 1/1s, so be it."

Carven Caryatid stopped De Rosa in his tracks. "Whoa…that is a good one." He made an Outpost token at end of turn. With Conrad tapped out he snuck Kodama and a Jitte into play. Conrad found a fourth land and mustered Trygon Predator and Llanowar Elf.

Ant showed no fear. He equipped his Wood elves and attacked with everyone. Conrad did not like the smell of this one: "Ewwwwwww." He blocked the unequipped Elves with Carven Caryatid. De Rosa showed off the power of Shining Shoal by hard casting the spell to send the Caryatid damage in the direction of the Predator.

"How does this work?" asked Conrad, trying to see how he could survive.

"I don't know," shrugged Ant. "I have never cast this spell before in my life."

"You've always pitched cards to pay for it?"

"No, I have never cast the spell in my entire life before. This is the first time."

That was pretty much the game, and Conrad laid his cards on the table - there was no Spell Snare there. He may not have won the game but he did keep the Jitte at bay for several turns with his Breeding Pool bluff.

Antonino needed either a win or a draw to ensure a trip to the Top 8 of U.S. Nationals to defend his title.