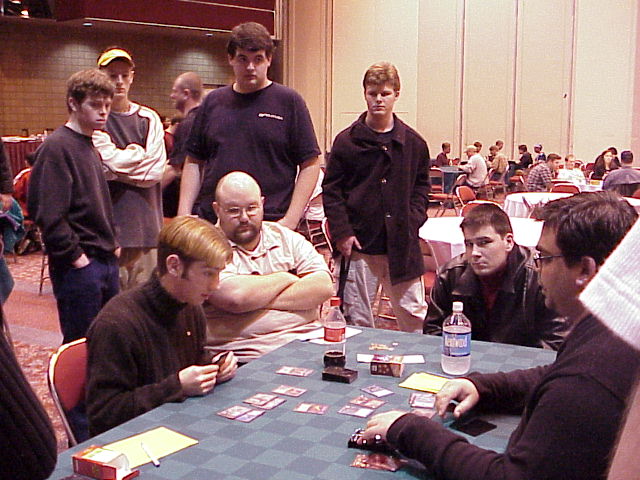 In round 13, it's all about making the Top 8 or playing for money. Jamie Parke and Andrew Diaz-Matos both entered round 13 looking to make the Top 8, and finish with a big paycheck in their wallets. Both players are from New York, Diaz-Matos is from New York City, and Parke is from upstate. Andrew won the coin flip and opted to play first.

Andrew kept his opening hand, and Jamie looked at his with disgust. He mulliganed into a nearly identical hand, but with still just the one land. He mulliganed again, and drew nearly the same hand again, with Washout and Cinder Shade as the opening bombs. He kept, and Andrew began. Andrew was mana light, but still laid lands through turn three. He didn't let them stop him from playing a creature every turn. He opened with Rogue Kavu, followed it with Viashino Grappler, and played a Tower Drake. All of this with three land. Eventually he had to Probe without kicker, just to get the extra land he needed to combat the beats that Parke was laying out. Even with his mulligan, Parke was making a strong showing for himself, Exotically 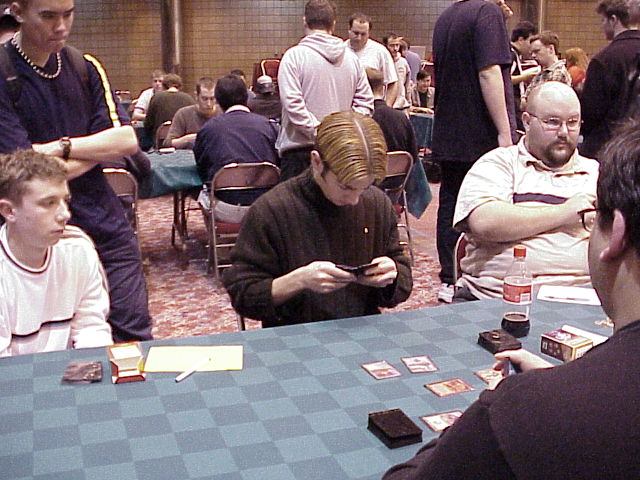 Cursing the Viashino Grappler, trading a Pyre Zombie for the Rogue Kavu, and playing a Firescreamer. He recalled the Zombie, and calmly peeled a swamp off the top of his deck so that he could recast it. Andrew played a Faerie Squadron with kicker, and followed that up with a Rainbow Crow and a Vodalian Zombie. Parke used his Pyre Zombie to hurl a flaming ball of death at the Crow, and then on his upkeep, he recalled the Zombie. He then played his Cinder Shade. He also played his Zombie. The Firescreamer and the Vodalian Zombie traded in combat, and the board was down to land and three creatures, two of which were wrecking Andrew's top 8 dreams.

Andrew knew he needed to get back in the game quick, and after attacking with his Tower Drake, he cast Void for 3, killing all the creatures on the board, and revealing Parke's hand of Wash Out and a land. Parke was relatively unfazed and topdecked an Andradite Leech and played it. He also replayed his Zombie, and on the next turn when he attacked, Andrew used Spinal Embrace to kill the Leech. He then played Urborg Shambler, killing the Pyre Zombie and the newly played Nightscape Apprentice and Phyrexian Battleflies. The Shambler looked like it would destroy Jamie, and then HE topdecked Void, and used it to kill the Shambler and take the Agonizing Demise out of Andrew's hand. After that, he topdecked again, and played a Pouncing Kavu and served. 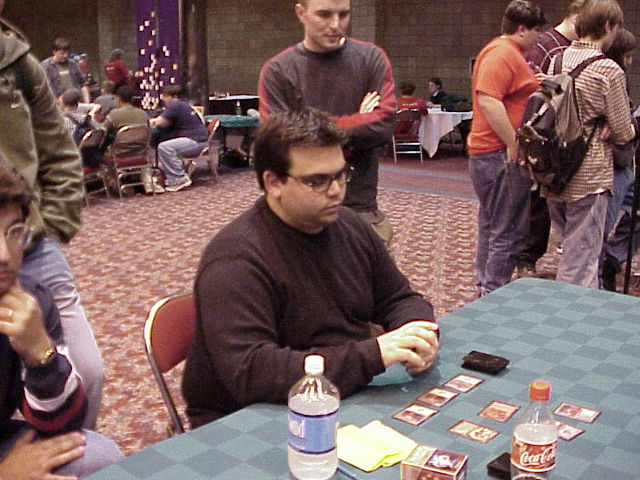 Game 2 had similar plays and tones as game one, with similar results, even taking nearly as much time - 20 minutes plus the additional five turns. Had the game gone on, it's possible that Parke would have outright won the match, but the game ended on time, giving Parke the win and a berth into the top 8. The crucial play of the match was when Parke Stunned his own Pouncing Kavu after Andrew had Spinal Embraced it and was planning on using it to block his attacking Treva's Attendant. Andrew also Scorched the Pyre Zombie out of this game, and was also to play an Urborg Shambler again, netting three card advantage again.