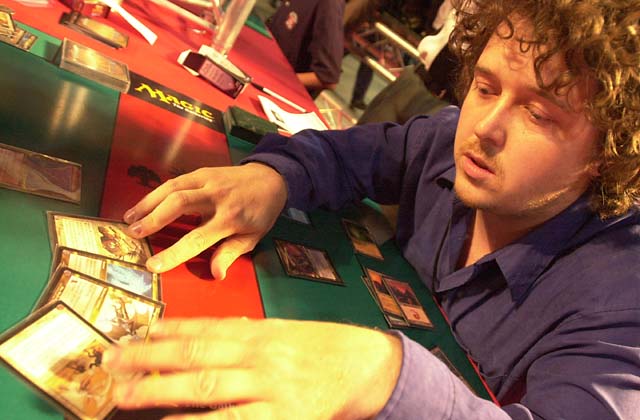 Finkel are Comer have thirteen Pro Tour Top 8s between them. Finkel needs to win his last two matches (and complete a perfect Day 2) if he wants #10. Comer needs to win one of the next two to put up #5. That would tie him for the second highest number of Top 8s all time with Olle Rade, Darwin Kastle, and Scott Johns. To add even more subtext to their round 13 Feature Match, Finkel fed Comer during the draft. Finkel took Benalish Heralds with his first pick, and passed a Blind Seer to Comer. After that Finkel passed amazing black and red cards to Comer in an attempt to get him out of blue, or at least make sure he wasn't blue-white. Comer wound up with a very high quality black-red deck (3rd pick Tsabo's Decree and 4th pick Keldon Necropolis will do that) that has just a touch of blue (for Zanam Djinn and several kickers, but not enough for Blind Seer). Finkel wound up with a decent blue-white touch black deck that Ben Ronaldson described as "Not a 3-0 quality deck unless it has an amazing pilot. Um, wait a minute." You can read more about their draft if you click here.

Finkel used Recoil and Dromar's Charm to slow Comer down early in game 1 plus he had a Galina's Knight to hold off Comer's Kavu Aggressor. Finkel played out a pair of Glimmering Angels so he could start racing, but he was way behind in the damage race and felt he had to trade one of the Angels for a Nightscape Battlemage. Wings of Hope on the other gave him three points of flying offense and then Ardent Soldier with kicker reduced Comer's offense down to just the pro-white Shivan Zombie.

Comer then drew land #6 and dropped the bomb: Nightscape Battlemage #2 with the blue kicker bounced both of Finkel's blockers and allowed Comer to come across with his whole team. Finkel drew one more card and then scooped. 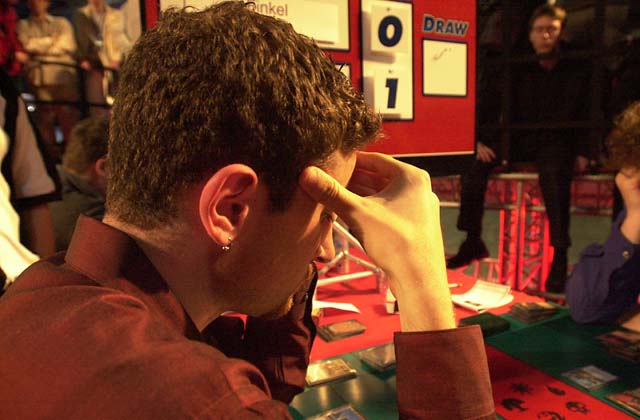 The players shuffled up for game 2 quickly and quietly. Comer wished Finkel luck again and they started game 2 with 50 minutes left in the round. Game 2 started the same way as game 1 - Comer played a Shivan Zombie and Finkel Recoiled it. The play was also the same - fast, serious, and deadly. The players had obvious respect for each other and neither really wanted to knock the other guy out, but they are both professionals and knew what they had to do. Finkel played Prison Barricade with kicker on his fourth turn and Probe with kicker on his fifth. He discarded Coastal Tower and Reviving Vapors while Comer discarded two more land (he had also lost a land on that Recoil). Comer played a fifth land on his fifth turn and still didn't have any spells to play. Finkel leaned forward, seeming a bit more confident as he played out Benalish Heralds. He slouched a bit, though, when Comer Agonizing Demised it (with kicker). Meanwhile Shivan Zombie and Prison Barricade continued racing. After Comer played out his Zanam Djinn, Finkel paused to think for pretty much the first time in the match. He decided to play Wings of Hope on his Prison Barricade and leave it back on defense. At 3/7, it seemed a formidable blocker, but Comer had the answer once again - Tsabo's Decree naming "Walls." This not only cleared away the big blocker and sent two of Finkel's cards to the graveyard, but it also gave him a chance to study Finkel's hand. 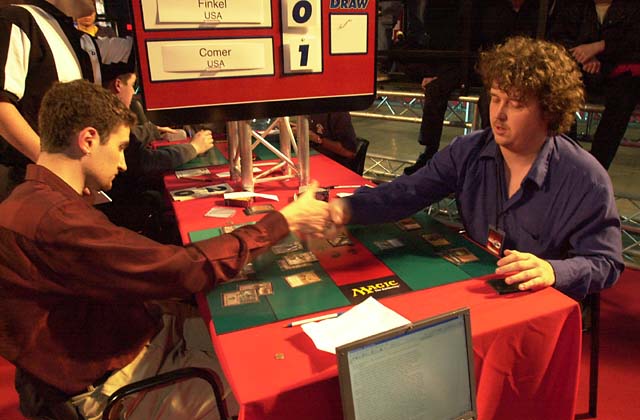 Finkel did his best to stabilize, putting his other Wings of Hope on a kicked Ardent Soldier and playing out a Glimmering Angel, but he was down to 3 life and Comer had Keldon Necropolis in play. There just wasn't anything Finkel could do. The crowd, which often bursts into applause at the end of big Feature Matches, was eerily silent. Alan Comer is a well-liked guy, but their hero had just lost. Everyone likes to have a god walking among us, and there was no joy at seeing Finkel look mortal. Mighty Casey had struck out.

[Editor's note: Finkel finished in eleventh place, earning $5,000. So it's not like he's going home empty-handed]