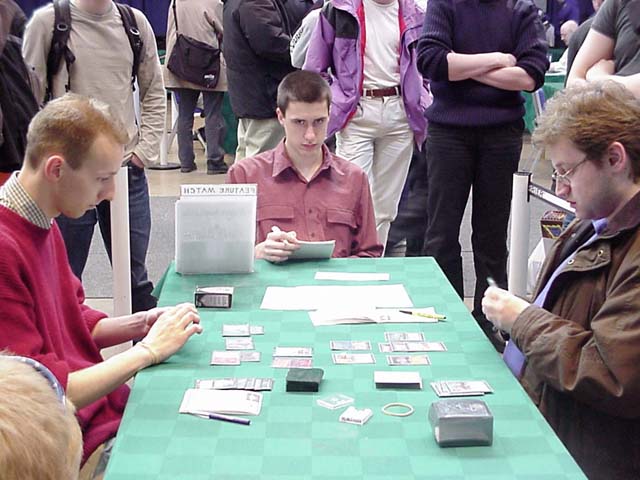 Jos Schreurs and Alex Shvartsman were fighting for a spot in the top 8 of Grand Prix Gothenburg. Alex Shvartsman was paired down for the second time in a row preventing him from drawing in the top 8. He was playing a White/Blue deck with a splash of black against Jos' Red/Black/Blue deck.

Jos plays a turn five Recoil on his opponent's Barricade and attacks for his first points of damage. Alex plays his Dromar's Cavern and removes the Kavu with an Exotic Curse. Jos' next turn sees him playing a Slingshot Goblin and a Bog Down with kicker to which Alex discards Plains, Benalish Lancer and Rushing River.

Alex then replays his Prison Barricade and attacks again with his Knight. Next turn Jos plays a Hooded Kavu and passes the turn. Alex casts a Washout and returns Jos' creatures to his hand. He then attacks Jos to ten. Jos then plays a Faerie Squadron with kicker, which stops Alex' attacks. Alex has no plays on his next turn and Jos replays the Hooded Kavu.

Alex's Glimmering Angel trades with a newly cast Tower Drake during Jos' attack phase. Alex then casts a Disciple of Kangee, but still can't find a way to get anything past the Faerie Squadron. Jos then finally replays his Slingshot Goblin, all the while attacking with his Hooded Kavu each turn to get in a few points of damage. A Benalish Emissary from Alex doesn't change much, but the turn after that he topdecks a Zanam Djinn, which seems like it may finally break the stalemate created by the Faerie Squadron.

Jos has a pretty good topdeck himself though, as he plays a 2nd Faerie Squadron the turn after the Zanam Djinn hits the table. Alex gets himself another big creature as he casts a Benalish Lancer with the kicker. This doesn't matter anymore though, as next turn Jos Recoils the Djinn and the 2 Faerie Squadrons together with the Hooded Kavu take Alex' last 8 life points.

Jos sideboards out his Vicious Kavu for a Gainsay while Alex takes out his Benalish Emissary to get another Disciple of Kangee in his deck. Alex plays first and after a second turn Worldly Counsel, where he takes Benalish Lancer over Prison Barricade, he plays a Disciple of Kangee. Jos proceeds to lay a mountain, which gives him access to all his colors once again. He then casts an Urborg Drake.

Alex plays the Benalish Lancer on his next turn. And Jos follows his Drake with a Mire Kavu. The Mire Kavu is returned to Jos' hand on Alex's next turn thanks to a washout and Alex attacks with both his creatures. Jos then plays Kavu Scout leaving two Islands untapped. In Alex' next combat phase he attacks with his 2 creatures once again. The Lancer is blocked by the Kavu Scout and when damage is on the stack he attempts to Rushing River his Lancer and the Urborg Drake that has been damaging him the past few turns. Jos has a Gainsay though and the Lancer dies, while the Urborg Drake remains on the board to attack.

Jos then plays a Bog Down, which gets the rest of Alex' hand and plays a Sky Weaver. Alex then plays a Glimmering Angel and Jos replays his Mire Kavu. When Alex then plays a Galina's Knight it's Recoiled at end of turn. In Jos' next combat phase another Recoil is played when the Angel and Disciple try to kill the Mire Kavu. Alex scoops and Jos then shows him the third Recoil he was holding.

Jos advances to his first ever Grand Prix top 8 and qualifies for Pro Tour Barcelona, which was his main goal for the weekend.