It's a tough situation in the final round. The top eight players have all intentionally drawn, leaving thirty-one points as the cutoff. Even then, a victory from a twenty-eight pointer might not be enough to secure a berth. Jun "The Japanese Mike Long" Nobushita is hoping it will be. Across from him sits Tadashi Yokoyama of Osaka. Yokoyama's been sharpening his game, apprenticing under some of the best mages in Osaka. He very nearly struck gold at Grand Prix - Hiroshima, but was knocked out in the final round by eventual finalist Masaya Mori. Though his twenty-seven points mean he can't make Top 8, the invitations are likely to pass down, giving him a ticket to the Tour. 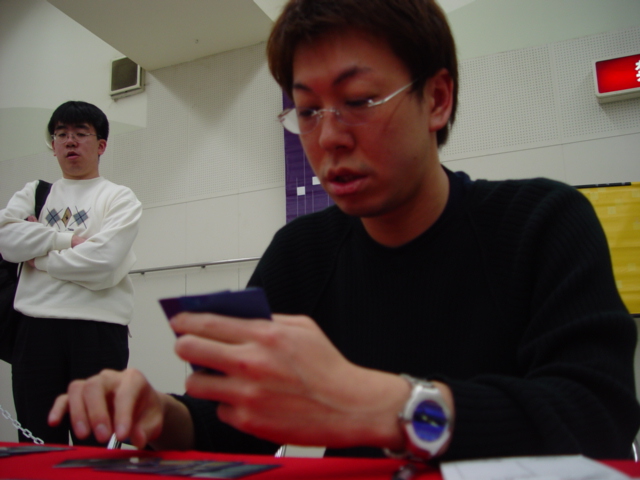 Nobushita started the beats with Aquamoeba and Skywing Aven. Yokoyama blunted the force with Pilgrim of Justice and Hallowed Healer.

Nobushita could only muster a mediocre Stern Judge. Yokoyama dropped Tattoo Ward on his Pilgrim and started swinging, with Mystic Visionary bringing up the rear. Nobushita's Treetop Sentinel was answered by Yokoyama's Aven Flock, and now the board was locked up.

Yokoyama thought he had the stuff to break it up in his Psionic Gift, but Nobushita was ready with Liquify. Not only that, but he drew into Nomad Decoy, giving him the ability to break through. Floating Shield against white also looked good, but Yokoyama was ready with Repel.

Nobushita started working. Churning Eddy on the Pilgrim enabled his Kirtar's Desire, while his Cephalid Broker got him to threshold. Yokoyama floundered, unable to answer Nobushita's Nomad Decoy. He tried Second Thoughts to slow the pain, but had to Aether Burst to stop a Nobushita Shelter. Nobushita didn't stop swinging until Yokoyama was dead.

Nobushita boarded in some black removal for the second game, knowing that trick creatures like Healers and tappers would be key. He started off strong with Aquamoeba and Skywing Aven. Yokoyama matched his bird, and played Resilient Wanderer.

Unfortunately, Nobushita's transformative splash had left him without plains, and worse, he didn't have a fourth land to bring his Broker online. Yokoyama kept up the pressure with Aven Flock and Cephalid Scout. Finally, Nobushita found a plains, and hoped his Hallowed Healer would give him the time he needed. 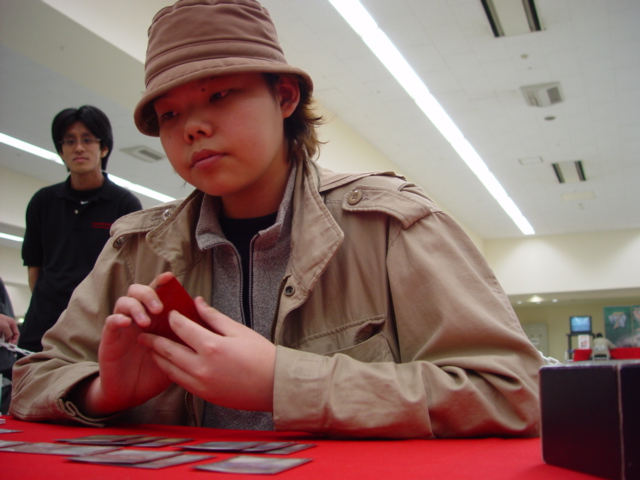 Yokoyama piled it on. Pitching Teroh's Faithful to give his Wanderer pro-blue, he swung in with everything. Cephalid Retainer made sure he could keep Nobushita short on blockers. Though Nobushita had lands a-plenty, he could only stop most of the damage. When Yokoyama hit four islands, it was over.

In game three, Yokoyama started out with all plains. Nobushita started hitting early with Patrol Hound and Cephalid Broker. When Yokoyama did find an island and used it to make an Aquamoeba, Nobushita sent him back to square one with Churning Eddy.

Yokoyama replayed his island and Aquamoeba, and Nobushita used Waste Away for force through still more damage. Skywing Aven reduced Nobushita's pressure to just the Hound, but Yokoyama was running out of time. Aven Archer showed up for Nobushita, making things doubly difficult. Mystic Visionary was a slim hope, indeed.

Nobushita swung again. Yokoyama bounced the Archer. Rather than rescue with Shelter, Nobushita let it go. Then he let his Broker die at the hands of the Skywing Aven. It didn't seem to matter to him, so long as damage kept coming. He played a Treetop Sentinel. Teroh's Faithful bought Yokoyama some time, but the Archer returned, and he was facing four damage in the air a turn. He double-checked the situation, then scooped.