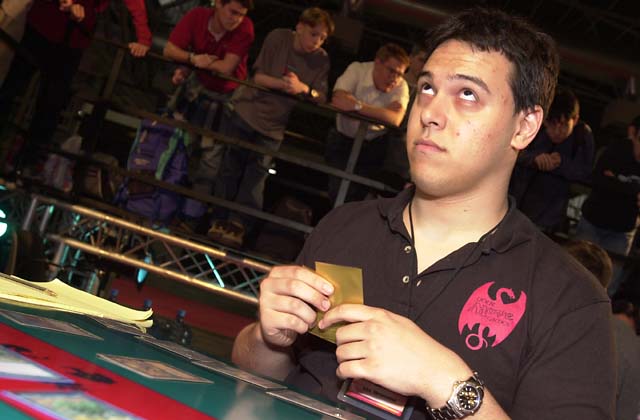 The animated Justin Gary was downright kooky. He was, by his own admission, "flying high" off an energy drink. It showed. He moved about so much that he seemed to be two men. Benedikt Klauser was almost certainly one man. He wore the same relaxed attitude he had in the days early rounds.

Gary mulliganed, his head bobbing to the beat of music only he could hear. He played a Nightscape Familiar, which Klauser dug with an unkicked Probe, discarding two lands. He followed it up with Tower Drake, all the while enduring slow-motion zombie beats.

Gary slapped a Mourning on the Drake and continued to send. Klauser Probed again, this time with kicker, discarding more land. Gary revealed his other color by pitching a pair of Vodalian Zombies. All he could muster on his next turn was Power Armor, and he knew things weren't going his way.

Klauser asked how many cards he had, Gary showed him two. When he saw that Klauser held six, he let out a sigh and said "It's not looking good for the home team." Then he realized he wasn't the home team.

Catching Gary tapped out, Klauser Soul Burned the Familiar for one. Gary still couldn't draw what he needed, so he gave Klauser the time to drop back-to-back Sea Snidds, the second with a Ravenous Rats kicker. Gary tried to keep up, but it's hard to match an opponent who replenishes his hand with Fact or Fiction. A Terminate on his last blocker finished him.

Gary boarded in "The Combo": Shifting Sky, two Obsidian Acolytes, and two plains, taking out Death Bomb, Magma Burst, two mountains and Battleflies. The idea being that the Acolytes punish Klauser's many black creatures, and if he gets the Sky in play as well, well, it's all kinds of over.

Klauser boarded in "The Bog Down": Bog Down, for Prohibit.

Gary got things rolling quickly in Game 2. He forced Klauser to play first, and busted out an Acolyte and a Sky Weaver. Klauser's kicked Urborg Skeleton was token defence. Gary used the Acolyte's ability to swoop in for three.

Klauser untapped and Probed with kicker, discarding two lands. Gary's choice was harder, eventually choosing to lose Bloodstock and Hunting Drake. He put a Sleeper's Robe on his Weaver and brawled again.

Klauser made a Weaver of his own and Gary held back. Klauser Fact or Fictioned into a Drake and two lands. He sent his Weaver for damage, Gary was unwilling to trade, and made the Drake. Gary Demised it at end of turn. 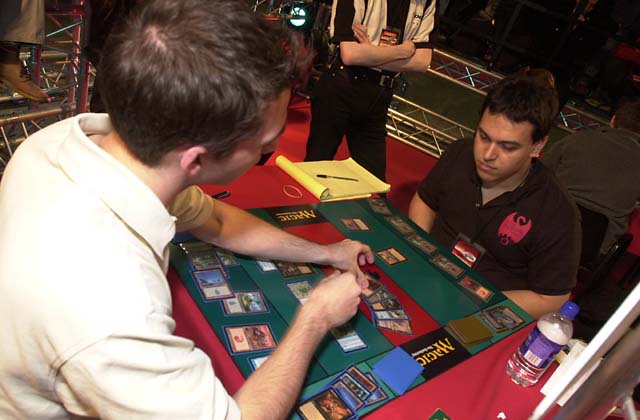 Gary couldn't take the suspense any more. He used his Acolyte on both his creatures, destroying his own Sleeper's Robe but forcing through three more. Klauser Recovered a Tower Drake and cast it. Then he tapped out for Ravenous Rats.

Consulting the life totals, and seeing he was ahead 17 to 10, Gary went for the Big Gun: Shifting Sky. Now his Acolyte would put Klauser in a world of hurt. Gary knocked him to five, ready to win on his next turn. Klauser double checked his hand full of nothing and scooped.

Klauser went back to his sideboard, bringing Sisay's Ingenuity and Prohibit (the better to deal with Acolytes) for the Skeleton and Lava Zombie. Gary brought in Battleflies and Cursed Flesh for Hunting Drake and Sleeper's Robe.

Klauser chose to play in Game 3, which made the bubbly Gary even happier. A mulligan from Klauser and the game was afoot.

Gary dropped a plains to Klauser's Ravenous Rats, but kept them at home with a Vodalian Zombie. Gary offed Klauser's Tower Drake with Cursed Flesh and summoned Battleflies, but in the process stunted his mana with Dromar's Cavern. He also mellowed out a bit.

Klauser failed to act on his turn, and Gary went a-smashin'. Klauser's only response was a Sisay's Ingenuity, which earned him another drubbing. Gary added a Sky Weaver to the table.

Klauser Probed without kicker, desperate at ten life to find an answer to Gary's Perpetual Four-Point Beatdown Machine. He got a Cavern Harpy, which did the job. Gary didn't want to lose his creatures, and so held back, making a Phantom. Klauser replayed his Rats, catching an Island from Gary, and cast Soul Burn on the Phantom. This seemed a mistake, since the evasion ability offered by the Sky Weaver was more dangerous than one dude.

Gary Opted into Obsidian Acolyte and played it, but Klauser was ready with Prohibit. Both players added creatures to the board. Suddenly, Klauser went on the offensive, sending with his Harpy. Gary let it through. Klauser bounced the Harpy and replayed it, gating out the Rats and replaying them as well. The end result was an untapped Harpy. 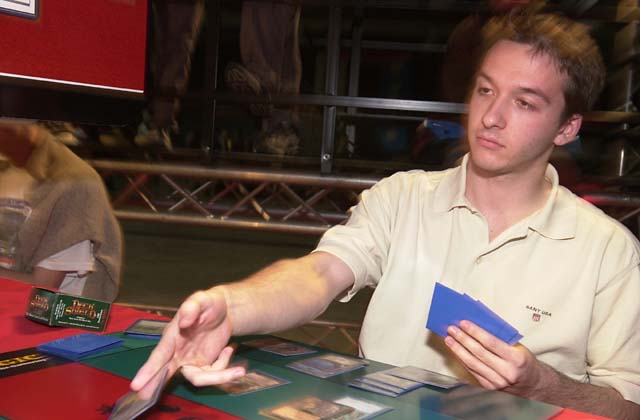 He tried the trick again on his next turn and Gary tried to Demise his Drake. Klauser had Spite at the ready. The ground muddled with a Vodalian Zombie and Bloodstock for Gary, and a Snidd and Nightscape Familiar for Klauser.

Gary enchanted one of his Zombies with Sinsiter Strength and sent it and the Bloodstock to the air with his Sky Weaver. Klauser doubled Harpy & Drake double up on Zombie, and the Harpy is saved. Klauser fell to five.

The Weaver decided to work a little overtime, shuttling the Bloodstock and two remaining Zombies into the wild blue yonder. Klauser shuffled his creatures around, but they still didn't have flying. He extended the hand.