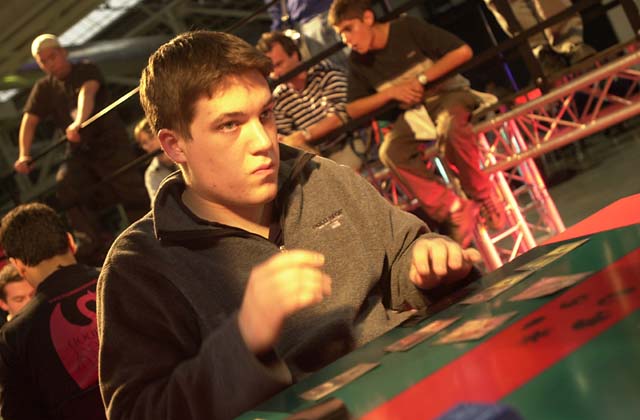 Kai fought the Law and the Law won.

Going into the match, Kai reckoned on being favorite, as he had a quite a few fatties in this r-g splash black mirror-match. These included Kavu Titan, Serpentine Kavu and Darigaaz the Igniter. Had Kai won, he would definitely have been in the Top 8, whereas Law might struggle with tie-breakers if he does not get at least a draw in the next round.

Kai won the toss and elected to play first but had to mulligan down to 6 cards, keeping what his face told to be a fairly weak hand. Albertus made the first play on turn one, a Thunderscape Apprentice, and Kai had to cast Aggressive Urge on it at the end of Law's second turn to try and draw into something relevant. The 1/1 guy was not too threatening though, as Kai cast Harrow in his third turn leaving himself with two forests, a mountain and a swamp, then cast a Thornscape Familiar.

The Apprentice then challenged the Familiar to block (it didn't) then Law made a Verduran Emissary. Kai then took advantage of his green familiar and cast a Thunderscape Battlemage with the black kicker for only 4 mana - forcing Law to discard a Terminate and a Slingshot Goblin. Unfazed, Albertus cast Maniacal Rage on the Emissary and served for 4. Budde replied well with a Kavu Climber then a Serpentine Kavu, but the latter was Terminated and suddenly the race was on again. On his next turn, Albertus cast an Aggressive Urge on his Emissary to draw into another card as it attacked. This reduced Kai to 5. Kai reduced his opponent to 8, attacking with his Battlemage and a Kavu Climber, and left a Grappler and a Quirion Sentinel to block, but was horrified to see a kicked Skizzik hit the table. Had Law not cast the Aggressive Urge the turn before, Kai could have gone down to one, cast Maniacal Rage on a creature and attacked back for the win, but he had to chump with both the Grappler and the Sentinel. 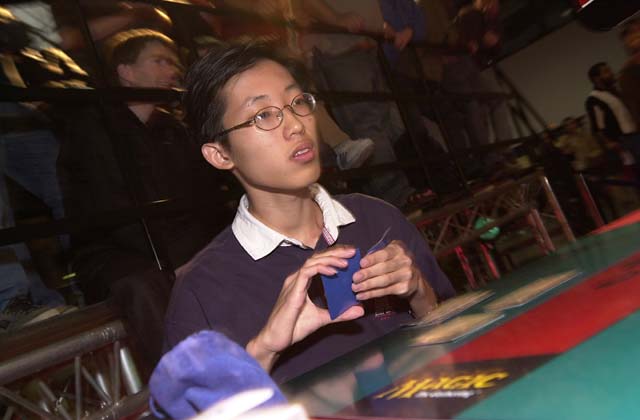 Still alive though, and with the Skizzik in the bin (the Grappler traded with it despite the trample damage) Kai cast the Maniacal Rage on his Climber and served for 5, reducing his Albertus to 3, leaving the Thunderscape Battlemage back to chump the Emissary. With only one creature in play to block Budde then lost to a kicked Pouncing Kavu joining forces with the Verduran.

Once again Kai elected to go first, but had to mulligan once more. Keeping his six card hand he made a 1st turn Thornscape Apprentice, followed by a 2nd turn Quirion Sentinel (burning for 1) a 3rd turn Grappler and a 4th turn Kavu Scout. Unfortunately for him, Law had cast a Barbarian on turn 2, then a Horned Kavu on turn 3 which could hold off all of the aforementioned creatures.

Albertus started going on offense fairly quickly when Kai stopped casting spells with a kicked Pouncing Kavu and an Explosive Growth dealing with the little guys. When Kai eventually had to double-block the Horned Kavu with his freshly cast Serpentine Kavu and the Kavu Scout, they managed it, but the Serpentine was Strafed after combat.

The last two turns of the game saw Law forcing Kai to chump block, with Kai drawing Darigaaz the turn before he died to multiple attackers.