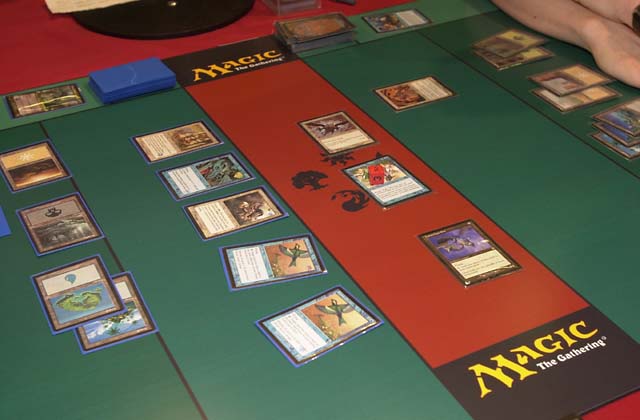 Cornelissen won the die roll, and chose to play first. While shuffling, Johns asked Cornelissen why he picked a Tower Drake over a Wash Out in the draft. Cornelissen explained that his deck needed creatures that cost three, and Wash Out wouldn't hurt his deck much. Johns seemed to disagree, pointing out that Wash Out is great against other decks.

Play proceeded normally, with Cornelissen playing a second turn Obsidian Acolyte. On the following turn, Cornelissen attacked with the Acolyte. Johns drew, and was visibly upset. He slammed down the card draws and commented, "This is not a time for mana screw!" Rather than discard a card, he played a Prison Barricade without kicker.

Cornelissen played his first major threat in Razorfoot Griffin. Johns then finally drew an Island, giving him one land in every color of his deck. He played a Tower Drake, and ended his turn. Cornelissen attacked with his Griffin, and continued to build his aerial army with a Faerie Squadron. Johns took his next turn, and drew. He turned directly towards me, and spit out a sarcastic, angry "Whatever." He played a Lancer without kicker, and sent the turn over. Cornelissen's Griffin and Squadron came through for five damage, and had no creatures to play.

Johns draws, and obviously still had no lands. "I have enough land! I know I do. I built the deck!" complained Johns. The path was cleared for his Lancer and Drake, which came through for four damage. Still, it was very obvious that Johns could not win this race. He played an Urborg Drake, and ended his turn. On the following turn, only Cornelissen's Squadron attacked. The Griffin could not due to the untapped Urborg Drake on Johns' side of the table. Cornelissen then played Lotus Guardian, which amused Johns. He joked, "Seven mana is like a fantasy to me. I would have died twice before I got seven mana."

Johns untapped, and analyzed the grim situation for his Urborg Drake. "That is a nervous Urborg Drake...would you like to concede? What if I don't want an attack phase?" The good news for Johns was that he drew a second Island to bring his total land count to four. Still, he had already lost a significant amount of tempo. He looked at the Drake and said "Let's just get that out of the way. Something blocked it." He followed up with two Dream Thrushes and yelled "My army is invincible!" A photographer then took Johns' picture, which caused Johns to take up a sarcastic tone. "Every time this guy takes my picture I'm losing. You're Fired!" Even though he was losing, Johns was doing his best to entertain the onlooking crowd. Cornelissen increased his army with a Noble Panther. Johns then drew a fifth and, but it was too late. Cornelissen's Repulse at the end of the turn cleared the way for him to come through for the win.

Mark Rosewater went to adjust the sign at the Feature Match table to mark what the game score was. When he reached to give Cornelissen a game win, Johns commented "He beat me so bad it should count as two." Rosewater gave Johns a look as if to suggest "Are you sure?" Johns quickly responded with "I was joking." 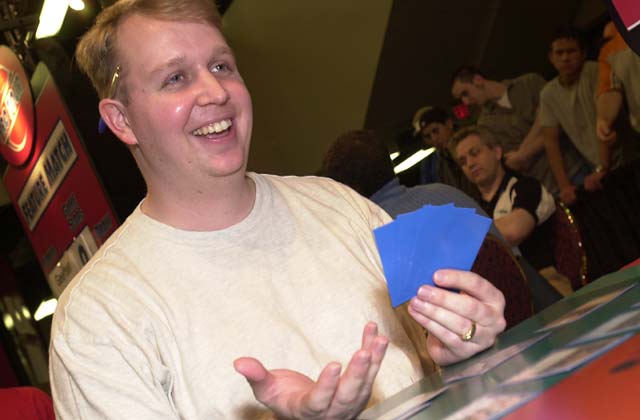 Johns played first this game, and started with a Tidal Visionary. Cornelissen then played an Irrigation Ditch. Johns attacked with the Visionary, and continued his curve with a Galina's Knight. On the following turn, Cornelissen analyzed the board position, and played a Prison Barricade without kicker. Johns made the Barricade Red with his Visionary, and the Galina's Knight came through for two damage. Cornelissen followed up by playing a Shoreline Raider to build up his defense.

Johns drew, and complained "My deck has a sense of humor." He played his fourth land, and a Dream Thrush which he had obviously just drawn. Cornelissen then played his fourth land and said go, with the game at a stalemate. Johns played his fifth land, and also had nothing to play. On the next upkeep, Johns' Thrush turned Cornelissen's only Island into a Swamp. Cornelissen drew, and cast Probe with kicker. At this point Johns started to comment that he had lost, and he could probably at least make Top 16. Johns discarded Dismantling Blow and Urborg Drake, and Cornelissen simply discarded two lands.

Johns then played a Vodalian Serpent with kicker, noting that it made up all his offense and had to go all the way. Cornelissen then played a Galina's Knight, and had no clear way to contain the Serpent. Johns untapped, and drew his only card. He attacked with the Serpent and dealt six damage. Dumbfounded, he commented, "I'm actually winning! You're five cards up on me but I'm winning!" At the end of that turn, Cornelissen Recoiled Johns' Tidal Visionary, making it obvious that he planned to Agonizing Demise the Serpent. Johns responded by making Cornelissen's only Swamp an Island, but Cornelissen responded by tapping it for Black mana. Once the stack resolved, the Serpent was buried due to Agonizing Demise, and the Visionary was gone due to Johns having no cards in his hand.

Cornelissen then attacked with his Shoreline Raider and Galina's Knight. Johns blocked the Knight with his own, and traded. Johns drew and ended his turn, leaving him with one card in hand and nothing but a Dream Thrush out. On the next turn a bad situation for Johns became worse when Cornelissen played a Faerie Squadron with kicker. Johns untapped, and turned Cornelissen's Ditch into a Forest to play around Exclude. He then played a Benalish Lancer with kicker, which resolved.

Cornelissen then attacked with his Squadron, and increases his clock with Lotus Guardian. At this point in the game, Johns was at 13 life, and Cornelissen was at 9. On the following turn, Johns had the answer which gave him a chance to win the race. He turned Cornelissen's Island into a Swamp, and removed the Lotus Guardian with Agonizing Demise. Johns then attacked with his Lancer, which was chump blocked by a Prison Barricade. He increased his pressure with Spirit Waver, and ended the turn.

As Cornelissen took his turn, Johns said "Just once, play a land and say go like me." Cornelissen cast Worldly Council for three. He then attacked with Faerie Squadron and Shoreline Raider. The Squadron dealt three damage, and the Raider traded with Spirit Weaver. This brought Johns to 10 life points, while Cornelissen remained at 9. Cornelissen used Stand/Deliver to bounce Johns' Lancer, and ended his turn.

Johns was somewhat pessimistic towards the odds of his Lancer resolving. He said, "If you have Exclude, you're going to Exclude this. This isn't a bluff." The Thrush attacked for a point, and the Lancer resolved. Cornelissen continued his attack with the Squadron, and Johns counterattacked with Benalish Lancer and Dream Thrush. This brought Cornelissen to 3 life points, while Johns was at 7. Johns then played a second Thrush and a Stormscape Apprentice. On Cornelissen's turn things looked grim. He played a Tower Drake, and only had one card in his hand. The Stormscape Apprentice tapped the Drake on the following turn, and Cornelissen was forced to chump the Lancer with the Squadron. Johns then locked down Cornelissen's mana by using Thrushes to deprive him of Black mana. The game ended on the following turn.

Johns shuffled Cornelissen's deck, but decided to use a different method. He explained, "If I shuffle your deck like it's mine, you'll get a bunch of crap." Apparently his theory was right, and Cornelissen mulliganned his opening hand. He used the same pile shuffle again, stating "That worked well." Despite the mulligan, Cornelissen had a strong start with a first turn Stormscape Apprentice. Not to be outdone, Johns had his own first turn drop in Tidal Visionary. Cornelissen played an Irrigation Ditch, and ended his turn.

Johns attacked with the Visionary, which got through for a point of damage. He then played a Dream Thrush, commenting that he had yet another fattie. Cornelissen made an interesting play on the next turn when he sacrificed the Ditch to play Noble Panther. He didn't miss a land drop, but obviously had no Green mana sources. Johns attacked with the Thrush, and played a second one. On the next turn the Panther came through for three damage.

It was fairly obvious at this point that Johns needed a way to handle the Panther, or at least had to increase his own attack. He used his Thrush to take out Cornelissen's only Blue source, and played Urborg Drake. Johns was talking a severe amount of trash at this point, and made a comment which will no doubt be used as a quote of the week on many websites. "It's not about sportsmanship, it's about winning damn it!"

Cornelissen continued his attack with the Panther, and played a Razorfoot Griffin. Johns followed up strong on the next turn. He attacked with Urborg Drake, and played Benalish Trapper and Angelic Shield. Cornelissen was still able to deal some damage, with his Panther and Griffin coming through for five damage. On the next turn, a Stormscape Apprentice tapped down Johns' Drake. His attack phase was a form of dorky beatdown, as he attacked with two Thrushes and a Trapper. The Trapper was bounced with Stand/Deliver before damage went on the stack. Johns then played Swamp, and cast Probe with kicker when Cornelissen had only one card in his hand. Johns discarded Benalish Lancer and Vodalian Serpent, and Cornelissen discarded an Island. This was an obvious mistake by Johns. He could have bounced the Panther back to Cornelissen's hand with Angelic Shield, and Probe would have eliminated it.

Although he had no hand, Cornelissen still had threats Johns could not deal with. The Griffin and Panther were both unblocked, and Cornelissen cast Worldly Council for two. Johns took a long time on his next turn, leaving five minutes left on the clock when he finally started doing things. He attacked with Drake and a Trapper, and played Stormscape Apprentice and Tower Drake. At the end of the turn, Cornelissen tapped down Johns' Dream Thrush. 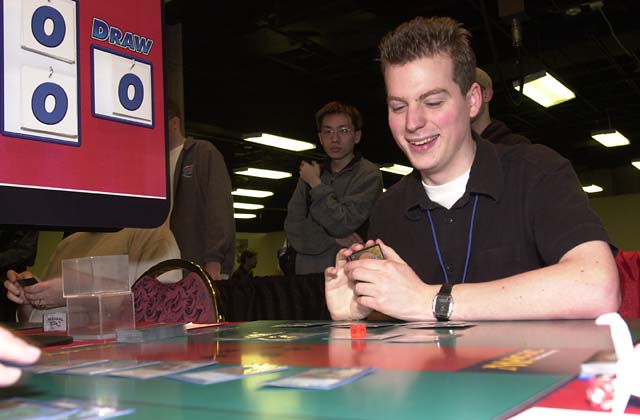 Cornelissen's Panther was tapped during his attack step, and his Galina's Knight and Razorfoot Griffin attacked. At this point, time was called. Johns blocked the Knight with both Thrushes, and bounced the Griffin with the Angelic Shield. The Thrushes turned both of Cornelissen's Plains into Islands during combat, so the Griffin could not be cast again that turn. Johns then attacked with his Urborg Drake, bringing Cornelissen down to six life points. His Trapper was tapped at the end of the turn by Cornelissen's Apprentice. On the following turn, Johns' Apprentice tapped down the Panther, and Cornelissen replayed his Griffin.

Johns then attacked with his Griffin, bringing Cornelissen down to four life points. At the end of his turn, Cornelissen tapped down Johns' Trapper at the end of the turn, and was able to get through for two damage with his Griffin to win the match. Johns immediately commented that he deserved to lose the match due to his mistake with the Probe and Angelic Shield. He said, "If I make a mistake like that, I deserve to not make Top 8."