"Howdy, I'm Jon," smiled Jon Finkel as he approached the feature match area to play against Shouta Yasooka of Japan. Yasooka beamed back, and introduced himself with a handshake. It was a comparatively lo-fi meeting considering that Finkel is one of the consensus best players ever to have played Magic, and Yasooka is a former Player of the Year himself, known for playing innovative control decks at the very highest level, something he had been doing throughout this Pro Tour. 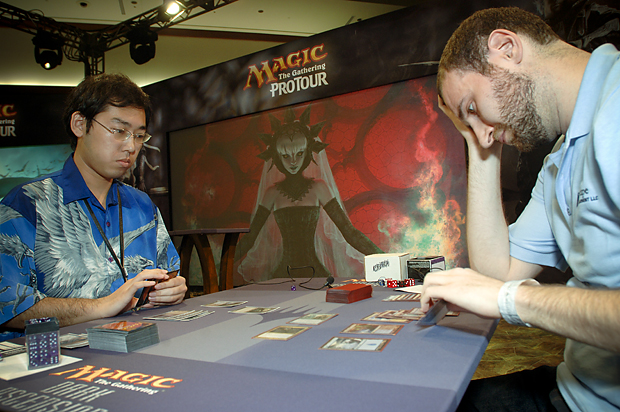 Finkel looked on as Yasooka rolled an 11 on two dice. He picked them up and rolled a 12 for himself, electing to play. He led off with Gitaxian Probe seeing two copies of Ratchet Bomb, Darkslick Shores, Swamp, Doom Blade, Spellskite, and Bloodline Keeper. Yasooka's hand looked solid, but possibly less so now that Finkel had full information on it.

The next play of the game was the same Gitaxian Probe, thanks to a Snapcaster Mage that was offed by Doom Blade. A Drogskol Captain came from Finkel, but it too fell, this time to Liliana of the Veil. Finkel remained unperturbed. He sniffed and cast another Drogskol Captain, and seemed satisfied when all Yasooka had for his own turn was Spellskite and Ratchet Bomb. Tellingly, Yasooka had not used Liliana Vess to force a discard. It would not help keep the planeswalker alive, and the Japanese Pro clearly valued an extra card in his hand more than an extra card for Finkel.

Finkel cast a Phantasmal Image to get another Drogskol Captain, and Divine Offering to take out Spellskite, before attacking Liliana Vess to finish her off. Yasooka simply kept playing land, and went for it with Bloodline Keeper. There was a Vapor Snag for the big vampire, and Revoke Existence to ensure that Ratchet Bomb did not pose an undue threat. 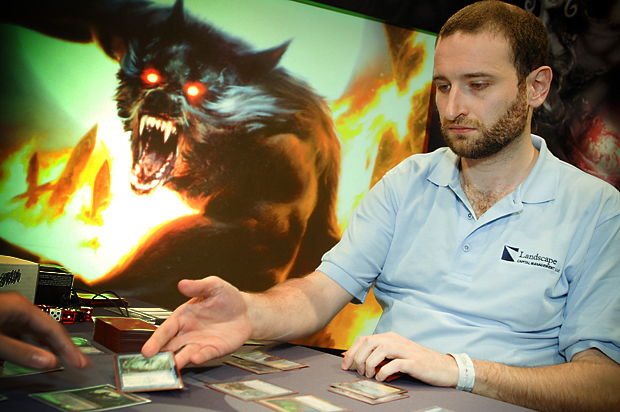 Finkel, calmly and casually ridding himself of all the things.

Finkel was out of cards by the time that Bloodline Keeper came out a second time, and the Hall of Famer still had 11 damage to deal. He attacked Yasooka to 6, knowing that the former Player of the Year would not want to lose his Bloodline Keeper by blocking. While Yasooka had a Wurmcoil Engine to potentially gain back all the life that two Drogskol Captains could deal, a Moorland Haunt spirit at end of turn meant that Finkel had just enough power to be able to race both of Yasooka's powerful rares before they could take control of the game.

Yasooka was in the play for the second game, and he used a Despise to take a Delver of Secrets from Finkel's hand. He had a Go for the Throat ready for a second one, and a Spellskite to follow up. Lingering Souls from Finkel made a couple of Spirit tokens, and Yasooka passed without a fourth land drop, which must have felt good for Finkel. Yasooka had just one Swamp and two Islands, meaning he could not do anything of substance as Finkel flashed back Lingering Souls and built up a force, along with a Divine Offering on Spellskite. 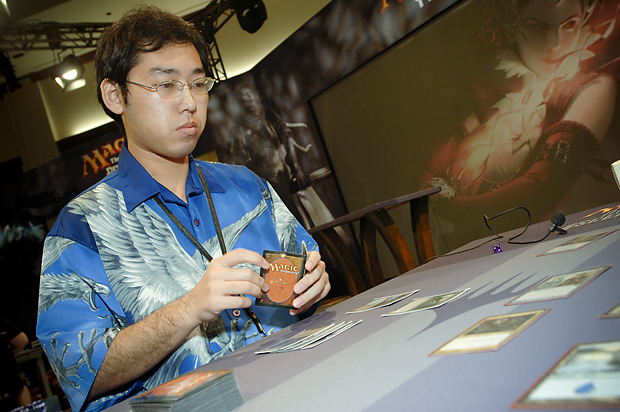 Yasooka's control deck struggles to cough up the lands he needs.

Drogskol Captain meant that Yasooka dropped to 10 on attacks. He knocked on his deck, looking for a Swamp to be able to cast Black Sun's Zenith, but only found Phantasmal Image to copy the captain. When Finkel had another Drogskol Captain the next turn, it was all over at lightning speed.

3 Liliana of the Veil 3 Tezzeret, Agent of Bolas