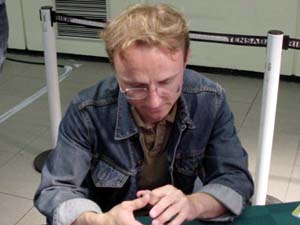 is twenty-nine years old and lives in Paris while Julien is only fifteen and comes from the Netherlands. Marc has been to a couple of limited Pro Tours and was already 8-0 in GP London with Goblins before having a bad day two. Julien has got a single PT point lifetime that he earned recently in the Team GP in Bochum. They are both playting this round to clinch top 8 and are both at the head of an army of little green men.

Julien wins the die roll and elects to play first keeping his hand but Marc chooses to paris after thinking for a while. He keeps his six card hand and Julien has no first turn play while Marc drops a Sledder. Julien imprints a Clickslither on his Mox and casts a Warchief on his second turn but Marc topdecks a Gempalm Incinerator which he quickly cycles to kill the Warchief. Julien then casts a Sharpshooter which Marc has no answer for as he can only drop a third land, a Piledriver and say go. Julien has three cards in hand but no fourth land to go with his Mox and just says go with a Sledder and his Shooter on board against Marc's Piledriver. Julien's deck doesn't deliver a land yet but a Clickslither instead which gets in for three damage along with the Sledder as Marc's lives go down to thirteen while Julien is at twelve thanks to a Goblin Burrow pumping up the Driver every turn. Marc can't cast his Siege-Gang cause of the Shooter and just swings again but Julien finally draws a land and Marc scoops when Julien casts his own Siege-Gang.

Both players keep their opening hand this time and Marc has only a turn two Skirk Prospector while Julien gets out a Sledder and a Prospector in the meantime. Marc just lays a Burrow and says go on turn three and Julien sends his two 1/1's in. Marc blocks and Julien chose to save the Prospector and plays a Sharpshooter. Marc plays a Clickslither and swings but Julien has his own Clickslither and Marc goes down to fifteen. Marc is once again in trouble as he has no way to deal with the Shooter and is more or less stuck with his Siege-Gang and his Warchief in hand. He finally decides to cast the Warchief and swing with both creatures taking down Julien's life total down to twelve. Its Julien's turn to start thinking for a while and after a minute or two, he decides to sac his Prospector, killing Warchief in the process, play a land, cast a Sparksmith and a second Clickslither swinging with both Insects bringing Marc down to nine. Marc plays a Siege-Gang on his sixth turn but after a sends the Clickslither in. In the end, he's only able to deal 10 damage and extends his hand in concession. 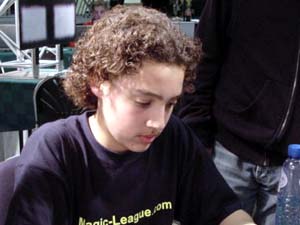 Marc's sideboard plan didn't seem too hot and he agreed he maybe should have left in all the burn and played a more controlish game rather then keep in all the small guys. He now has lost his last two rounds when he only needed a win to be able to ID into top 8 and can probably only finish top 16 at best now, while Julien only has to get a pairing that allows him to draw to make top 8.