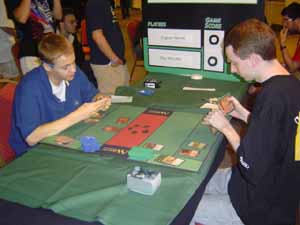 Former National Champ Eugene Harvey never looks like he’s having a good time, not even when he’s winning. A model of concentration, he never so much as cracks a smile. This weekend he’s playing Slide, and needs to win out to make Top 8, thanks to an unintentional draw. His opponent is former JSS’er Max McGuffin, who is running an atypical Goblins build that boasts Bloodstained Mires to enable Cover of Darkness out of the sideboard.

McGuffin won the roll and kicked off with Prospector and Sledder. Harvey cycled twice and accepted the beats. McGuffin’s third turn was not explosive, which was good news for Harvey. He merely hit for two and added a Piledriver. However, Harvey had nothing to do on his third turn but make an Astral Slide, so he fell to ten.

It looked like it would be enough, since McGuffin still couldn’t find a third land. His crew came in again, and this time a cycled Decree of Justice stranded the Piledriver and made a token to block the Sledder. McGuffin sacrificed it to put Harvey at eight. After that he hand no play. Gempalm Incinerator took care of the Prospector, and McGuffin found his third mountain just in time to see Harvey play an Exalted Angel. Threaten put Harvey to five, but then his Angel was working. A second one (though face-down) ensured victory. 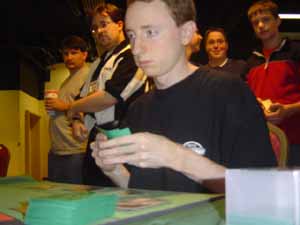 After extensive shuffling, they were ready for game two. McGuffin got in with Goblin Piledriver, but Harvey had the Silver Knight on turn two to stop it in its tracks. McGuffin went a different route, busting out Sulfuric Vortex. Harvey swung in with his Knight and fronted Wing Shards. McGuffin looked at his Goblin Warchief and agonized. He cast it, but held back, passing the turn to Harvey, who Carbonized the Warchief.

He untapped and plainscycled Eternal Dragon to get his fourth land, sitting behind his Silver Knight. McGuffin made a Clickslither and charged with both men. Harvey blocked the insect, and McGuffin sacrificed his Piledriver to trample over, leaving Harvey at eleven after his Vortex damage. McGuffin was sitting at thirteen. Harvey hit back with his Knight and played a Forgotten Cave. He had four mana open.

McGuffin played a Sledder and bashed in, sacrificing it for damage. This time, Harvey had the Wing Shards. Now Harvey was way ahead in the race. A cycled Decree of Justice made sure he’d kill McGuffin well in advance of the Vortex.