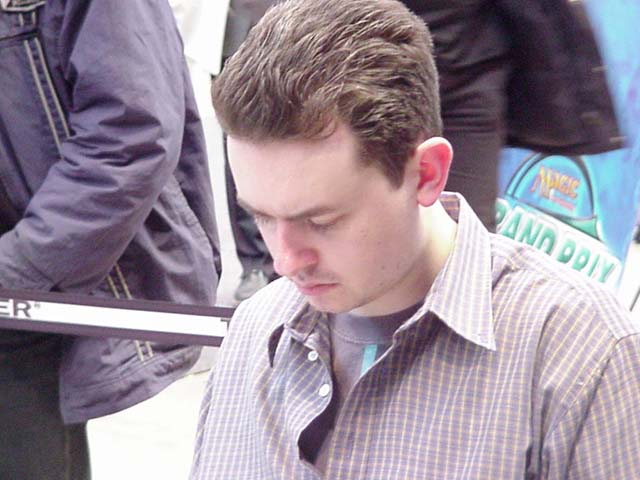 The winner of this match would probably make the Top 8, and both players had to like their chances. Scott had a really strong green/white deck with a splash of red, and Mikael had an unbelievable black/white/blue deck. They both had several creatures that can allow them to get a real jump on their opponent. Scott's deck had two Benalish Trappers, and a Thornscape Apprentice. Combine these with his quick creature base, and Mikael could take a lot of early damage. Mikael had two Benalish Heralds, which, if left unanswered, would give him enough card advantage to beat just about anything.

Mikael mulliganed a six land hand going second. His next hand contained a land of each of his three colours, plus an Opt. Scott started off with a turn two Nomadic Elf. Mikael answered with a Samite Pilgrim, then a Benalish Lancer. With not much to do on the fourth turn, Mikael attacked with the Benalish Lancer and held the Pilgrim back on defence. He blocked the Nomadic Elf, and Scott used his Gerrards Command to give it +3/+3. Mikael used an Agonizing Demise to kill it.

At the time, this appeared as if it might be a turning point, as Mikael had a grip full of strong creatures. He played a Faerie Squadron, and was probably feeling as though he had the upper hand. Scott used his Sunscape Battlemage to kill the Faerie Squadron. Strong creature after strong creature was played in the following turns. Mikael played another Benalish Lancer, this time paying the kicker. Scott answered with a Kavu Climber and the ever important Thornscape Apprentice.

Both players filled the playing area with creatures, no one getting any significant damage in. Scott realized that since he was facing Ertai, The Corrupted, two Benalish Heralds and Atalya, Samite Healer (among many other creatures) there would be no chance of killing his opponent. Realizing this before Mikael did was important, as he never thought twice about using his Benalish Heralds. When he finally realized he was going to be decked, he conceded with seventeen minutes left in the round, and six cards left in his deck.

With so little time left to win two games, Mikael needed to change his approach to the match. His deck was good for the long game, but cards like Benalish Heralds become less powerful when you have to kill in eight minutes. Scott ponders sideboarding in Winnow, and to my surprise doesn't despite his opponents three Benalish Lancers and two Benalish Heralds. Leaving in a Pollen Remedy instead. 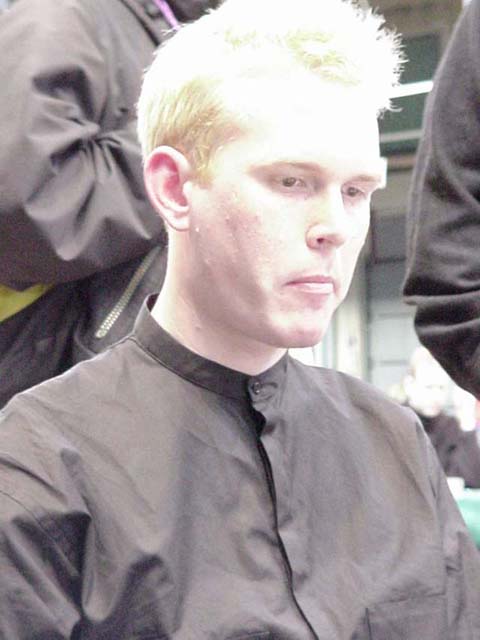 Although Scott was going second, he came out of the gates fast. He played a first turn Sunscape Apprentice and a second turn Benalish Trapper. Mikael's first creature was a Tower Drake. On Scott's third turn, he played a Rith's Grove, a Fertile Ground, and dropped a Nomadic Elf. This fiery start was quickily extinguished by a Benalish Herald. The next creature to see some game time was Scott's largest, Jade Leech. Mikael had all the answers this game, and cast Slay on it. The ground locked up almost instantly, and the match turned into an aerial battle. Mikael played a Faerie Squadron and a Dream Thrush, and Scott played a Thornscape Apprentice and a Voice of All, choosing blue.

Mikael was having trouble finding land, and his hand was really starting to back up. With five minutes left, a draw was all he could achieve, and that's only if he won. Scott's mission was now to stay alive. The life totals were 7-5 in Scott's favour, and things had come down to the wire. Mikael had been using his Heralds and had a significant creature advantage.

Time was called, and things looked like they were about to get ugly for Scott. He had drawn a fair amount of spells, but Mikael drawing two cards a turn had become a problem. Mikael decided not to attack on the second extra turn, although it might have been his best chance to win. He opted to give Scott one more draw phase. Scott used this to the fullest, and peeled an Armadillo Cloak off of the top. Scott tapped Ertai, cloaked up his Kavu Climber, and served. Mikael decided that his only way to win was to hope that Scott wasn't holding a Gerrard's Command, and blocked with a Vodalian Zombie. Well, guess what?