For one player the tournament was over, and for the other, there was the chance to become the Grand Prix Atlanta Champion. Mike had been piloting his deck to two successive victories, but didn't seem that hopeful at winning this matchup. 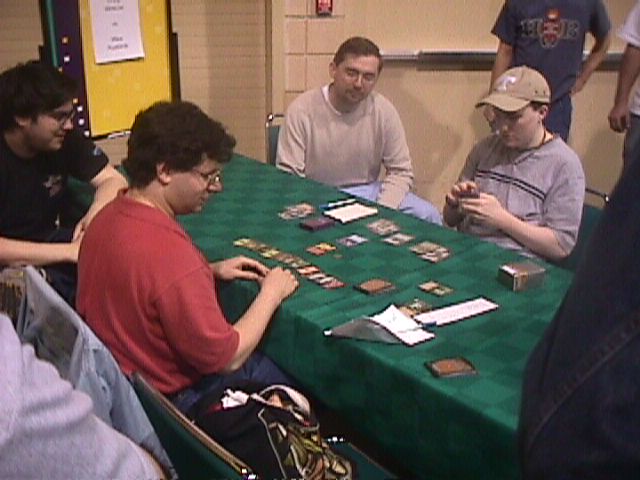 Mike Pustilnik vs. Craig WescoeMike went first. Wescoe joked, "I don't know if I can keep up," as Mike summoned his first spell on turn 4, the Pardic Firecat. A turn five Diligent Farmhand added to the beats, and at the end of Wescoe's next turn Mike used Elephant Ambush. After adding Seton's Desire to his Firecat, he was able to attack for 5. Wescoe's Aven Windreader traded with the elephant token.

Wescoe said, "This is not a stellar draw," as he looked down at 6 lands in play.

After a Repel, Mike was left with nothing but lands in play, with life 20 to 11 in Mike's favor. When Mike said, "Go," Wescoe gave a little smile and said, "Yes!" as both players looked at a table full of land and nothing else.

Wescoe stared and stared at his hand, and then finally used Zombify to remake the Windreader. Elephant Ambush was flashed by Mike, and Mike dropped his token onto the flier during the next attack phase, seeing if Wescoe would trade again. "Attack?" said Mike. Wescoe replied, "Nope," taking three instead of blocking. Mike then made a Pardic Firecat. Wescoe said, "After?" with a raised eyebrow. Mike said, "He wasn't attacking." On his turn, Wescoe gleefully said, "Morbid Hunger the token, does that make you sad?"

The life scores stood at 20 to 9 with a Pardic Firecat looking across the table at Wescoe's Windreader. Wescoe used the Windreader the next two turns to look at Mike's next card, and revealed two lands on each of the two turns.

Buyback Morbid Hunger killed the Firecat. There were about 15 spectators, and they chuckled as the flier revealed yet another forest on top of Mike's library. 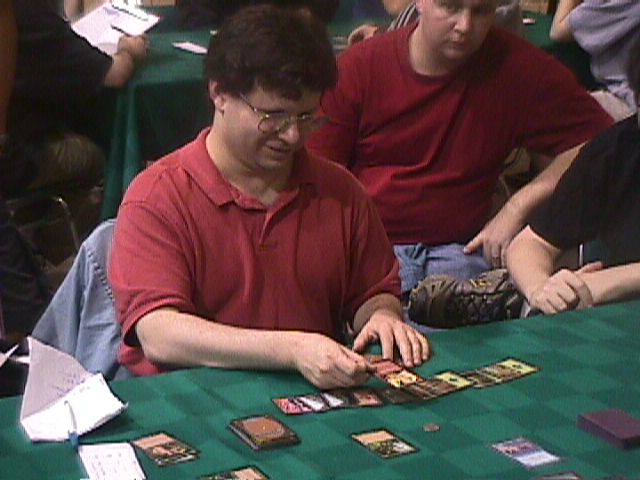 Mike PustilnikWescoe said, "That card's pretty good too," as he slapped down a Scrivener and returned Repel. "Take five," said Wescoe. Life totals stood at 12 to 6 now, and a Psychatog came down. Mike's Leaf Dancer met Repel. Mike said, "I think you should look again," as the Leaf Dancer once again was on top of the library. Just to be sure, Wescoe used the Aven Windreader once again to look at the Repelled Leaf Dancer and giggled. At this point, Wescoe had a little army while Mike had just the Leaf Dancer, but the use of a Moment's Peace bought Mike a turn.

Four creatures came down to say hello, and when the Moment's Peace was countered by Syncopate that was the game.

Wescoe sided out the Whispering Shade, the swampwalker not being as good when the opponent plays only Forest and Mountains.

Mike said to Zvi watching nearby, "I kept 6 land and Elephant Ambush. You're going to laugh at me."

Zvi replied to his fellow New Yorker, "No, I'm going to yell at you."

Mike played for game two. A Lyrist traded with a 1/1 flier, the Cephalid Scout. Then Werebear came out, not as useful on turn 4 as on turn 2.

Wescoe missed the turn three land drop. That could have been the game right there, but on turn 4 Wescoe played land three and was back in the game, as he cast a Looter. Mike's deck was simply not fast enough to punish someone with a mana hiccup.

Wescoe traded the Looter for the Werebear, as Wescoe had Peeked and saw the Rites of Initiation and wanted to minimize the damage to himself. He was at 12 life. The next turn he cast a Pyschatog a nearly invulnerable creature against a red/green deck. 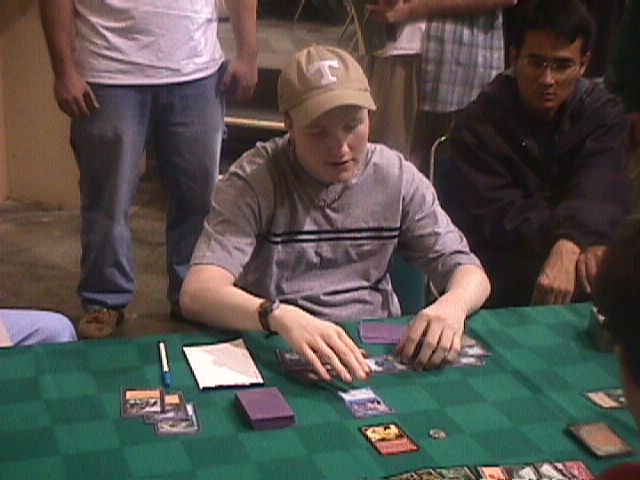 Craig WescoeMike put his hand on his forehead, and stared at the board, then grimaced. He was clearly unhappy to see the burly atog, but attacked anyway.

In the attack phase Wescoe said, "You have priority." Mike said, "Pass."

Apparently, unlike every other Magic player in the world, they are actually playing according to the rules.

Mike threw every egg he had in the basket and used Rites of Initiation for 3. Wescoe had to hold his forehead as he did the math and then let the Atog die, and went down to 7.

"This guy seems pretty good right now," Wescoe said on his next turn as he lay a Stalking Bloodsucker. "I don't know if I do, but I think I have card advantage," Wescoe joked.

Wescoe attacked. With a Stalking Bloodsucker in play the game would not last much longer. "I choose and discard, right?" Wescoe asked as he tapped 2 mana.

Repel sent Mike's creature back on top. It was then 8 to 7 in Mike's favor.

A turn later, Wescoe was able to attack for the win and finish off Mike effortlessly.

"Congratulations. My deck is so bad," Mike said and extended the hand. Wescoe replied, "My deck is pretty good." Mike concurred. "I agree," he said and chuckled.