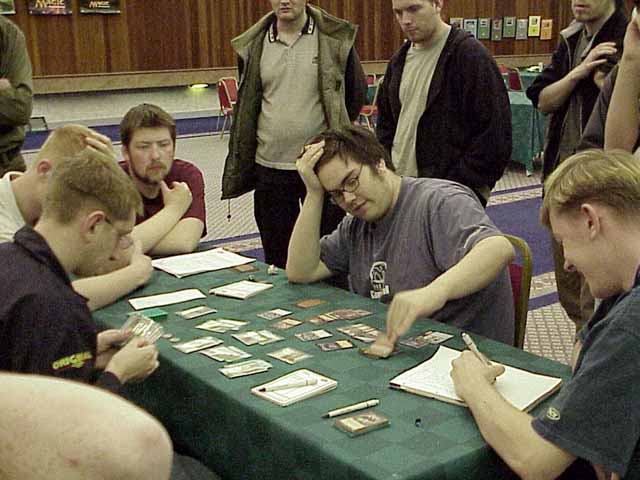 This is the final round of the Swiss portion of Grand Prix Manchester, and Neil Rigby needed to win this match to make it through to the top eight. Zvi Mowshowitz had a good chance of making it through regardless of the result.

Neil had a three-colour deck, which seemed to be mainly white/blue, with a splash of green for cards such as a pair of Armadillo Cloaks. Zvi's deck is black/blue quite a lot of flying or evasion creatures, such as Tower Drake, and Duskwalker, but not so much removal.

Zvi won the die roll and decided to go first, playing out a Tower Drake on turn three. Neil attacked on his turn three with a Llanowar Knight, and when Zvi blocked, Rigby used an Aggressive Urge to kill the Tower Drake and gain card advantage. Neil played out a Stormscape Apprentice to control the board, which helped to hold off Zvi's Trench Wurm and Faerie Squadron. Nevertheless, Zvi was still getting through with three damage a turn, with Neil racing him by enchanting the Llanowar Knight with a Traveller's Cloak.

Neil managed to get out a Benalish Heralds, though, and enchanted that with a Wings of Hope, allowing him to hold off Zvi's dangerous looking horde of flyers - two Tower Drakes, and a Faerie Squadron. The Llanowar Knight gradually reduced Zvi to only ten life,so Zvi decided to attack with his flyers, losing the Faerie Squadron but reducing Neil to eight.

Rigby effectively ended the game on his next turn, however, when he cast an Ordered Migration to bring three 1/1 Birds into play. He followed it up the next turn with an Angel of Mercy, and Zvi was forced to concede to the unblockable Llanowar Knight.

Zvi's start was great in the second game, as he played an Urborg Drake, and an Urborg Phantom. Neil's draw of Dream Thrush, and Benalish Trapper seemed to be too slow, but he did manage to play a Rainbow Crow on his fourth turn, after he was brought down to eleven life.

Zvi played an Urborg Skeleton, and a Vodalian Zombie, but Neil had a great play for his next turn. He used the Dream Thrush to turn one of his Islands into a Forest, allowing him to cast Armadillo Cloak on his Rainbow Crow. The Crow's ability would make it difficult for Zvi to deal with it, as Neil could make it black in response to a lot of Zvi's removal.

Neil amazingly made exactly the same play on his following turn, playing another Armadillo Cloak. This meant that Neil was gaining twelve lives a turn, and the Crow had trample so that Zvi couldn't simply block it. Neil played a Traveler's Cloak on the Crow on the final turn of the game, and attacked for kill.

Although it was a close-run thing, both of these players made top eight, with Zvi in eighth and Neil in seventh.