After twelve rounds, three players stood safe at thirty-one points. These two were not among them. No, Nick Cher and Kelvin Hoon were under the gun at twenty-nine and thirty points respectively, forced to win their last round for a space in the Top 8. Both sported tempo decks, but Hoon's was blue-white-red, while Cher's was the more traditional Price-style green-blue-red. 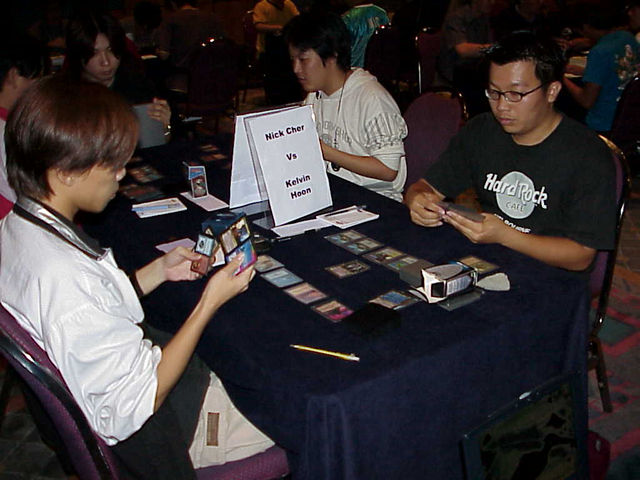 Cher earned the right to go first, and found his opening hand acceptable. Not so for Hoon, who was forced to mulligan. He frowned at his next hand, but decided to keep.

Cher was quick off the mark with Kavu Titan and Mongoose while Hoon struggled with twin Coastal Towers. Hoon missed his third land drop, but managed a Meddling Mage to stop Repulse. Urza's Rage got it out of the way. Hoon found a third land, and Repulsed the Titan to save him some pain and to get closer to a third land.

Hoon's Repulse came back to haunt him when the Titan was recast as a 5/5. He made a Legionnaire, which took down the Mongoose and saved him two life. However, a second Titan came down in short order.

Next door, Lance Yeong couldn't help but laugh at Cher's fortune, pointing at the twin 5/5's that were making short work of Hoon. Hoon made a Galina's Knight and Iced one of the Titans, but it was a losing battle. He chumped, and fell to five. Prophetic Bolt knocked him to one. He tried to Repulse into a fifth land for Ice, but it was not to be. He scooped.

Hoon was first on the table in game two with Galina's Knight, which Cher matched with Kavu Titan. It was Repulsed on Hoon's next turn to force through damage. Cher looked at his lack of excess land, and decided to replay his Titan rather than wait on his Exclude. He was repayed by a Lightning Angel that swooped in for damage.

Cher thought for a moment, then pushed his Titan in the way of the Knight. He untapped and was given a fourth land. This he used to Jilt the Angel out of the way. Hoon baited him with Meddling Mage, and Cher played Gainsay. With only three mana left, Hoon dropped Lashknife Barrier, which Cher had to read. Twice.

Realizing just how bad it was for him, he made a Gaea's Skyfolk and kept up Exclude mana, having drawing Shivan Reef. Hoon untapped and played Ice, locking down an island and clearing the way for his Angel. Behind the Barrier, it was safe from Prophetic Bolt and Flametongue Kavu, and so was an almost unbeatable threat. 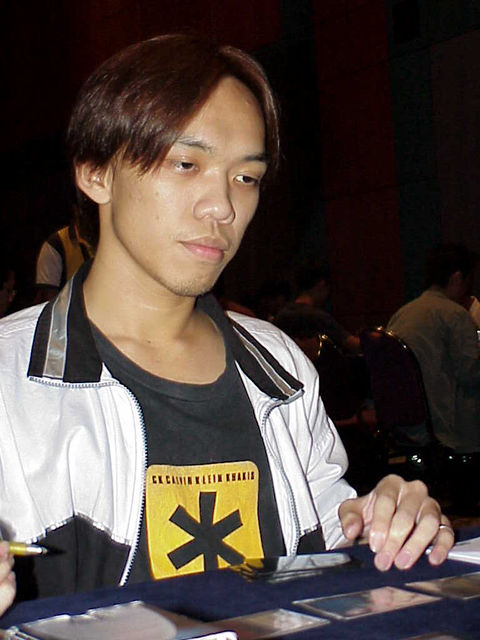 Cher added a Blurred Mongoose to his team, and threw his Skyfolk in the way of the Angel. His next play of a kicked Kavu Titan could manhandle the Angel, but Hoon was at a high enough life total that he could ignore it for a few turns. One was all he needed, as he tapped five for Prophetic Bolt to take the game.

Going first gave Cher the edge in the deciding game. He had no play on turn two, holding out to Ice Hoon's lone island on his turn. Hoon turned the tables with Disrupt. He kept up his cantrips, Icing Cher's forest and playing Lashknife Barrier, but was facing an unkicked Titan without red mana.

For three turns, the Titan attacked unopposed, both players afraid to make a move. Finally, Hoon found Shivan Reef. He Repulsed the Titan on its next attack. Cher tried to steal his card with a Repulse of his own. It resolved. He then made a Mongoose and passed the turn.

Hoon Iced at end of turn to keep Cher off Gainsay mana. Down came the absolutely brutal Lightning Angel, along with a second Lashknife Barrier. It hardly seemed to matter, what with Cher having no red mana of his own. Cher kicked up a Titan and passed the turn back.

Again Hoon used Ice to smooth the way, this time for Repulse on the Titan and a Meddling Mage to stop Repulse. Cher's Shivan Oasis came too late. He added a second Mongoose and the unkicked Titan. Another hit put him to eight.

Cher was backed into a corner. With time running out, his Prophetic Bolt on Pikula met a Gainsay. He bought a turn with Ice on the Angel, and used Urza's Rage to drop Hoon to nine. A second Rage put Hoon at six, but now all his creatures had gone to the graveyard keeping him alive. He got one last draw phase to try for a Prophetic Bolt and the chance at the win. It didn't turn up, and he extended the hand.