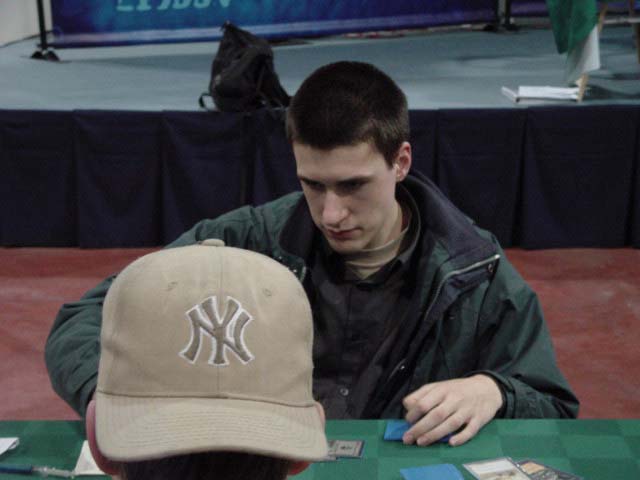 In this Dutch derby a lot of glory was at stake,:the winner was going to make Top 8 and the loser would probably hear about the match for a long time.

Jelger won the coin flip and elected to go first. Noah played a second turn Nomadic Elf and Jelger responded with a third turn Benalish Trapper. With the help of Nomadic Elf Noah played a third turn Shivan Zombie and attacked to put some pressure on Jelger. Jelger's Razorfoot Griffin was Assaulted by Noah and he took some more damage. Jelger chose to play probe with kicker to gain some card advantage but Noah's discarded land and Zap compared to Jelger's discarded Glimmering Angel and a Phyrexian Slayer wasn't that good. Noah attacked Jelger down to 10 and played a Vicious Kavu. Jelger had a good answer in hobble and played Trapper number two. Noah attacked with the Shivan Zombie putting Jelger at 8 and played Lava Zombie freeing his Vicious Kavu. Jelger played a Silver Drake returning a Trapper keeping four mana untapped. Noah attacked with the Shivan Zombie and Jelger went down to 6. Noah elected to play around Exclude which Jelger had in his hand and Jelger played Duskwalker (with kicker). After excluding Noah's Vicious Kavu the next turn Jelger played his trapper and 2 Dream Thrushes. Noah answered with a Caldera Kavu and a Thornscape Familiar. Jelger attacked with the two Dream Thrushes and played his third. Noah played a hooded Kavu and with fragile board control Jelger sent his three Dream Thrushes in to nibble on Noah. An Angel of mercy joined the Air force and it seemed like positions had changed. Noah used a Shivan Emissary to kill the angel and attacked with everything. Jelger blocked the Shivan Zombie with his Duskwalker and took 5 damage going down to 4. Jelger attacked with one Dream Thrush keeping the other ones home for defense. Two turns later Noah drew a terminate and after Jelger tapped two creatures he destroyed Jelger's Duskwalker and attacked with everything, Jelger went down to one and wasn't able to find the miracle he needed with his last draw. 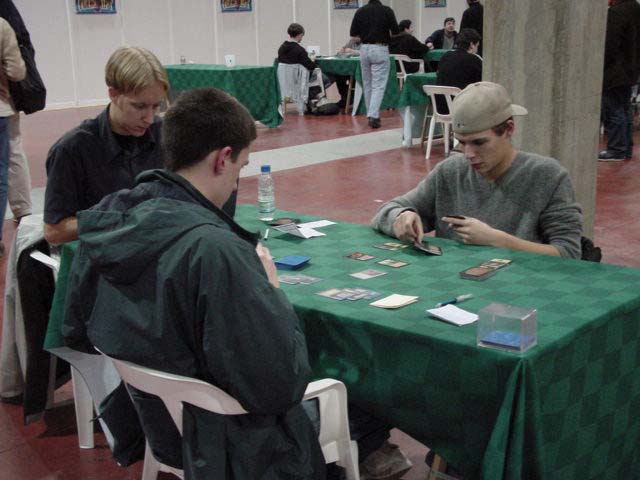 Noah brought in a Stun to break through Jelger's defense and Jelger didn't sideboard. Jelger kept a 6 land, Hobble draw and Noah kept his hand. Noah played a second turn Quirion Elves going for the missing black mana. He played a third turn Mirrorwood Treefolk which Jelger hobbled. Noah played Shivan Zombie and Caldera Kavu. Jelger responded with a second hobble on the Kavu and yet again Noah had a Lava Zombie to save one of his hobbled creatures. Noah replayed the Caldera Kavu and attacked Jelger down to 18. Jelger played a Duskwalker (with kicker). The Lava zombie and the Caldera Kavu attacked and the lava zombie traded with the Duskwalker. A Kavu Climber joined Noah's growing army. Jelger played an Ordered Migration and triple blocked the Shivan Zombie taking 5 going down to 11. Noah played his Vicious Kavu and a Battery token. Jelger seemed a bit bothered staring down at two 3/3s one 4/2 a Gray Ogre that pumps and his only defense was an ordered migration token. He probed without kicker in a last effort to find some answer but he could only find a Razorfoot Griffin that Noah killed with Agonizing Demise (with kicker). Noah attacked bringing Jelger to one. Jelger drew a card, scooped and congratulated Noah to his fourth GP top 8.