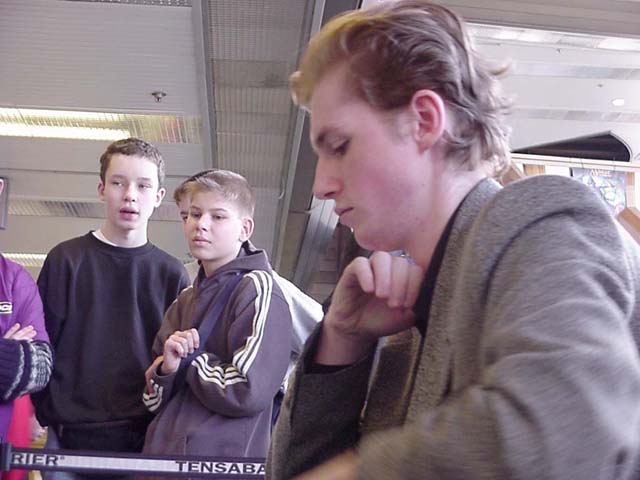 Konstantin Firsov and his fans

Olivier was on 10-2 going into this round, and a win would be enough to let him draw into the top eight, but Konstantin would need to win both of his last two matches to get in, as he only had nine wins and a draw so far.

Konstantin had drafted a pretty quick green-based deck, but his turn two play of Quirion Explorer was not as large as Olivier's of Llanowar Knight. He thought for a while on his third turn, as it was possible to put Armadillo Cloak on his Explorer or wait for something larger.

He decided to cast Quirion Sentinel and he put the Armadillo Cloak on that instead. Ruel also had an Armadillo Cloak for his Llanowar Knight, and the players traded hits that left them both on twenty.

Firsov had a Stone Kavu, but the Frenchman's Voice of All was rather more impressive. He gave it protection from Green, but despite this it didn't live very long - Konstantin played one of his two Keldon Necropolis' and threw a Quirion Explorer at it.

Olivier didn't have another creature to play, so he cast Allied Strategies and drew three cards. Despite all the life-gaining that was going on, Firsov was winning the damage race as he had an extra Stone Kavu. He summoned a Ruham Djinn that was 5/5 due to a preponderance of green permanents in play, and Olivier found himself unable to block it when it attacked next turn.

This reduced him down to nine life, a far from safe position with Keldon Necropolis on the table, and he felt the need to attack with his Llanowar Knight to try and gain some life. This wasn't that great though, as Konstantin blocked and traded it with his Stone Kavu. The Russian player did, however, forget to use his Necropolis to do an additional two damage to Olivier.

Ruel cast a Silver Drake, returning a Glimmering Angel to his hand, but still did not have any way of dealing with Ruham Djinn, which knocked him back down to eight. Firsov played a Sparkcaster, gating itself just to deal an extra point of damage.

Glimmering Angel made a reappearance, but the Frenchman was so low on life now that he had to chump-block the Ruham Djinn with the Angel on Konstantin's next turn, and then conceded, as Firsov's horde of Ruham Djinn, Armadillo Cloaked Quirion Sentinel, Raging Kavu and Sparkcaster was too much for a Silver Drake to handle.

Despite going second it was Konstantin who made the first threat, and his second turn Thornscape Familiar hit for a turn. He used its ability to good effect as he played a third turn Sparkcaster, returning the Familiar.

Olivier gained a little bit of safety with a Voice of All getting Protection from Red, and each player merely summoned a couple of creatures each over the next turn.

Firsov had the Familiar again and a Yavimaya Barbarian, whereas Olivier had Stormscape Apprentice and Pincer Spider. Konstantin was without a Plains to play the Armadillo Cloak and other goodies in his hand, so all he could do was cast Alpha Kavu and lay Keldon Necropolis while Ruel drew three cards from Allied Strategies.

Firsov did have access to one white mana, as Quirion Sentinel enabled him to play a 5/5 Ruham Djinn. Nevertheless, Ruel was in firm control here. He Hobbled Ruham Djinn, gave Voice of All a Wings of Hope, and had Allied Strategies again in hand - he had drafted three of them! He even had Wax/Wane in case Firsov had the Armadillo Cloak.

With no hope of getting past these defenses for a while, Konstantin passed the turn. Ruel built up more defense with Collective Restraint, and used Wax/Wane to save his Stormscape Apprentice from the Keldon Necropolis.

Olivier now played his second Allied Strategies, and used Stormscape Apprentice to lock down a newly cast Quirion Elves, which would give Firsov access to some much-needed white mana.

With all the card advantage he had, Olivier had no need for more, so perhaps it was just simple greed that caused him to cast a third Allied Strategies and draw four cards. His Voice of All gained protection from everything when he cast Sisay's Ingenuity on it, and the fact that his Stormscape Apprentice was finally killed by Keldon Necropolis seemed less than relevant.

Since a draw would knock Konstantin out of contention for top eight, he had to play quickly since it seemed almost inevitable that he would lose this game. He used Magma Burst and sacrificed his Necropolis, along with a Mountain, to take out Pincer Spider and Silver Drake. Sacrificing his Necropolis was sensible - it allowed him to play the second one languishing in his hand!

Olivier was still only attacking with Glimmering Angel, so the game looked like it was going to take a while, and it seemed as though the match was headed inevitably towards a draw, as they only had eleven minutes left at this point. Perhaps one of them could get a quick draw in the third game if one was necessary.

It was, Voice of All was Armadillo Cloaked, and Konstantin immediately picked up his cards.

The players perhaps did not sideboard and shuffle as quickly as they could, and the game began with only seven minutes left in the round. Firsov's opening draw of five lands and two Armadillo Cloaks was certainly not what he was looking for, and he had to take a mulligan. Even then he couldn't find a hand to keep, and went down to five.

The constant mulliganing was eating into the time left to play the match, and there were only five minutes left when they began.

Despite having only a five card hand, Firsov's start was as good as it could get - he played a second turn Nomadic Elf and gave it an Armadillo Cloak. After only a single hit from this Elf, the enchantment was Waned, and as Konstantin only had two lands and a Hull Breach in hand, he was on the defensive again. 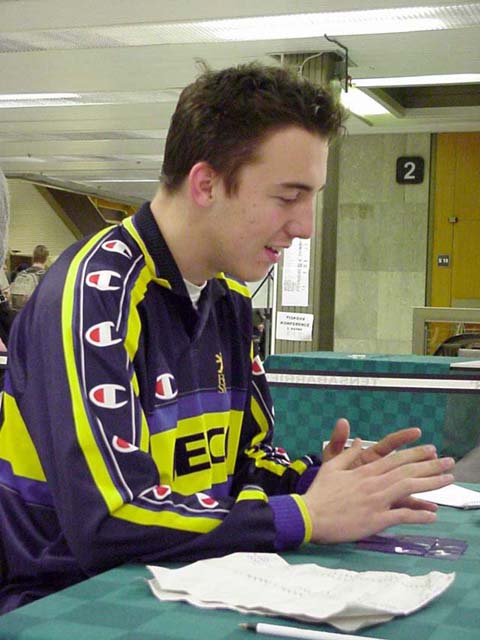 Olivier drew three cards from Allied Strategies and played a Benalish Heralds. Konstantin summoned a top-decked Ruham Djinn but it was only 3/3 in size, so it couldn't get past the Heralds.

Olivier's attacking was delayed for a while - he put Wings of Hope on his Crimson Acolyte, but it was Hull Breached. This was only a temporary setback, as he also had Glimmering Angel, and enchanted it with an Armadillo Cloak, knocking Konstantin down to ten when time was called, in the Frenchman's turn.

In serious trouble, Konstantin found the ideal way to try and survive the extra turns, when he put Armadillo Cloak on his Ruham Djinn and attacked for five. As Olivier couldn't afford to let him gain another five on his next turn, he Hobbled it.

Both players were now at fifteen, but the only creature that could really get through was Ruel's Glimmering Angel, although he could give any of his creatures Protection from Red to ensure they got past the Horned Kavu, which was one of Firsov's only two blockers with a Nomadic Elf.

Olivier wanted his white mana to play and Ancient Spider, and attacked with everyone anyway, losing Pincer Spider and putting Konstantin on nine.

Firsov did nothing on his turn, and Olivier was unable to get past with anything except the Glimmering Angel, so the match was drawn.