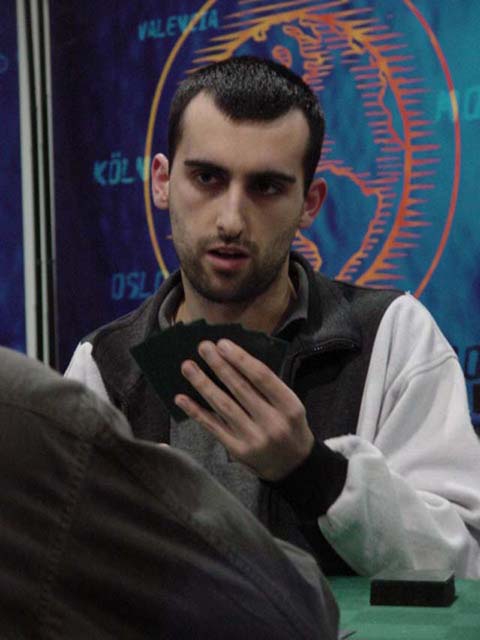 After a gruelling two days of Magic it all came down to this: the last Swiss round. With the top three tables drawing in, Laur and Faustino were fighting for one of the two remaining spots. Someone told me that Faustino has barely slept in the last two days, which doesn't seemed to be affecting him at all.

Manuel opened up with a Sunscape Apprentice and Pierre-Alain responded with a Phyrexian Battleflies which was immediately stopped by a Sleeping Potion. Laur then played a Obsidian Acolyte and they traded blows until Pierre-Alain released the flyer using the Acolyte ability.

The Frenchman found a bigger creature in his Sliver Drake while the Portuguese got himself a Rampart Elephant and a Tower Drake. The two Drakes completely ignored each other and attacked every turn. Laur used a Barrin's Spite targeting the Tower Drake and the Rampart Elephant. Faustino threw away the Elephant and replayed his Drake and a Obsidian Acolyte. The Drake got locked under a Shackles.

The air forces grew, with a Glimmering Angel on Laur's side and a Voice of All (with protection from white) in Faustino's side, but when Faustino tried to cast a Faerie Squadron (with kicker) Laur was ready with a Prohibit. What he could not stop was the Shackles locking down his Sliver Drake.

The Shackles looked set to dominate the game but Manuel was so tired of them that he played a Meddling Mage naming Shackles! He then bounced his Drake to get him away from the Shackles. The game stalled with both sets of flyers looking at each other.

The two players went into "draw-go" mode for a few turns until Faustino sent his Voice straight into the feathers of a Dream Thrush and a Tower Drake. Pierre-Alain pumped the Drake's defence but the Portuguese had a Explosive Growth ready to save his flyer. Later on he used a Rushing River (with kicker) to clean away the Laur's defence and attack.

The damage race was already to skewed for the Frenchman to make a comeback. He had some problems and was missing a crucial extra Plains. In the end Faustino's flyers finished the game.

Laur had to mulligan but he was the first to play a creature, a Prison Barricade. he then bounced it to play a Sliver Drake while Manuel played a Ardent Soldier and a Sunscape Apprentice. Pierre-Alain also got a Phyrexian Battleflies, which got immediately locked, a Obsidian Acolyte and a Dream Thrush.

Manuel decided it was time to add some creatures of his own so he got a Voice of All (protection from Black), Obsidian Acolyte of his own and a Meddling Mage naming Shackles. He where firmly locked in a creature stall so both players took the time to think things over.

While they looked for a way out the creatures kept piling in. Pierre-Alain replayed his Prison Barricade (with kicker) and Manuel got a Tower Drake. Suddenly they decided to move once again. Faustino sent in the Voice and the Drake with a little help from a Sunscape Apprentice pump and Laur responded with his own flying attack.

Then Manuel found a odd game-breaker: Rampart Elephant. Although he only had two green sources that Elephant could pull away enough blockers for fatal damage to sneak by. Pierre-Alain tried to gain some time by playing a Rushing River (with kicker) in the incoming flyers but Faustino had a Confound to keep them safe.

Finally the Elephant feels brave enough to lead the last charge. He pulls away two of the three remaining blockers and it seems to be the end of Laur's run. But the Frenchman wouldn't go down quietly and he plays his second Rushing River of the game to bounce the attacking Meddling Mage and the Shackles that has been keeping his Sliver Drake idle. This and a brave chump block from his Obsidian Acolyte allow him to survive... but just barely.

Faustino bounces the Elephant back to his library with the Sunscape Apprentice and replays the Shackles in the same target. At one, Pierre-Alain needed to draw something really good but all he got was another land.

The game went a bit sour at the end because Faustino was slightly nervous and anxious about making the top 8 while Pierre-Alain seemed to be taking huge thought pauses with no visible result. They both behave within the limits but you could feel that unmistakable tension of the last round.