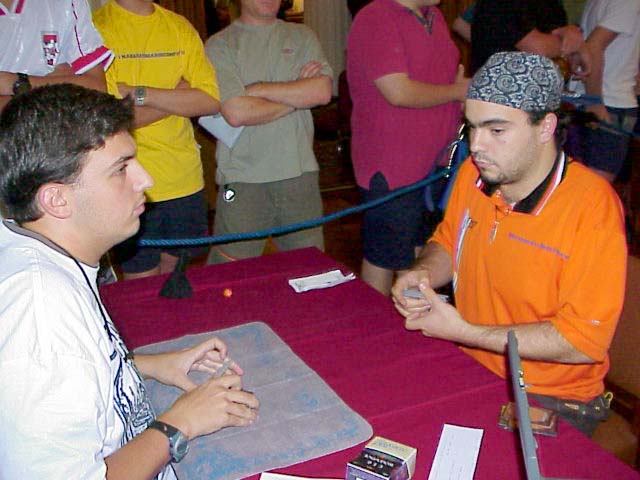 Brazilian Ricardo Barros is still running strong after 12 rounds of play. Unlike Damian he had no byes so he has been fighting from round one. The reward is now within reach: one more win and he will make it to the fabled Top 8. It's easy to see who the local crowd is rooting for in this battle. Damian is Uruguayan but flew in from New Zealand, where he now lives, to play in this tournament.

After a brief search for a die the game got underway. Ricardo opened with a Tidal Visionary and Damian matched him, playing one of his own. After some deliberation by Damian the Visionaries passed by each other for a few turns with Damian adding a Samite Pilgrim to the mix. Barros was stuck at two lands and the Damian set out to take advantage of the situation.

The Brazilian got a new creature, a mana-limiting Sapphire Leech, and Damian dropped a Glimmering Angel and an unkicked Ardent Soldier. Ricardo was forced to discard a Hunting Drake, still mana shy. Brown-Santirso kept swinging under the protection of the Pilgrim's ability, trading blows with the Leech while Barros kept discarding.

A Reckless Spite blew away Ricardo's two creatures sending him spiraling down towards a certain death. Despite drawing his first Plains and playing a Disciple of Kangee he couldn't stop the incoming horde and conceded during the next turn.

After a game decided by mana screw both players silently sideboarded under the piercing gaze of the huge crowd and carefully shuffled for a long time. Ricardo opened with a Sapphire Leech and a Sparring Golem while Damian played an Urborg Emissary without kicker.

They traded hits for a while until Ricardo played two Benalish Trappers in the same turn! One got bounced by the Blue half of a Stand/Deliver. Instead of replaying him Barros made a Benalish Heralds.

Unable to find useful spells and with mana problems Damian couldn't stop the incoming crowd, especially with the help of the tapper. He conceded before the final attack.

After two games decided by mana problems the shuffling was furious and long. Both players must have silently prayed to their respective deities hoping to get a good draw and a chance to show how good their decks were.

Damian pondered a mulligan for a long, silent period and the forbidden check of the top cards of the deck showed him me made the right decision. He came out fast with a Visionary and a Samite Pilgrim but the Brazilian had a Benalish Trapper. The New Zealand resident also dropped a Drake-Skull Cameo to smooth his mana curve. Ricardo was not to be outdone on artifacts: he played a Power Armor.

A Silver Drake came in on Barros' turn and a confusion followed about a timing situation. Damian's Visionary turned the Trapper Red and Barros had no choice but to bounce the Drake right back into his hand. Damian now had an Glimmering Angel has well and he swung with it hoping to keep the Drake back with the Visionary's ability.

Ricardo played a Phyrexian Slayer that Damian matched with a second Glimmering Angel. The Brazilian was in some trouble as the untouchable flying duo came flying in every turn under the watchful eye, and protection, of the Samite Pilgrim. All he could do was swing back with the Slayer, using the Armor to stay in the damage race.

The Slayer got bounced once by Deliver and was going to be replaced by a Stormscape Master but a sideboarded Gainsay put an abrupt end to that plan. Another flyer joined the fray on Damian's side: a Razorfoot Griffin. The Silver Drake finally made it into play when Damian attacked with the Visionary as well. The Drake brought company: the Slayer and the Benalish Trapper to stem the bleeding, both old friends that we'd already seen this game.

That didn't scare Damian and he sent all his flyers in before the Trapper could nullify his Samite Pilgrim. At eight life Ricardo had to carefully consider his blocks. The Drake stopped one of the Angels. It got protected by the Pilgrim. A Dismantling Blow took out the Power Armor and gave Damian two extra cards.

Barros dropped an extra creature, a Sunscape Familiar, but lost two to a Reckless Spite the next turn. The Drake and a confused Slayer (now Blue thanks to the Visionary) died during that key turn. That spelled the end for Ricardo who could no longer control his opponent's task force and conceded two turns later despite the best efforts of his Benalish Trapper.

Damian ran out to celebrate while Ricardo was left listening to the mistakes his friends said he had made but with the sure smile of someone who came a long way and made quite a few bucks. The whole experience is surely something to remember.