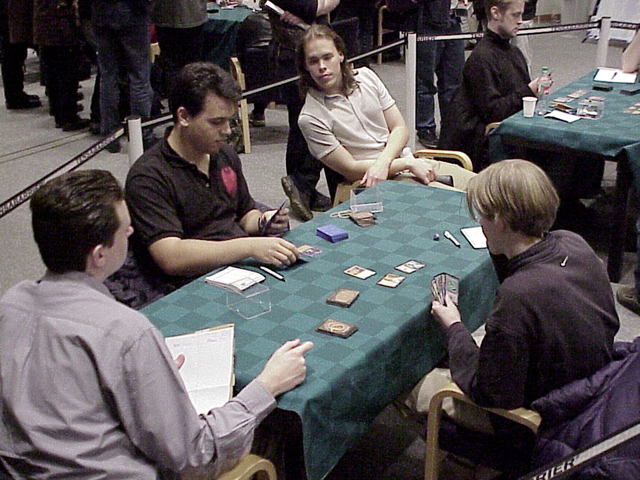 The pressure is on in the final swiss round of the tournament. Richard Osterberg (Sweden) and Jarno Harkonen (Finland) are battling over one of the top 8 slots. Osterberg is already qualified, but that makes him no less determined to fight for the high finish.

Harkonen's opening hand is good as it features a "combo" of Glimmering Angel and Armadillo Cloak - but no Island. Osterberg is also good to go with plenty of fliers in hand.

Harkonen mana-stalls at three, which prevents him from playing an Angel early. By the time he draws a fourth land and casts the combo, he is facing a Samite Archer, Phyrexian Slayer and Angel of Mercy. For a while, the Cloak saves the Finnish player, but he is unable to draw anymore land and his Angel cannot deal with either the Slayer or Angel of Mercy because of the Archer. Eventually the Slayer gets enchanted with Strength of Unity, making it even more of a threat. The game ends before he has a chance to recover.

Over the course of twenty or so turns, a huge stall is set up. Harkonen controls three Pincer Spiders (each cast with Kicker), a Zanam Djinn and a number of ground creatures. Osterberg has several fliers, including his own Zanam Dhinn, a Spirit Weaver and a kicked Benalish Lancer. He has exactly 16 points of damage on the table while his opponent is at 16. He decides to go for the win and casts Breaking Wave with kicker at the end of his opponent's turn. Harkonen thinks for a while and then responds by tapping his Quirion Elves for mana. Although he is forced to mana burn for one, he now has an untapped blocker, which means his opponent can no longer attack for the win. Osterberg does manage to attack for ten points of damage though and still leave enough blockers behind to discourage a retaliatory attack.

A few more turns pass but then Osterberg draws a Strengh of Unity. Cast on a 5/6 Djinn and combined with Spirit Weaver, it makes for a very difficult to deal with creature. He starts attacking every turn and forcing Harkonen to chump-block, rapidly losing creatures. Harkonen's only hope is to draw his Distorting Wake. He fails to draw it in time though and the giant flying monster comes in for the win.