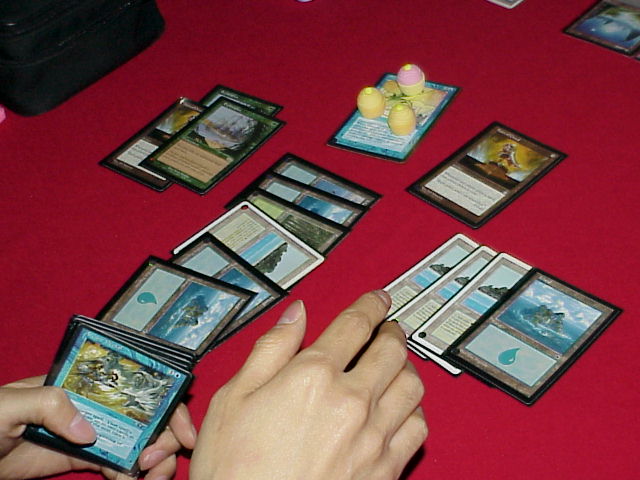 In the last of the Swiss rounds of Grand Prix-Sydney, Satoshi Nakamura and Michael Doecke faced off for a place in the top 8. The hat man from Japan was playing the amazing Turboland deck, utilizing the synergy between such cards as Horn of Greed, Exploration, Gush and Time Warp. Doecke, a former Australian National champion was playing Trix.

Nakamura opened with a mulligan and settled on his second hand of 6 cards. His first turn featured a land and an Exploration. Doecke began with a Demonic Consultation for a Necropotence, which he flipped over as the 8th card. Doecke played a Badlands as his second land, which was quickly wasted away, stopping the 3rd turn Necro. Satoshi continued to play land without casting any spells.

The next turn for Nakamura saw a Horn of Greed followed by a Gush (returning 2 lands) and then a Gaea's Blessing. In Nakamura's end step Doecke played another Consultation this time for Duress. In an amazing display of luck, Doecke turned over 2 Duresses in the top six to complement the third Duress already removed from play and still managed to flip over the 4th Duress as the 8th card. Doecke then used the Duress to strip a Gush from Nakamura's hand, the other possible card to take being a Time Warp.

Nakamura's next turn featured an interesting sequence of play. Nakamura attempted to play the Time Warp, but Doecke responded with Misdirection to have it target him instead. An Impulse is the best response Nakamura came up with, which resulted in no countermagic, so the Time Warp successfully targeted Doecke. 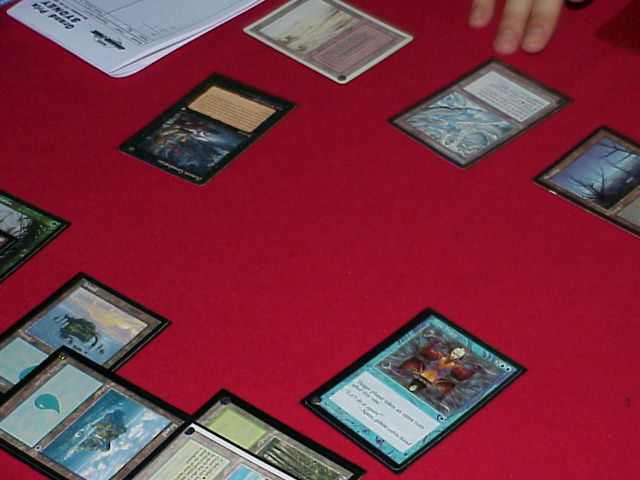 Doecke used his next turn to play an Illusions of Grandeur. Then on his Time Warp turn he cast Donate, giving the Illusions to Nakamura. Nakamura had plenty of land in play so easily paid the 4 mana upkeep on the Illusions. In the same turn he cast a Horn of Greed and used it with 2 land to draw 2 cards.

Nakamura still had an amazing amount of land on the table and once again paid the upkeep cost on the Illusions. He then started a huge amount of land-dropping and card-drawing which also included the casting of a Scroll Rack. With only 5 cards left in his library, and Nakamura having drawn plenty of cards and land Doecke decided it's time to go to game two and scoops.

Nakamura opened with an Exploration that was stopped by an Annul from Doecke. Doecke then went for a second turn Duress, using a Consult to find it. The Duress went unchallenged and left Doecke with a choice between 2 Annul, 1 Arcane Denial, 1 Capsize and 1 Gush. Doecke decided to take one of the Annuls. Doecke then played an Exploration followed by a Gush, casting it by returning his 2 land to his hand. Nakamura finished his turn with an Island land drop.

Doecke went for the Necro on his next turn, which was met by the Annul still in Nakamura's hand. Doecke Force of Willed the Annul and the Necropotence resolved. Doecke then paid 12 life to draw 12 cards leaving him at 7 life. The feature cards in his Necro draw included 2 Force of Will, 2 Donate and 1 Vampiric Tutor, unfortunately, no Illusions.

At the end of Nakamura's next turn Doecke used the Vamp to place an Illusions as the top card on his library. He then paid 2 life to bring his life total to 2. As a do-or-die play, Doecke attempted to play the Illusions on his following turn. Nakamura tried to counter it with an Annul, but a Force of Will stopped that play. The Illusions hit the table. In response to the 20 life going on the stack, Nakamura used a Capsize to target the Illusions. No counter from Doecke meant that Nakamura was into the top 8.