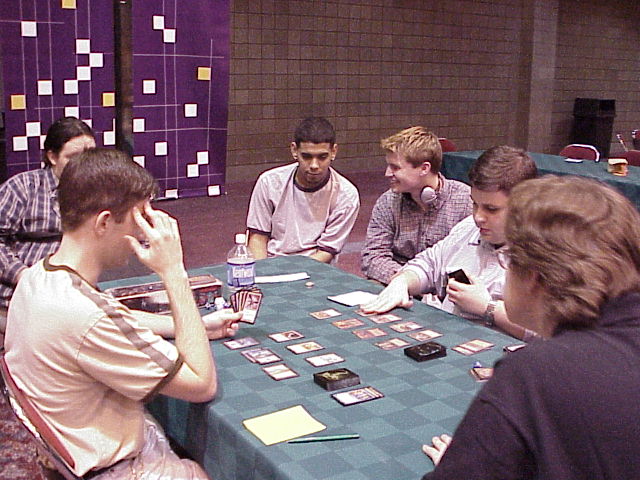 In the final swiss round of GP New Orleans, several players were able to draw into the top 8 based on the strength of their performance in earlier rounds. Several others are on the verge of the top 8, with a match win guaranteeing their slot and a match loss leaving them with a respectable top 16 finish.

Among these are Steve OMS - winner of Pro Tour: Los Angeles '98 - is fighting for the PT points he needs to get back on the Masters Series in Barcelona. His opponent is Sol Malka - a popular Internet columnist who is fighting to qualify. Steve OMS drafted a 5-color green deck. Its base color is green, with cards like Quirion Elf, Frenzied Tilling and Fertile Ground to help generate the mana of other colors. This allows him to play off-color bombs like Blazing Specter.

Sol Malka is playing a solid if unspectacular white-blue deck with a bunch of 2/2 flying creatures for four mana and ground stall. 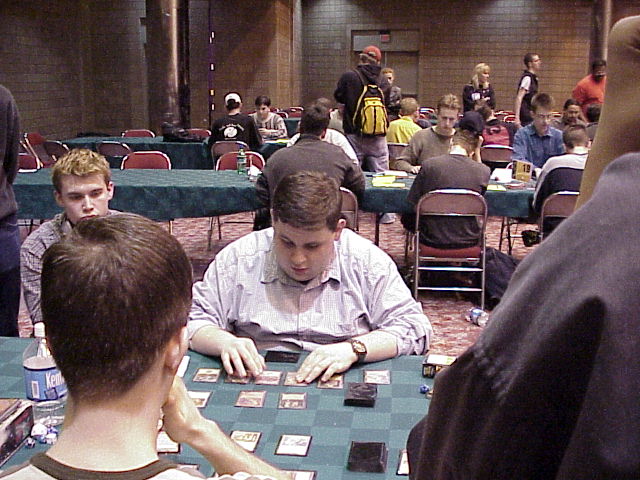 In the first game Malka got stuck on four lands for at least six turns - this is despite him casting a number of cantrips like Restrain and Sway of Illusion. Fortunately for him, OMS did not have an amazing draw either. Malka's ground creatures were enough to stop everything but the Hooded Kavu, which kept on coming over for two points a turn. Absorb and Angel of Mercy bought Malka a lot of time, but Steve had answers to Angel of Mercy and Malka, having completely stabilized the board, was in the position where he could neither stop the Hooded Kavu, nor race it. For five or six turns the game went like this: At the end of Malka's turn Steve would use his Benalish Trapper to tap Darigaaz' Attendant. On his own turn, Steve would "put on the hood" and attack with Hooded Kavu. Sol would use his Tidal Visionary to make another one of his creatures black, and Steve would use his Obsidian Acolyte to give Hooded Kavu protection from black before it could be blocked.

Over the course of the game, Hooded Kavu alone dealt 20 points of damage to Sol Malka. Steve used a Scorching Lava to deal the remaining two points and win the game.

Yavimaya Barbarian and Slimy Kavu applied early pressure to Malka in the second game, but were quickly shut down. Malka had simply too many four casting cost creatures with toughness greater than two. Soon Angel of Mercy and Razorfoot Griffin were on the table. Steve was able to slow the damage down by tapping the Angel every turn, but the roles were now reversed and it was OMS who was taking two points of damage every turn. Malka was able to counter a Blazing Specter with Absorb, and that sealed the game. In the final game, Malka once again followed the same strategy - take some early damage, stabilize with several high-toughness creatures on the ground and begin casting flyers. This time around, he drew a LOT of flyers. 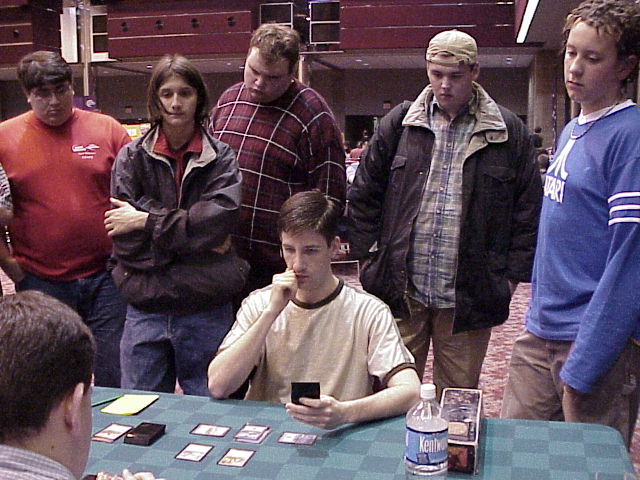 Angel of Mercy, Razortooth Griffin and Glimmering Angel were all coming in, about to make short work of Steve. Down to ten life, he drew his card, smiled, and cast Crosis the Purger! The game was now stalled, with neither player able to attack effectively. There was only a few minutes left in the round, so Malka began playing aggressively and casting more ground creatures instead of leaving mana available to cast an Absorb. OMS used his Slimy Kavu to turn Malka's Island into a Swamp, thus leaving Malka unable to Absorb that turn, and cast Armadillo Cloak on his dragon, Kibler-style! The Dragon came in for eight points of damage, let Steve gain eight life, and forced Malka to discard his Absorb.

Malka top-decked another Glimmering Angel. Between his four flyers, he now had just enough to gang-block and kill the dragon. However, Steve's next draw was just as amazing as his last one. He drew Canopy Surge, killing Sol Malka's entire air force and its commander.