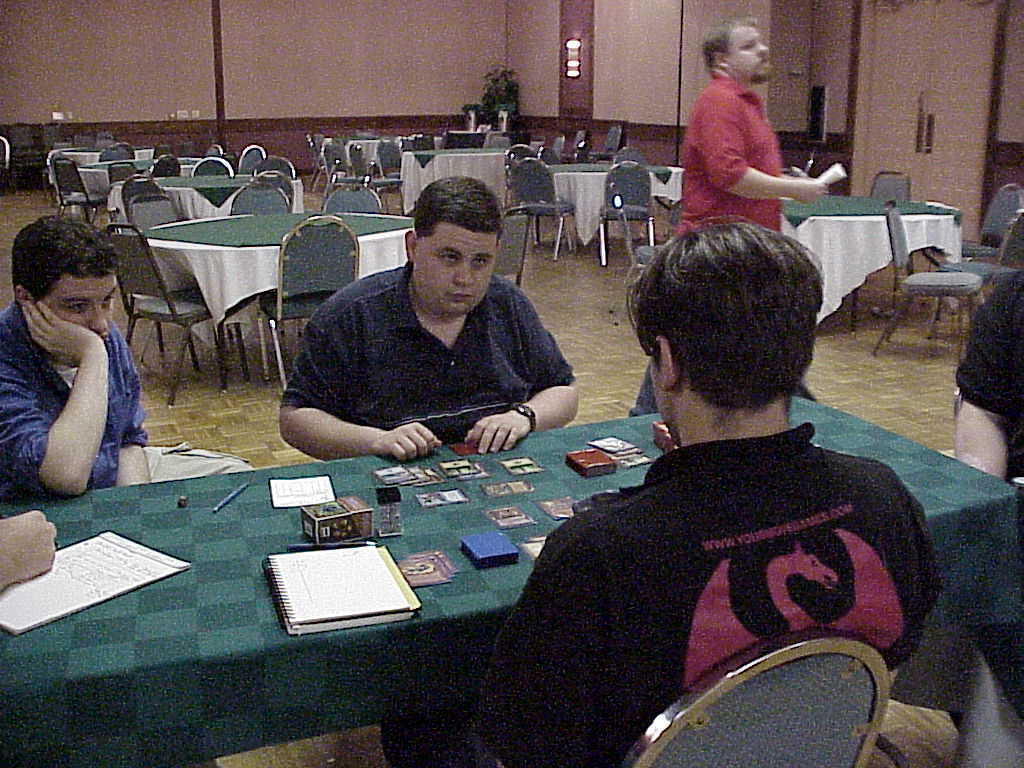 Your Moves Games and Neutral Ground have the "Grudge Match" to determine who is better - Boston or New York. Grand Prix Dallas had the same thing, except this match could potentially have an effect on the top 8. Steve OMS was playing 4 colors to support Dromar, the Banisher (called Nomar throughout the match). Most readers should be aware of the accomplishments of Steve, who is one of the most successful players on the Pro Tour. Daniel Mandel is a relative unknown, a member of the Junior Varsity Your Move Games team, but has only been to one Pro Tour - this year's New York, when he went with Team Monkeypants. Daniel's rating is poor, so he's competing for the under 1700 rating flag prize. Steve wins the die roll, and opts to play. As they are shuffling, Daniel playfully calls Steve a "jerk," even though anyone that has met Steve will say that he is one of the nicest so and so's around.

Steve opens with a second turn Nomadic Elf which Daniel immediately Tribal Flames. Steve follows that up with a Quirion Elf that also meets a fiery death due to the Tribal Flames. Steve O plays a fourth turn Blind Seer, which amazingly doesn't die on the next turn. Daniel stalls on his fourth turn land drop, but plays a Pyre Zombie. Steve has the hits keep on rolling, as he lays a Rainbow Crow, and serves with the Blind Seer. Over the next few turns, both players played a variety of creatures, including Vodalian Serpent, Serpentine Kavu on Steve's side, Viashino Grappler times two, and a Hate Weaver. At this point, Daniel starts drawing into his land and is able to start playing more of his threats, including casting Agonizing Demise on the Serpent with kicker. The Rainbow Crow is the recipient of a Zombie to the head, which leaves Steve a little short on blockers, especially since he traded the Blind Seer for a bought back Pyre Zombie and one of the Grapplers. When Daniel drops an Andradite Leech and a Kavu Aggressor, the game ends with Steve scooping up his cards. 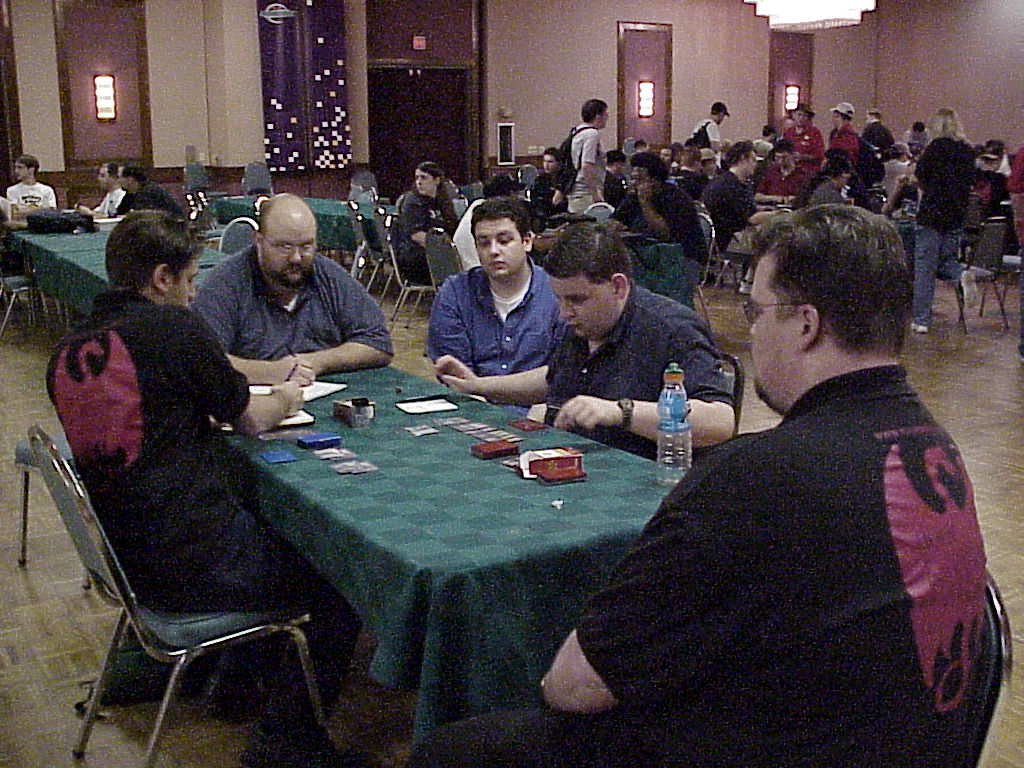 In between games, Chris Pikula makes his way over to the table and asks the OMS brothers when he'll be able to pick up some Type 1 cards for the upcoming Magic Invitational and Dan OMS tells him playfully that they've decided to keep the cards in the off chance that Steve OMS kills someone, so that he'll be qualified for the Invitational as well.

Game 2 is fast and brutal, over in the span of a few turns, as the only spell that Daniel plays is a turn two Ravenous Rats. Daniel didn't draw any red mana, and had a hand full of red cards. Steve simply runs him over with Serpentine Kavu, Blind Seer, and Glimmering Angel.

Game 2 to the Guy from New York

Game 3 started out with a Thornscape Apprentice from Steve and Ravenous Rats from Daniel. Steve didn't play another another spell until turn 5, when he played a Jade Leech. This didn't do anything to staunch the bleeding created by Daniel's turn 3 Kavu Aggressor, turn 4 Ancient Kavu. Daniel blew away the Leech with Agonizing Demise, and continued the beats. Steve played a Pincer Spider with kicker, hoping to be able to make advantageous blocks. Daniel, unfazed, Stuns the Spider and swings again. The next turn, Steve is still hoping to change the flow of the games, and lays a Crimson Acolyte and a Rainbow Crow. Daniel, matched against a Pro Tour and Grand Prix champion, is not intimidated at all, and he calmly Stuns the Spider again. He draws his card, lays the land that he has just drawn, taps all of his remaining mana, and plays Blazing Spectre, and serves with all his troops. The Rainbow Crow takes one for the team and dies in combat with the Spectre. The Apprentice also blocks, and dies horribly. Had Steve had a bit more mana, he would have been able to give some of his creatures Protection from Red, and saved them from death, but he just didn't draw it. Steve drew and played a Shackles on the Ancient Kavu, and passed the turn. Daniel serves again, losing a creature to the Spider, but getting Steve to one life. He also laid a Kavu Runner. Steve drew nothing of note, and scooped up his cards. 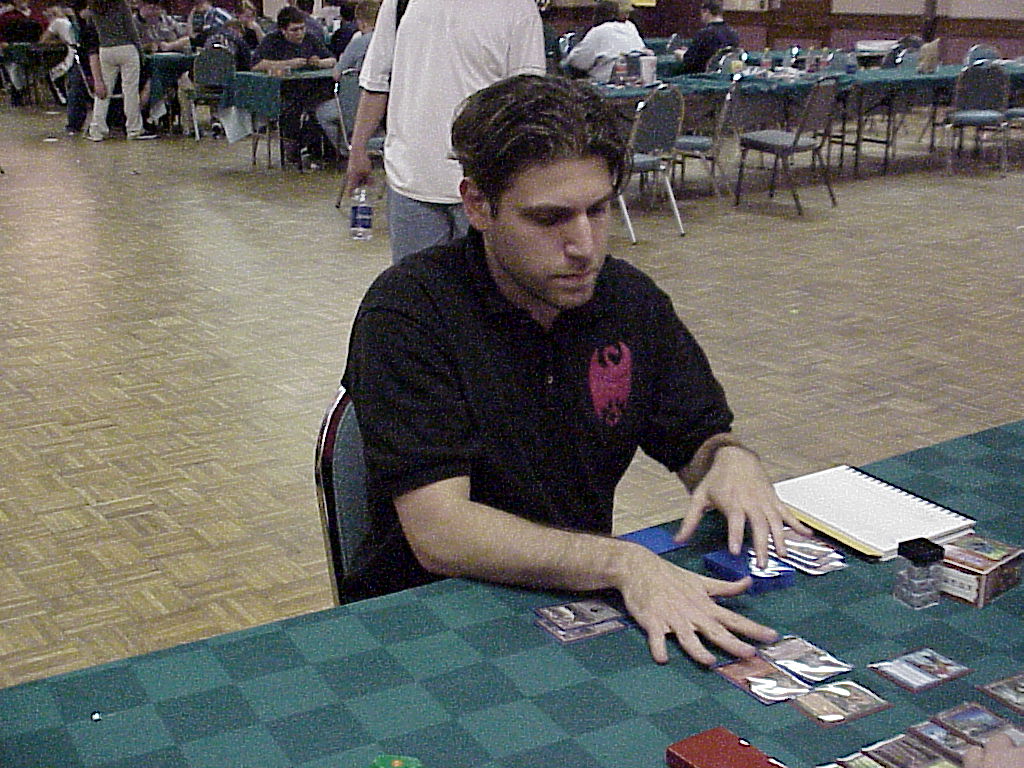 Daniel's win brought him to the brink of the top 8 - in fact, he finished ninth. With the money for 9th place, and the under 1700 prize, Daniel wins 2000 dollars, more than anyone except the eventual winner of the Grand Prix. Not bad for someone with ZERO byes, eh?