Tobey Tamber is a familiar face in Asian Grand Prix. He has made Top Eight at both Taiwanese Grand Prix, and Kyoto as well. His opponent is less well known, but stood at fourth place at the end of round 12. A loss for either means elimination. 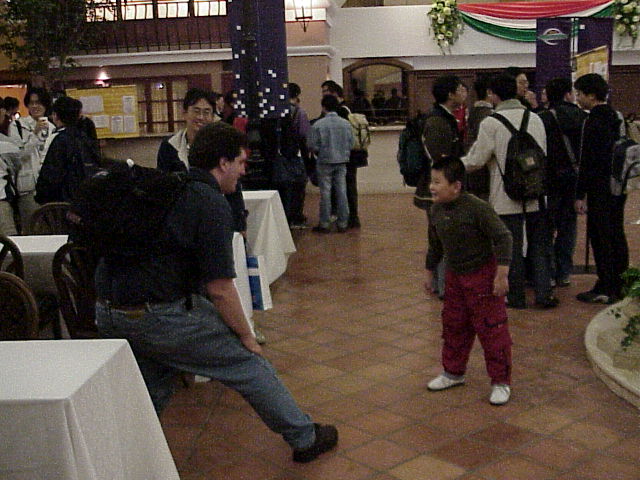 Hwang was forced to mulligan twice in game one. Tamber continued the assault on his hand with a pair of Ravenous Rats. He then turned his attention to his opponent proper, casting Vicious Kavu. He enchanted one of the Rats with Sinister Strength and began the beatdown in earnest.

Even with all that adversity, Hwang kept up a good fight. He traded his Tower Drake for the Kavu, and got an active Samite Pilgrim. It would have made the difference if Tamber hadn't been so threat-heavy. Hwang, at one life, hid behind a Faerie Squadron and Stormscape Apprentice. He lost everything but the Pilgrim staying alive, and had no answer for Tamber's Phyrexian Bloodstock.

So said the man as his two-mountain hand failed to develop in game two. Galina's Knight, Prison Barricade and Benalish Lancer killed him in short order. The whole farce lasted four minutes, and one of those was spent in Tamber's discard phase.

In game three, Tamber stared for a minute at another two-mountain hand. As they say, "Once bitten, twice shy." He mulliganed.

His six-card hand was much better, offering turn-two Shivan Zombie, turn-three Vicious Kavu. Hwang stalled at three land, and cast only Samite Pilgrim and an unkicked Lancer. This gave the Zombie free reign.

Hwang killed a Mire Kavu with Gerrard's Command. He had no blue mana, though, and no green creatures either. Soon, the ten-turn clock had knocked him to six. Tamber played Agonizing Demise with kicker on his Prison Barricade, mistakenly believing that it did damage equal to the creature's toughness. Fortunately for him, he had the game well in hand. This gaffe did not prevent him from winning two turns later.