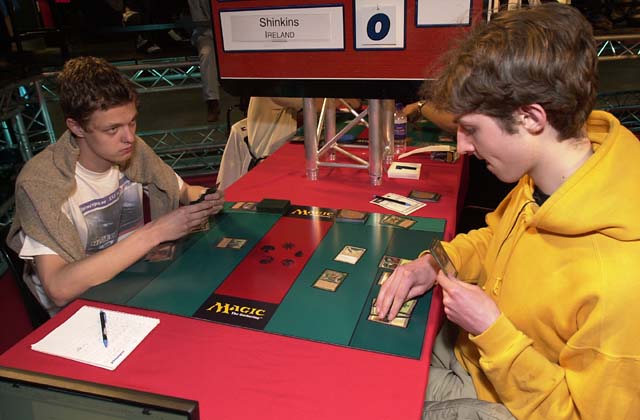 Kolomeyko is a rookie player from Kiev, Ukraine. Being within two matches from possibly (depending on tiebreakers) making Top 8 at your very first Pro Tour is not bad at all. Shinkins, an Irish Pro who competed in six or seven Pro Tours to date is still looking for a title finish, so a win for him would be even sweeter, for all the work he put in. The winner of this round will play the next match for a chance to finish somewhere around 8th-10th, while the loser will play for a shot at a Top 16.

Shinkins was off to a quick start. He played a second turn Quirion Explorer and used it to summon a turn three Rooting Kavu. Kolomeyko used Scorching Lava to remove the Elf from the game, but it did not stop Shinkins. He played a fourth land to cast Aurora Griffin.

Kolomeyko tapped out to Soul Burn a Stone Kavu and gain three life, but took plenty of damage in the next attack step. He went down to five life, then summoned a Mire Kavu, finally stabilizing the board.

Shinkins, who spent his entire hand in these early attacks, drew a land and a Quirion Trailblazer. It was finally Kolomeyko's turn to go on the offensive. He cast Ravenous Rats, dropping a Forest out of Shinkins's hand, playing defensively and keeping four mana untapped for the Death Bomb he was holding.

Shinkins attacked with Serpentine Kavu, prompting Kolomeyko to use the Death Bomb to kill an Aurora Griffin as well. It was a well-calculated plan on the Irish player's part. With that removal spell out of Kolomeyko's hand, he was free to cast Shivan Wurm! 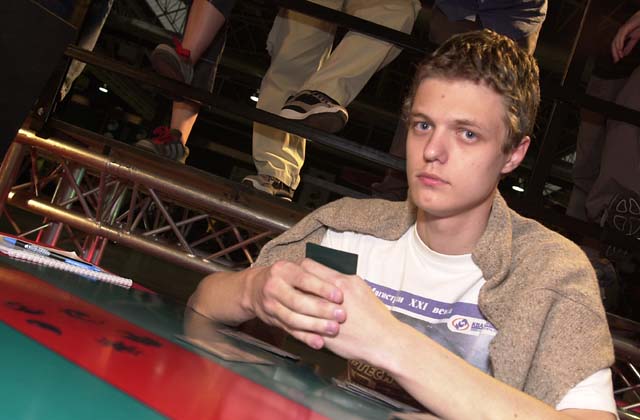 "I need a mighty blocker," commented Kolomeyko. So he made one.

He summoned Lava Zombie, gating a Rat and discarding the Quirion Trailblazer which, in turn, was gated by the Wurm. He then played Sinister Strength on the Zombie, making it large enough to take on Shivan Wurm in combat.

Shinkins drew another land, then a Thornscape Familiar - but no significant threats. Meanwhile, the Ukrainian summoned a Duskwalker and began attacking for five points of damage with it and Battleflies every turn.

Shinkins drew Fires of Yavimaya. He thought for about two minutes, and did some math. Provided Kolomeyko, who had three mana untapped and one card in hand, had no fast effects of any kind, Shinkins was one point away from being able to win that turn via trample damage. He chose not to attack nor to cast Fires.

Shinkins had to mulligan away his hand, but a new draw had potential - with three lands, Harrow, Sunscape Apprentice and an Explosive Growth. 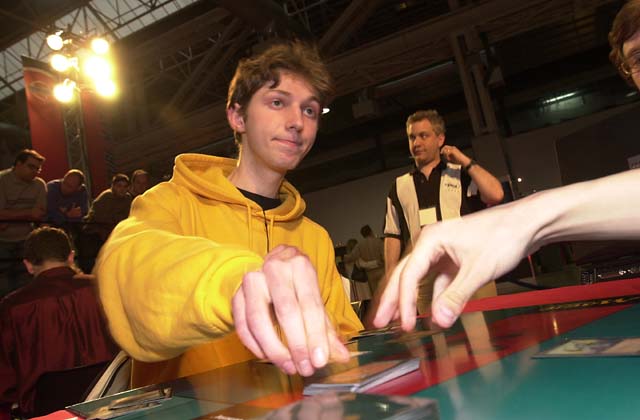 Kolomeyko summoned a Mire Kavu, but chose not to block one attacking Apprentice, waiting to untap and be able to counter some sort of Giant Growth effect.

On his next turn, Kolomeyko enchanted the Mire Kavu with Sinister Strength and summoned Cinder Shade. Shinkins' best available play was to summon a Quirion Trailblazer.