Share Article
Share Tweet Share
Kai Budde, the best Magic player ever, is way way WAYYY out of the running in this event, with a record so bad it doesn't bear repeating. That will not stop him from playing dream-wrecker, however. Zvi Mowshowitz is in the running and needs a good performance in Online Extended to have a chance at the finals.

Both are playing oddball decks. Kai is with "Tight Sight," a blue-green Early Harvest-Mind's Desire combo deck that wins with Brain Freeze. His "tech" was to add white for Sunscape Familiar, a card that was put to good use in Type 2 Desire decks. Zvi is running Psychatog with green for Pernicious Deed and artifact hate in the 'board. He figures Deed is almost an auto-win against Affinity and its artifact lands. Since Kai plays online a lot, I imagine he has actually tested his deck, whereas Zvi's is purely a product of theory. Edge to Kai.

Zvi won the roll and played Mirrodin's Core as his first land. At one point Zvi made the claim that the Core is the best five-color land ever made for control decks--we'll see how it does for him here.

Kai was fortunate to draw a Plains on his second turn, allowing him to drop Sunscape Familiar. The 0/3 Wall is so important because it makes just about every other spell in his deck cost 1 less. Funny enough, after I had seen Kai's decklist, I asked him how often he could play a turn-two Wall with his mana base. "Almost never" was his answer. I guess this game is almost never.

Zvi had a Chainer's Edict for the Familiar (Wait… isn't a "familiar" like a wizard's pet? How is a stone wall a pet? Anyway…). Kai simply replaced it with another Familiar on his turn. Zvi tapped out for Deep Analysis on his turn 4, and Kai played a main-phase Fact or Fiction on his own turn four, choosing three basic lands over two Early Harvests. He played a Forest and a 1-mana Rampant Growth.

Zvi passed on his next turn, then Mana Leaked Kai's Deep Analysis. Kai had no problem flashing it back for one mana, putting him up two cards on the turn. Zvi Cunning Wished for Mana Short at the end of the turn, hoping to hold it and wrench up Kai's combo later.

Each player kept up with card-drawing spells and little else until Zvi played Pernicious Deed and blew up Kai's Familiar on his 7th turn. With Zvi leaving only two mana untapped--not enough for Mana Short--Kai saw his window.

Game 2 was even better. Kai played Wild Growth on turn 2, and Zvi tapped out for Psychatog on turn 3. Kai plays Deep Analysis on his turn 3, Zvi then swings for one and taps out for a Deep Analysis of his own.

Kai then untapped and won the game.

The last card removed was another Mind's Desire.

That Desire was for seven, and he had no problem finding another Desire. He countered his own third Desire with a Memory Lapse just to shuffle it back into his deck (the storm ability still triggers). Kai played a bunch more spells, eventually Cunning Wished for a Brain Freeze and froze Zvi out with about 25 storm copies of the instant "miller." 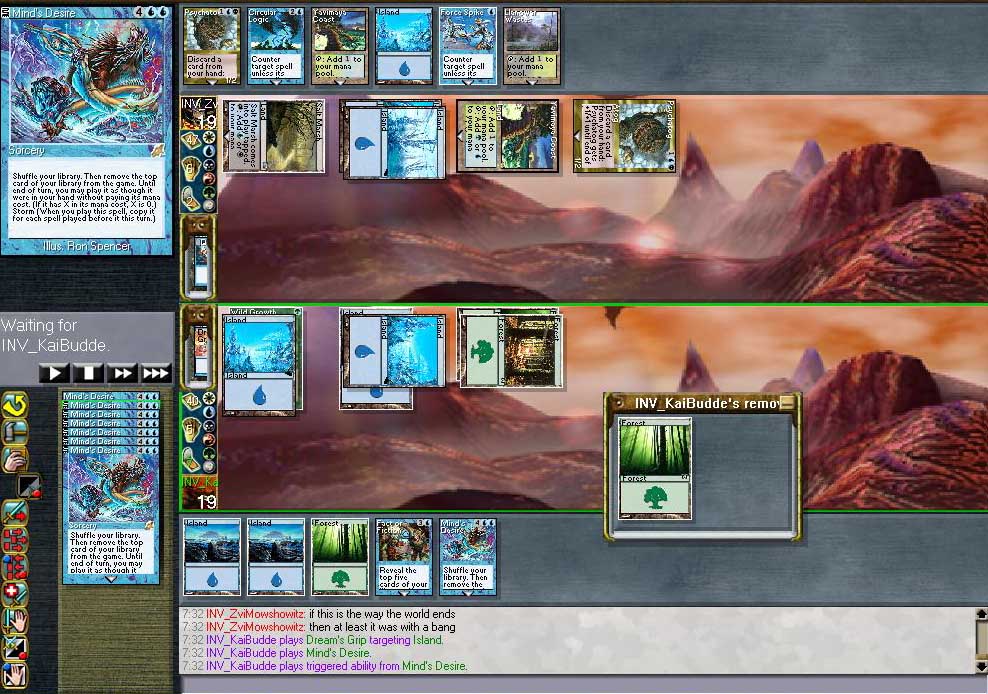