Round 13: Franck Canu vs. Antoine Ruel 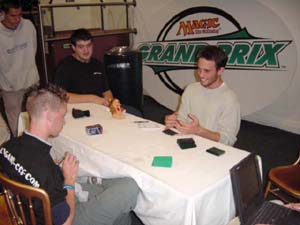 Franck was the first to make a play with a turn 2 Gaea's Skyfolk. Antoine responded swiftly with Pyre Zombie and Franck was left without another play, leaving mana open for a potential Repulse if Antoine tried to kill the Skyfolk. Antoine chose not to and simply summoned another Zombie during his next turn. Franck was only too happy to use a Fire to dispose of both of them as Antoine didn't have enough mana to sacrifice the Zombie in response.

Antoine tried to return and recast the Zombie but it was met first by Mystic Snake and then a kicked Prohibit. Next turn, though, Antoine cast Void, choosing 2 and managed to kill the Skyfolk, a newly played Mongoose and three more cards in Franck's hand! While certainly impressive, this did nothing to stop Franck from making a Jade Leech on his next turn. When the Jade Leech attacked, Franck had enough mana to burn out Antoine with a Ghitu Fire. 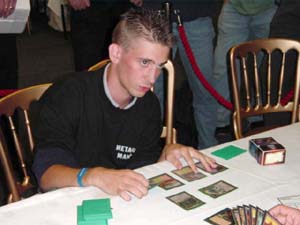 This time, the first creature to enter play was one of Antoine's Pyre Zombies when all Franck could do was play lands. Antoine tried for a kicked Skizzik next turn which was countered with Mystic Snake. Antoine played a Phyrexian Rager but Franck simply responded with Fact or Fiction which left Antoine with the unpleasant choice of two Jade Leeches, a Jilt and 2 Land. Antoine split it with the two forests in one pile as Franck was slightly tight on mana; sure enough, Franck took them and during his next main phase played a kicked Kavu Titan.

Antoine simply tossed a Terminate across the table at it and next turn attacked with both his monsters. By this time Franck also had a Blurred Mongoose, which had joined his Snake and both players were racing. Antoine made another Rager and a Keldon Necropolis and Franck thought for a while but decided that he could not race against Antoine's army and swept up his cards. 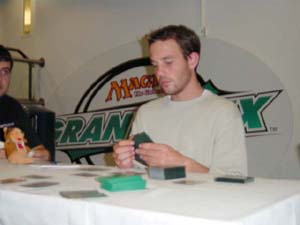 Franck played first and brought out a Gaea's Skyfolk but didn't look too happy when Antoine made a Nightscape Familiar and sat thinking, looking at his cards for a long time. Franck played a Jungle Barrier to hold off the Familiar and any other potential attackers but this was met by a swift Void from Antoine which also took a Jade Leech and Mystic Snake from Franck's hand.

While Antoine was tapped out Franck used Fire to kill the Familiar and summed a Kavu Titan. Antoine busted out a Flametongue Kavu to kill the Skyfolk and Franck tried for a Jungle Barrier which was Terminated but he had another Barrier which he played next turn.

Antoine tried to kill the Titan with a newly played Pyre Zombie but it was saved by a Repulse and the Titan came back but this time kicked.

Antoine made some monsters to try and hold off Franck's army and tried to kill the kicked Titan with a Terminate but again it was saved by Repulse. Franck seemed frustrated by Antoine's Pyre Zombie and wasn't best pleased when Antoine managed another Terminate for the Jungle Barrier. Antoine used the opportunity to attack with all his creatures and when the dust cleared Antoine was left with two Pyre Zombies in play and nothing on Franck's side of the table.

Fortunately for Franck, he managed to slap another kicked Titan onto the table but Antoine had yet another Terminate which he sheepishly played. Franck had to resort to desperate measures when he used a Mystic Snake as an instant speed blocker to kill one of the Zombies but couldn't come back, flipped his hand of land onto the table and scooped.